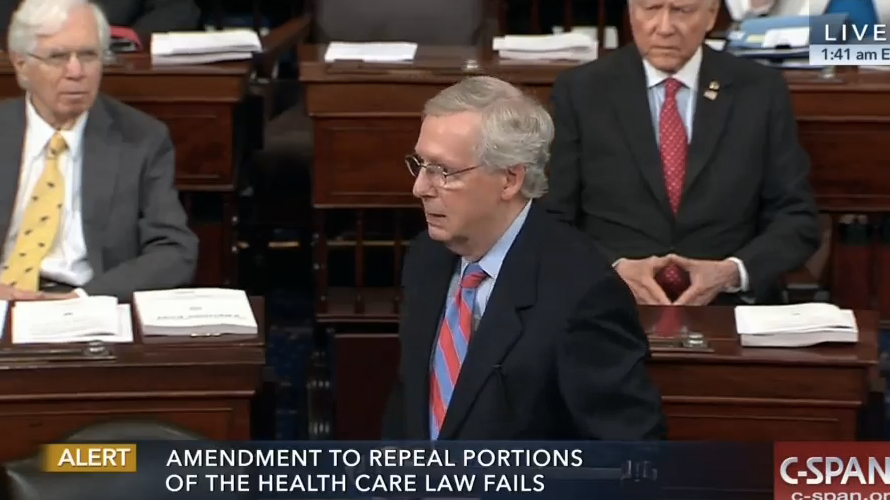 In the post-vote analysis, the question of which Republican saved the Affordable Care Act, aka Obamacare, is one whose answer depends on the story that is being told.

Was it Sen. John McCain, who returned to Congress after surgery and a cancer diagnosis to finally do the right thing after first voting to begin debate on unknown, unseen legislation? Was it instead Sen. Lisa Murkowski and Sen. Susan Collins, who consistently delivered nays throughout the entire unorthodox ordeal, unswayed by external influences save for the needs of their consituents? Or was it a necessarily joint effort of all three?

Let’s take a look at some of the interpretations:

Gail Collins wrote in The New York Times that “John McCain’s ‘no’ vote was the high point of the drama, but Collins and Murkowski were the fierce, consistent forces of resistance that gave McCain his opportunity.”

She also reminded us of how it was not just Democrats who were shut out of the GOP’s healthcare bill writing process, a point that turned out to be critically important:

But Collins and Murkowski care a lot about women’s issues; their joint stand was the logical outcome of a year that’s been marked by an utter Republican indifference to women. Both serve on the Senate committee that handles health care — a fact that did not appear to impress Majority Leader Mitch McConnell when he appointed 13 men to get together behind closed doors and write a health care bill.

Slate’s Christina Cauterucci also put the focus on Collins’ and Murkowski’s show of strength in the face of coercion:

Weaker legislators might have stuck to the party line in defiance of their consciences. (See: the Republican senators who said they’d only vote for the bill if they got a guarantee that it wouldn’t become law.) Standing up to a crowd of peers making glib references to physical violence and real threats to legislative priorities could not have been easy.

Vox’s Alexia Fernández Campbell made a similar observation, writing that “McCain’s vote was crucial in ending the latest health care repeal effort — but no more so than the votes of Murkowski and Collins, which were consistently courageous in the face of threats and suggestions of retaliation.”

Throughout the entirety of 2017, Collins stood resolutely against the GOP’s urge to placate its anti-government billionaire donors by passing legislation that was historically unpopular with the public at large. Even before President Donald Trump began his term, the Maine Republican had the courage to stand athwart history telling her party to stop trying to take away people’s health care. Collins is literally the only GOP senator currently serving who declined to support the party’s numerous sham votes against the Affordable Care Act while Barack Obama was still the president.

McCain killed his party’s narrowly-crafted Obamacare repeal bill Friday not because he was opposed to dismantling the Affordable Care Act, but because he fundamentally believed the process — the lack of hearings, the one-party, closed-door negotiations, the fact that in the end all that Republican senators could agree upon was a shell of the plan they’d promised — was flawed.

At The Atlantic, David A. Graham argued that there was a consistency in McCain’s seemingly inconsistent vote on the motion to proceed and his final vote against skinny repeal.

John McCain is not, despite some of the most fevered denunciations, a man without principle. Under intense pressure Thursday night and into Friday morning, he refused to budge. But his principles are unusual—he values process, decorum, and Senate traditions to a degree that many observers find strange—and anyone who expects him to be a hero for their own ideological cause is likely to be disappointed.

In The New Republic, Sarah Jones argued against hero status for any or all of the three:

[T]hough they deserve credit for their votes, it’s a mistake to anoint them heroes. We are setting the bar abysmally low if making the only sane, humane choice is considered heroic; and these senators have not shown that they are allies in the fight to expand the American safety net—in fact, quite the opposite.

The real heros, for Jones?

Obamacare’s real saviors have been dragged out of wheelchairs, arrested, and assaulted for weeks. They are, as you would expect, the people who stand to lose the most if Obamacare is repealed. They are people with disabilities: activists associated with ADAPT, and the unaffiliated individuals and carers who came forward to share their experiences and to demand better from the GOP.

We get the desire to write out a hero narrative in the wave of the repeal vote, a fitting end to something that has played out like a drama both on C-SPAN 2 and in the abundant post-vote write-ups. Drama is exciting. Winners, losers and heroes are understandable tropes.

But that is not the truth at the nexus of healthcare legislation and Congressional procedure, which is messy, complex and confusing. While it makes for a nice story, a focus on the players involved, on the admittedly breathtaking moments that played out in the Senate during the early more hours on Friday, will not do much to help people figure out what the hell is going on. That will take a lot more than a tidy narrative.