Say what you want about the worlds of virtual reality and augmented reality—it’s gimmicky, it’s revolutionary, it’s expensive. But while it’s still too early to tell where it’s going or how big of a phenomenon it’ll be, the emerging medium clearly is not going to disappear anytime soon.

At the 2019 Consumer Electronics Show this week, many of the major VR and AR companies will be at the Las Vegas Convention Center giving demos and making announcements about their latest hardware and software. On Monday, HTC announced two new VR headsets, along with a number of integrations including Mozilla Firefox and a VR platform it wants to become the “Netflix for VR.” Also expected this week is a keynote speech by MagicLeap Chief Technology Officer, along with return appearances by Samsung’s VR rides and demos from Facebook’s Oculus.

None of the VR and AR demos or device announcements mean the future is overly bright for the industry. While IDC projects global spending on AR and VR to total $20.4 billion this year—a nearly 69 percent increase over 2018—headsets still haven’t become a household item, even with a decrease in prices.

While CES marks the start of the year in tech news, there are plenty of other AR, VR and MR announcements expected throughout 2019. Here are a few: 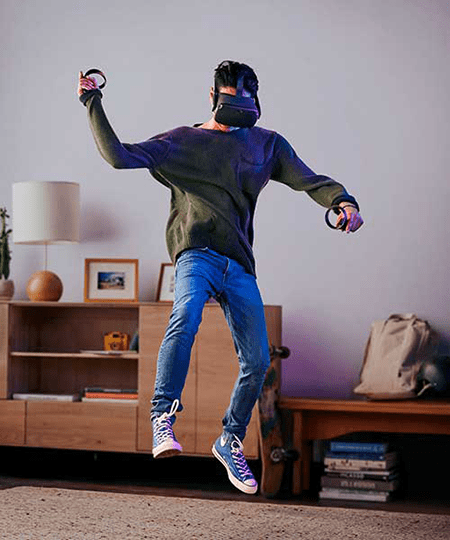 Announced last year, Facebook’s standalone Oculus Quest promises to have the portability of its lesser-powered Oculus Go, combined with the freedom to walk around a room like the flagship Oculus Rift. While it won’t be as powerful as the Rift, it will be about the same price—around $400—but without any need to buy an expensive gaming computer (which costs another $1,000).

The Oculus Quest, expected out this spring, follows a major marketing pitch for Oculus Go. Along with digital billboards and other out-of-home ads, Facebook recently began running a TV campaign featuring a number of celebrities touting various uses of the headset, from watching sports with friends to watching movies and concerts at home.

It’s been three years since Microsoft debuted its original Hololens headset, which has for better or for worse avoided the hype of rivals like the Magic Leap One. But while Magic Leap’s first developer headset is aimed at building out partnerships for both recreational and commercial uses for whenever the consumer-grade model becomes available (possibly later this year or next), the Hololens has been going all in on B2B.

Though the HoloLens 2 was expected to debut in 2018, it’s now rumored to be coming sometime this year. And while the original has already been used to help NASA build the Orion shuttle, Microsoft has been criticized for its $480 million contract with the U.S. military to equip as many as 100,000 soldiers with their own AR headsets. (According to Bloomberg News, the company’s bid beat out Magic Leap.)

Last fall in Los Angeles, Magic Leap played host to a two-day event that let developers, creatives and press try out the company’s mixed-reality headset for the first time. After years of secrecy, the debut came alongside a number of partnership announcements—the Royal Shakespeare Company, director Peter Jackson’s studio, Disney ILMxLab and more than a dozen others, including brands like Wayfair and New Zealand Air. The company also unveiled an ambitious—and extremely vague—road map for what it’s calling the MagicVerse that could transform how we see the entire physical world, from homes to street to downtown districts.

While Magic Leap’s vision is impressive, its promises leave room for doubt. For example, the company still doesn’t have a consumer-grade headset on the market. However, now that developers have been able to buy headsets for several months, and with Magic Leap growing a partner program for both indie developers, there will likely be more uses unveiled this year. (AT&T is also building a 5G network on Magic Leap’s campus as the company’s exclusive wireless partner.)

While clunky mixed-reality headsets like Hololens and Magic Leap might be more impressive by projecting a digital world onto the physical one, AR glasses that are more utilitarian but stylish could also gain interest this year. In November, a Canadian startup called North opened two new brick-and-mortar stores for its own AR glasses. The company, backed by Amazon, has created a $999 product called Focals, which lets users view messages and other information on a digital display within the lens and also access Amazon’s Alexa smart assistant.

North isn’t the only player in the AR glasses category. Vuzix, a Rochester-based company, is debuting its consumer version of the Blade AR glasses this week at CES, which come equipped with Google’s Assistant and are a bit more thick than the Focals. (Like its Canadian competitor, the Blade costs $999.)

Another category to watch—and especially to listen to—is the world of spatial sound. Like other types of AR, AR sound lets users discover different sounds based on where they are by using technology to interact with digital pinpoints invisibly mapped to the real world. The world of AR sound could present a number of opportunities for enhancing tour guides, podcasts, bands and games. 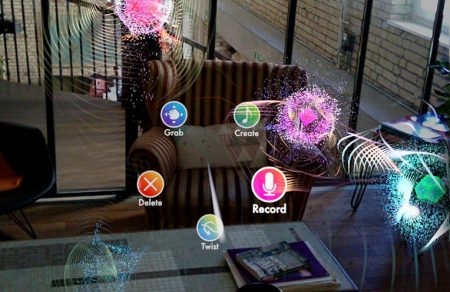 The technology has already been experimented with through collaborations between Magic Leap and the Icelandic Band Sigur Ros. Premium headphone manufacturers like Sennheinser have also already released a pair, and Bose is rumored to be working on a pair of its own.

Another place to glimpse the future of AR and VR is at this year’s film festivals. Last year, the Tribeca Film Festival increased the space available for immersive storytelling, and later this month Sundance Film Festival will do the same. Meanwhile, apps for smartphones and tablets will likely be a more accessible way for people to try AR for the first time, including a new AR tour of David Bowie’s archives and a children’s app for interactive storytelling.