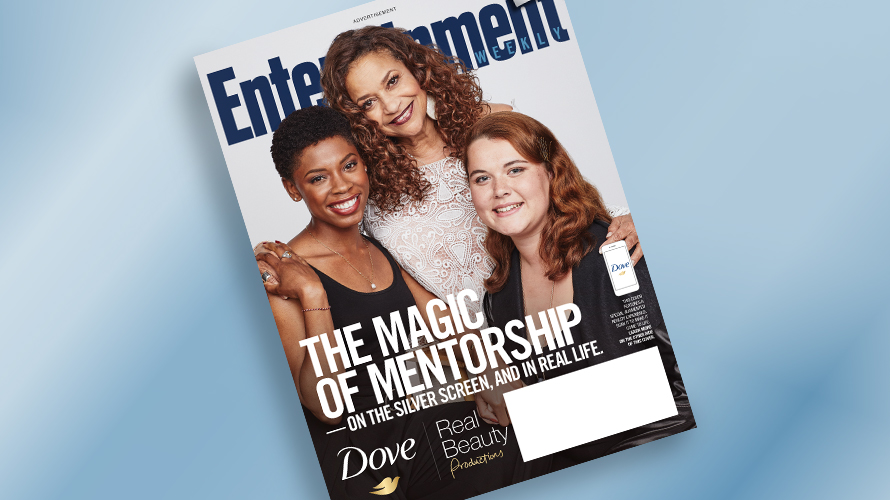 Dove wanted to treat its latest Real Beauty Productions film like a big movie production, so it secured the cover of Entertainment Weekly—a peel-off cover, that is.

“Readers love anything new and exciting and to be the first ones sharing it and talking about it,” said Ellie Duque, svp and publisher of EW.

The advertisement will be augmented-reality enabled, so once readers download the Life VR app, they can scan the cover and watch the film, which is directed by Debbie Allen.

The film, “An Hour With Her,” features two women, Chelsea and Caralyn, who talk about self-esteem in the face of bullying. Bullying caused depression and anxiety for Chelsea, now an actress, who found comfort in the Dove Self-Esteem Project. In the film, she sits down with Caralyn, a high school student who has been affected by cyberbullying, to talk about moving forward.

“I think really this year, we’re telling the story of the power of mentorship and paying it forward to the next generation,” Stepanian said. “It’s still very much about the empowerment of young women, but I like that it’s helping the next generation grow in confidence through the experiences they’ve had.”

The Dove campaign will run a total of three times with EW. The first cover is on sale Friday, with the second arriving July 13 and the third Sept. 28. Dove worked with Edelman on the film’s production and with media agency Mindshare to promote its release.