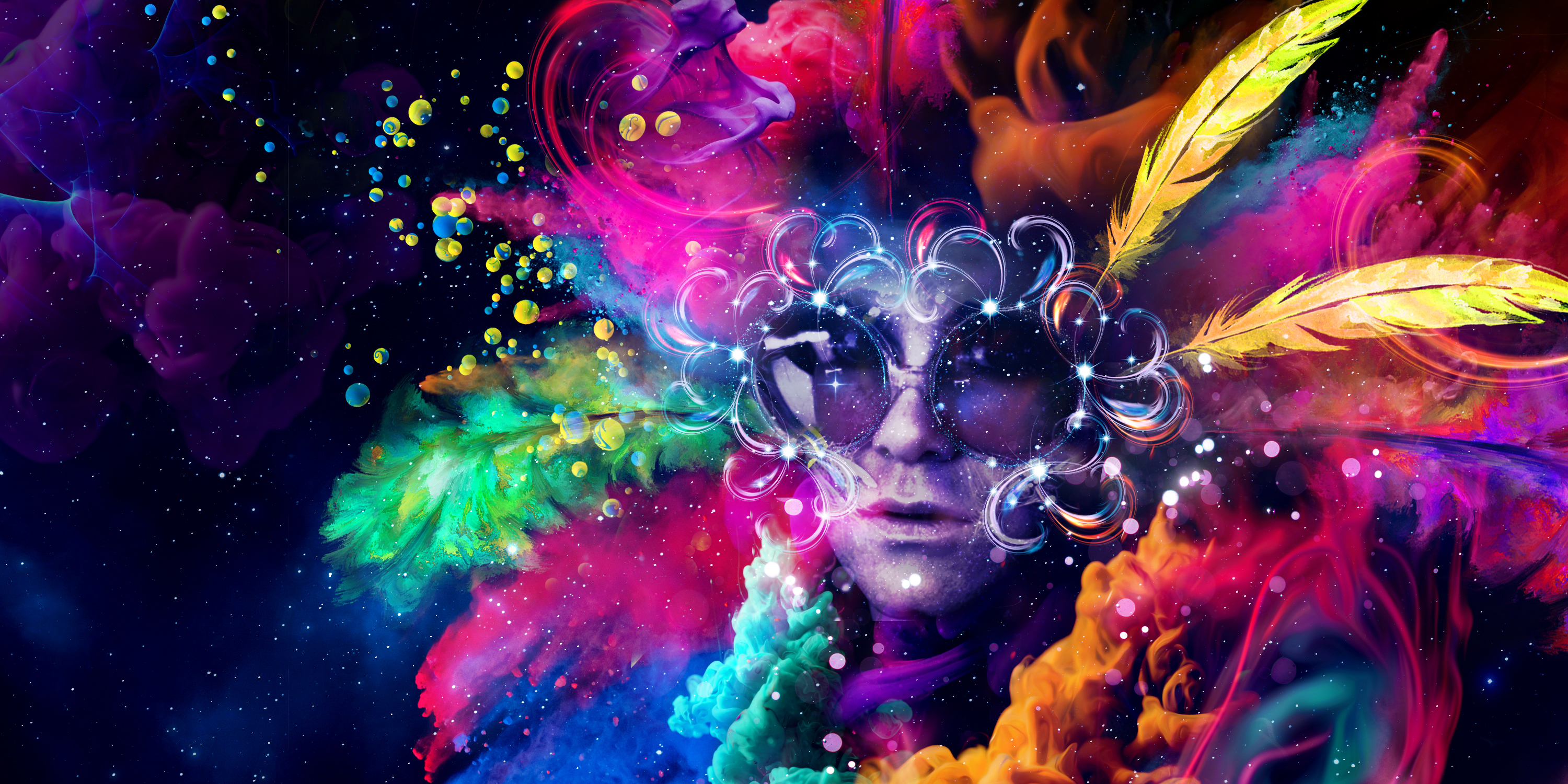 A cryptic invite for a “special event” hosted by the artist included clues like “I’ve finally decided where my future lies” and “a special announcement delivered in a revolutionary way.” The event, which brought more than 100 journalists to Gotham Hall in New York City and was livestreamed through a partnership with Google, used virtual reality to bring an audience on a trip through a few of John’s seminal moments.

Members of the real-life audience were given a Samsung Gear headset (as well as instructions on how to use it) and watched a young John “perform” at his first U.S. gig at the Troubadour nightclub in 1970, followed by his famous Dodger Stadium show in 1975. The six-minute VR film was streamed simultaneously to audiences in Los Angeles and London. 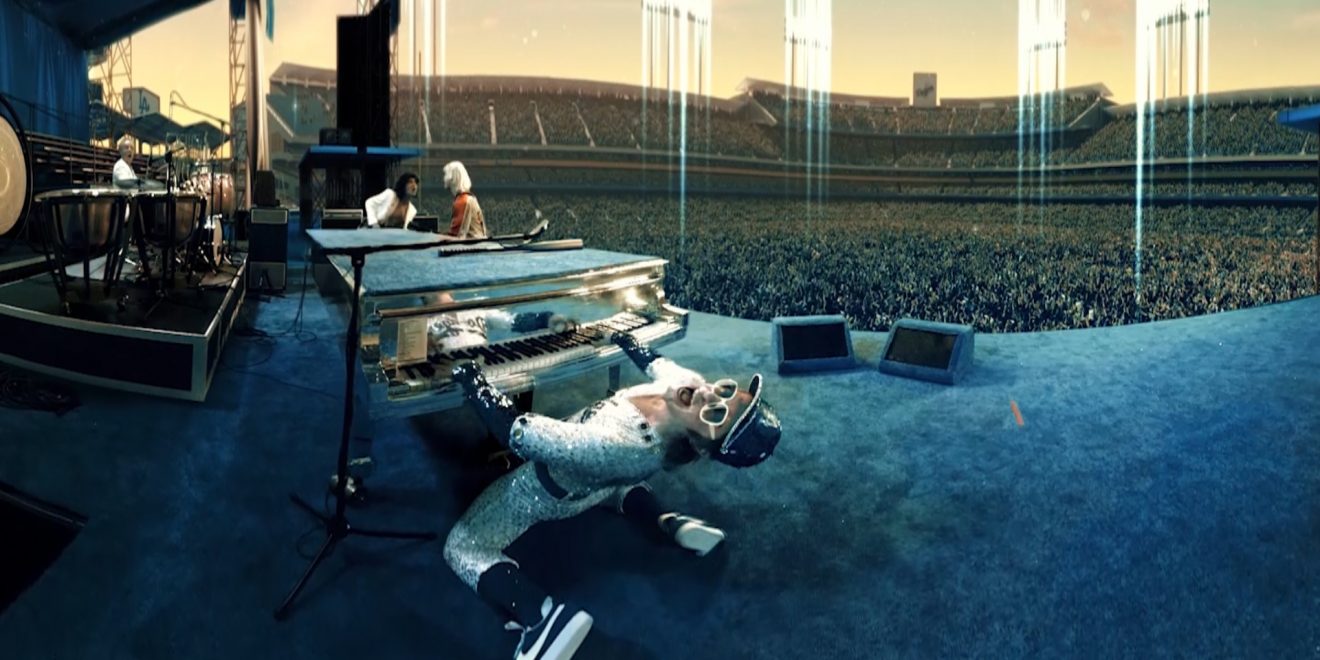 The VR version of John performs in front of thousands of computer-generated fans.

The Troubadour and Dodger Stadium footage is all manipulation, as is 1970s John himself. As there is no footage (outside a few grainy photos) of his Troubadour show, Spinifex—the agency that created the VR film—needed a body double to match the body dimensions of a 23-year-old John. “It was one of the most amazing parts of the process, because we’d done the green screen shoot, and we shot the Troubadour on August 25th last year, and his opening show was just two blocks down the road, 47-years-ago to the day when we shot,” said Spinifex CEO Ben Casey.

Casey and his team—upwards of 50 creatives, animators, designers and engineers, though the number balloons to 150 when factoring in the livestream crew—recreated all of John’s outfits to “a complete authentic spec.” The computer-generated John morphed through the ages, including his famous ocular wear, which helped avoid the dead-eyed look of a CGI person. Using state-of-the-art technology and a little magic, Spinifex basically recreated John’s career, from the sparkling sequins of his costumes to a weird acid trip-like sequence of rockets and space (because, after all, John is the “Rocket Man”). 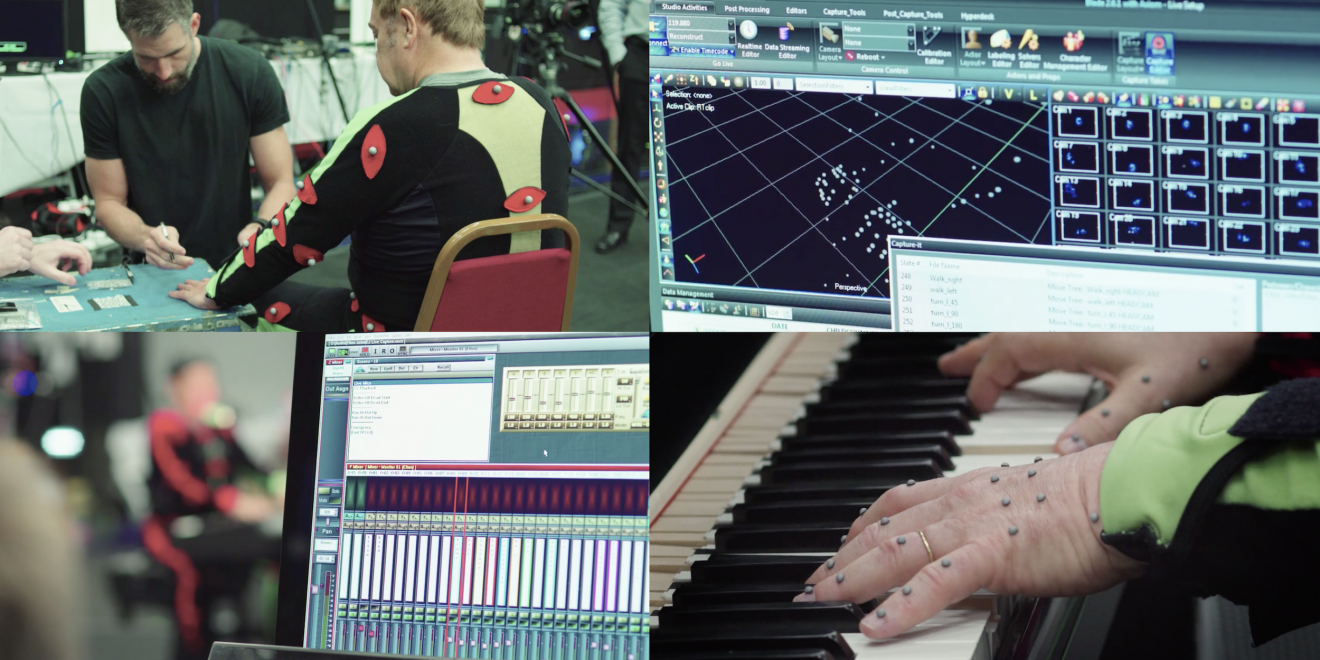 As they were building out the VR experience in London’s Pinewood Studios, Casey and five others were in a room listening to John (who was in a motion-capture suit and rig) play 10 songs, capturing him tickling the ivories. In VR, the fingers played the right notes.

“As we sat in the studio, this idea that what we were doing looked very alien with all of the motion capture, it felt … detached,” Casey said. “And yet, the end result of the experience would be to create the intimacy that we felt in that room for everyone.”

At the NYC event, headsets were passed to the audience; the choice of hardware was calculated, as Casey said that Samsung is the only one with the ability to pull this off. Dealing with livestreaming to handsets through apps using stereoscopic 360-degree content was “going to have a lot of heat issues with pretty much every other product,” Casey said. “And quite frankly, we only had the choice of one handset.”

The film finished, and the audience was treated to a mini-concert. While John was clearly the star of the show—he performed two of his classics, “Tiny Dancer” and “I’m Still Standing”—the VR experience was a strong supporting actor.

Getting to the final product was almost a year in the making. “We were out in L.A. [last year] for the Oscars doing his Oscar party,” Casey recalled, “and we had heard about a future project that he’s got planned and [his team] were starting to solicit some advice on that. And we kind of stepped in at that point and we said … ‘You really need to take your expectations up higher. You’re going to need to bring them some more firepower or something more sensational.”

Casey’s team took John’s team through a few ideas, and he said they were “blown away.” “[A]nd they said, ‘We have something that we need you to redirect your focus to,” he explained. “We have this we have this farewell tour. And we wondered how you would approach that.'” Several weeks later, Casey cooked up ideas—including the kernel of the show—while in London presenting to John’s husband, David Furnish.

So how did the VR work as a recreation of those key moments of John’s musical career?

“[Doing this in VR] wasn’t my idea,” John said at the event during a Q&A with the audience. “Having seen it, it was amazingly successful. It was pretty special.”

Don't miss Adweek NexTech, live this week, to explore privacy, data, attribution and the benchmarks that matter. Register for free and tune in.
@joshsternberg Josh Sternberg is the former media and tech editor at Adweek.