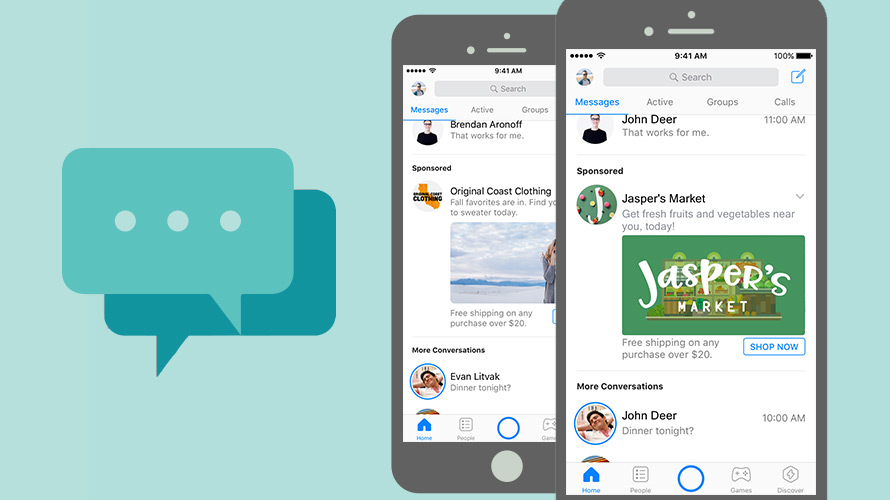 Facebook is ready to bring ads to new territory: Messenger.

Starting today, the social network is starting to roll out display formats within the previously ad-free app, giving brands a way to be front and center for Messenger’s 1.2 billion users, while also giving Facebook a new place to continue scaling its massive advertising business.

While the ads have been tested in Thailand and Australia since earlier this year, Facebook is now planning to expanding the beta globally, allowing advertisers to access inventory for existing and new campaigns.

According to Facebook product manager Ted Helwick, the ads will appear in the Home tab—the same place where the company has been testing them internationally since January–which a small number of users will begin seeing over the next few weeks.

“This is immediately scalable and applicable for people,” he told Adweek. “And separately we view this as a number of ways we help businesses drive outcomes with people through messenger.”

Given that Messenger has 1.2 billion users, the move points to where Facebook could be heading as it looks for more places to show ads rather than bogging down existing placements. That could be good news for investors—over the past couple of financial quarters, executives have warned that ad load is expected to slow.

Facebook’s existing advertising business is massive. The company isn’t scheduled to report second quarter revenue until later this month. However, ad revenue in the first quarter of 2017 was $7.86 billion, up 51 percent year over year. (Last week, James Cakmak, an analyst with the firm Monness, Crespi, Hardt & Co., estimated Facebook’s second-quarter ad revenue could be up 43.1 percent to total $8.93 billion.)

Asked if Facebook plans to begin reading messages between users for better targeting—much like Google has done for years with Gmail—Helwick said it doesn’t plan on it. Rather, Messenger ads will have the same targeting capabilities available across other Facebook properties such as the newsfeed and Instagram.

When the ads first began appearing earlier this year, some people noted how large Messenger ads seemed compared with the rest of the app. He said the format has been updated since then, with a single image or carousel formats available for launch.

“The analogy here is just as Newsfeed has evolved over the years, this is something that is going to evolve as well,” Helwick said. “And we’re going to do the right thing for businesses and consumers.”