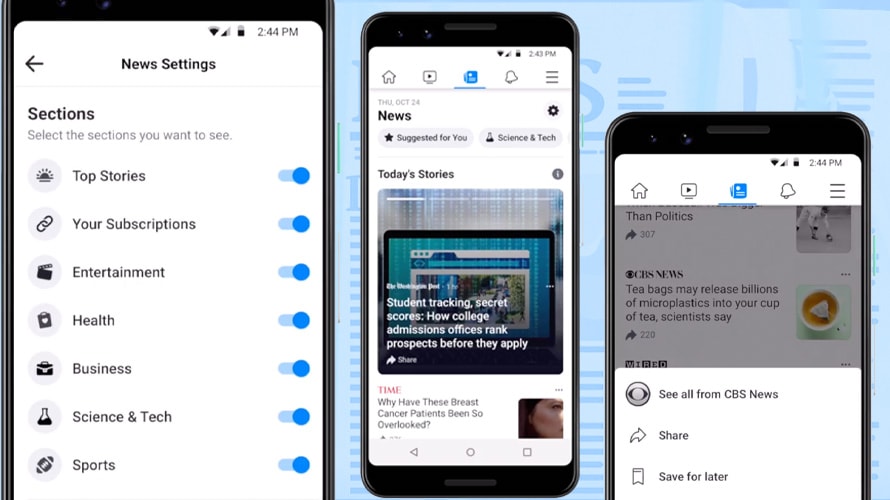 Facebook announced it’s rolling out a standalone news tab in its mobile app today in an effort to highlight the journalism from hundreds of news publishers—and paying those that take part.

Facebook News, as the initiative is called, is debuting to a subset of the company’s U.S. audience. It’s a move that will highlight the work of roughly 200 news outlets, including national outlets like The New York Times and Dow Jones, along with smaller, state-specific papers, like The Chicago Tribune. It’s also a move that signifies the tech giant stepping squarely into the news delivery role that it’s historically shirked in the past. The company’s been caught not only de-emphasizing hard news as a part of its flagship feed, but have also scrimped on revenue and insights publishers could earn through other news-related offerings like Instant Articles, which hoovered news content and revenue directly from publishers’ sites.

“Journalism plays a critical role in our democracy,” the company said in a statement announcing the debut. “People want and benefit from personalized experiences on Facebook, but we know there is reporting that transcends individual experience. We want to support both.”

Despite the critical role journalism might play in a democracy, Facebook hasn’t always seen it playing a critical role in its business strategy. Last year, Facebook CEO Mark Zuckerberg shrugged off the calls from BuzzFeed’s Jonah Peretti and News Corp’s Rupert Murdoch, who suggested that Facebook pay publishers a yearly fee in exchange for content.

“I’m not sure that makes sense,” Zuckerberg said at the time. “People come to Facebook primarily not to consume news but to communicate with people.”

The same year, Pew Research put out a report finding that two-thirds of Americans get at least some of their news from platforms like Facebook and Twitter.

The news tab debut might be a symbol of Facebook embracing its role as a conduit for news, but that doesn’t mean it’ll embrace every publisher. Those who want to take part in the offering need to be registered as a news organization on the platform, have to serve a “sufficiently large audience” and must adhere to the platform’s publisher guidelines, which crack down on news organizations that peddle misinformation, hate speech or clickbait. While these publishers include nationally recognized outlets, it also includes organizations like the right-leaning Breitbart, which has historically parroted white nationalist talking points.

Facebook will shell out anywhere from $1 million to $3 million annually to include its articles in the news tab. Unlike the ill-fated Instant Articles initiative, links to news stories will direct users outside of Facebook’s feed proper and into the publisher’s native website, keeping traffic numbers up and ad revenue flowing in.

@swodinsky shoshana.wodinsky@adweek.com Shoshana Wodinsky is Adweek's platforms reporter, where she covers the financial and societal impacts of major social networks. She was previously a tech reporter for The Verge and NBC News.