After only being available on the mobile app, this ephemeral video element may be coming to Facebook's web version.

Facebook confirmed that the option of making Facebook Stories public so that followers can see them was rolled out a few weeks ago and is now available globally.

Social media researcher Carlos Gil was one of the first to tweet about the new feature.

Users who click the Add to Story button on their home screens and add photos or videos to their Facebook Stories can then tap the three dots in the top-right corner to access Edit Story Settings, where they can choose between friends and public. 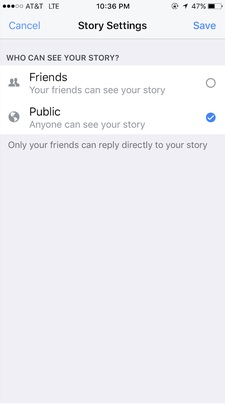 A follower count will be added next to the viewer count listing friends who viewed Stories.

Facebook notes on that screen that only friends can reply directly to Stories.

The new feature is ideal for users such as celebrities, public figures and journalists who have a large number of public followers.

Facebook Stories had only been visible to friends since rolling out in March, with users having the ability to control which friends saw specific Stories.