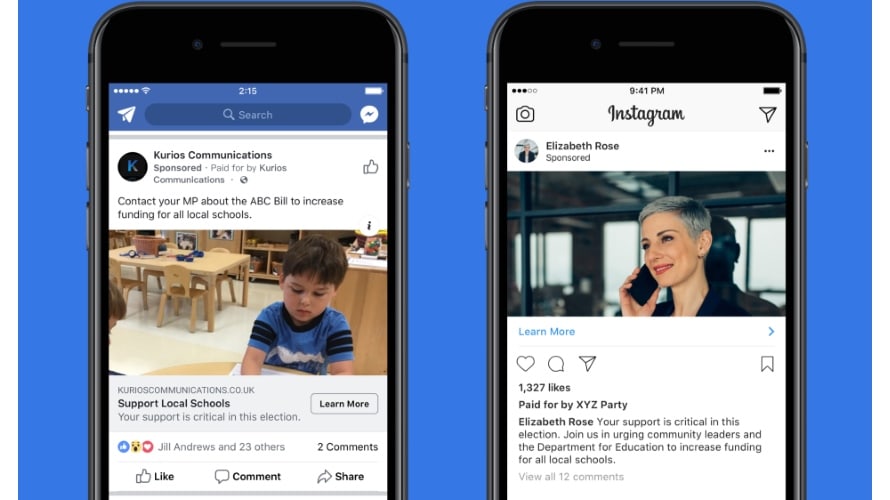 Facebook is extending several of the initiatives regarding political advertising that were recently introduced in the U.S. to the U.K.

Vice president of global public policy Richard Allan and director of product management Rob Leathern revealed in a Newsroom post that starting Tuesday, all advertisers seeking to run ads in the U.K. “that reference political figures, political parties, elections, legislation before Parliament and past referenda that are the subject of national debate” must verify their locations and identities, and those ads must include disclaimers indicating who paid for them.

When people click on that “Paid for by” label, they will be taken to Ad Library, the U.K. version of the Ad Archive that Facebook introduced in the U.S. in June, where they will be able to access information including the ad’s budget range, the number of people reached and other ads being run by that page.

The Ad Archive/Ad Library is available to everyone here, regardless of whether people have Facebook accounts.

Just as in the U.S., if someone sees an ad that they believe contains political content and is not properly labeled to reflect that, they can report it to Facebook via the three dots in the top-right-hand corner. Ads that violate Facebook’s political advertising policy will be taken down and added to the Ad Library, and advertisers behind those ads will be prohibited from running political ads until they go through the social network’s authorization process.

Allan and Leathern wrote, “While we are pleased with the progress we have seen in the countries where we have rolled out the tools, we understand that they will not prevent abuse entirely. We’re up against smart and well-funded adversaries who change their tactics as we spot abuse. But we believe that this higher level of transparency is good for democracy and is good for the electoral process. Transparency helps everyone—including political watchdog groups and reporters—keep advertisers accountable for who they say they are and what they say to different groups.”