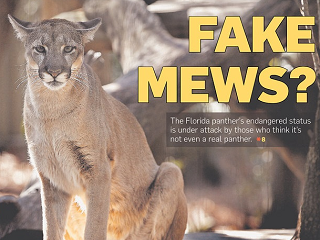 Florida’s state animal the panther, selected in 1982 by a student vote, has been on the area’s endangered-species list since 1967. But as The Tampa Bay Times’ free daily TBT noted, it’s now time for a routine review of that status. 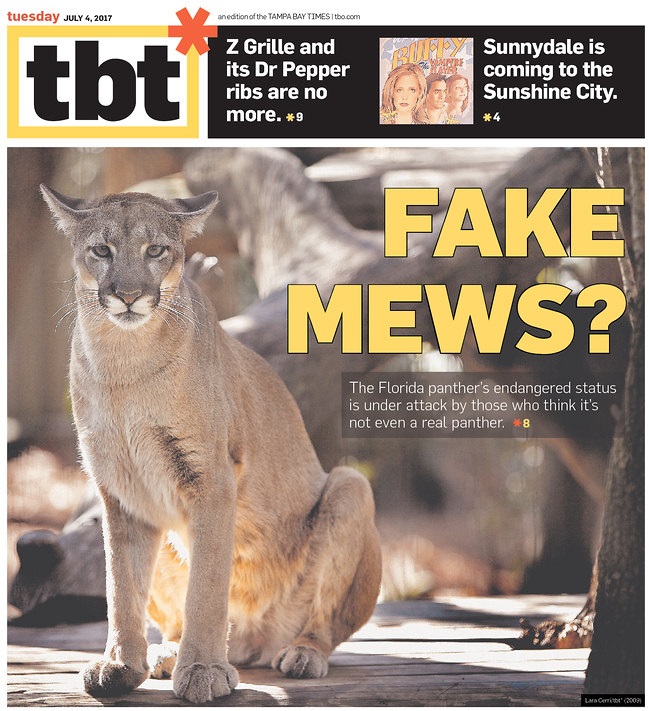 The front-page headline of TBT’s July 4 edition is clever for several different reasons. Firstly, some Floridians believe the panthers are no longer real panthers, due to being cross-bred in the mid-1990s with mountain lions brought in from Texas, to avoid extinction. Secondly, while some disagree with the findings, a 2000 scientific study claimed that all versions of the North American puma are one species and therefore, the Florida panther is not endangered.

Thirdly, the review of the Sunshine State animal’s status is being conducted under the watch of an administration whose leader regularly gets into cat fights with media outlets he deems to be “fake news.” From the TBT article:

“One of the most interesting things we’re going to review is the taxonomy,” Larry Williams, South Florida supervisor for the Fish and Wildlife Service, said Monday. Questions have been raised for years about whether the Florida panther is really a distinct sub-species of the pumas found out West, and thus deserving of legal protection. …

Williams refused to speculate on whether the five-year review could lead to a decision to change the panthers’ status similar to the decision his agency made about manatees. In March, the Fish and Wildlife Service announced it was downgrading manatees from endangered to merely threatened. The controversial move was opposed by most of the people who submitted comments in writing and in public hearings, as well as scientists invited to review it.

In this case, the public has until Aug. 29 to submit their panther thoughts to biologist David Shindle. TBT may have already concluded it’s a lost cause. The inside headline for the front-page article is “Run, Kitty.”