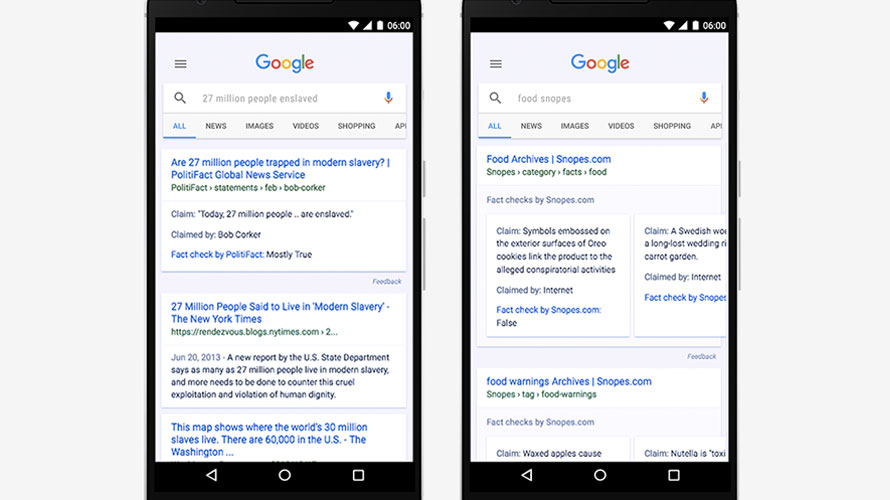 In October, Google introduced the fact check label for articles in Google news searches that fit its labeling recs. It was a small step in what would turn out to a protracted, multi-front battle–in advertising, education, social media–against fake news, one that still continues. This Friday, Google expanded its own fact-checking offerings by applying the label and more to Google searches, rather than merely Google news articles.

A Google search for a specific claim, for example, will not only turn up results for where that claim has been made, but a saved-you-a-click result about the claim’s authenticity, if one exists from fact-checking sites like FactCheck.org. In the example used in a blog post from Jigsaw product manager Justin Kosslyn and Google research scientist Cong Yu explaining the new move, the search term “27 million people enslaved” yields a PolitiFact article about the claim while also showing the claimant and result of the fact-check (mostly true, in this case).

Where there are differing results among fact-checkers, Kosslyn and Yu are relying on users to apply their own critical filter. “These fact checks are not Google’s and are presented so people can make more informed judgements,” they write. “Even though differing conclusions may be presented, we think it’s still helpful for people to understand the degree of consensus around a particular claim and have clear information on which sources agree.”

As with the application of the fact-check label for Google news searches, sites have to adhere to specific criteria to be included.

While the move is an extension of October’s Google news fact-check label debut, it is being introduced during a time in which platforms like Google and Facebook have been criticized for the ways in which their platforms have been gamed to spread misinformation. Back in December, Google had to make changes to its algorithm after it was discovered that holocaust denial sites were getting top billing in certain searches related to the Holocaust.