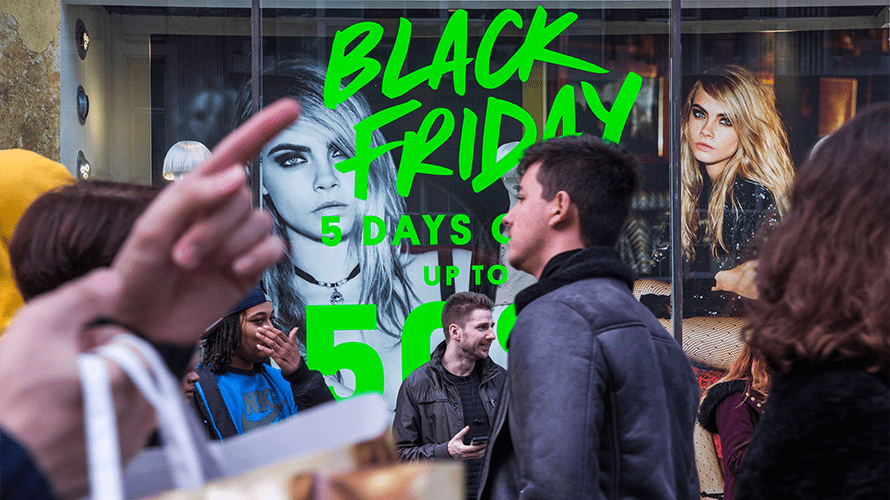 As consumers prepare to shop, here's a look at some stats about what they'll do. Getty Images

Annnd we’re off: The 2018 holiday shopping season is officially underway with online retailers generating nearly $10 billion in sales in the first two days of what is expected to be a particularly good year for retailers.

The most popular products for Black Friday shoppers this year included laptops and streaming devices, as well as the video games God of War and Let’s Go Pikachu and toys like L.O.L. Surprise, Fingerlings and Baby Alive, according to Adobe’s research.

That $6.2 billion is on top of the $3.7 billion that U.S. shoppers spent online on Thanksgiving. That’s higher than Adobe’s pre-holiday estimate of $3.4 billion and the $2.9 billion spent on Thanksgiving Day 2017.

Research from software company Salesforce shows consumers shopped online all week—with purchases hitting their peak after Thanksgiving dinner—as mobile use began increasing after 4 p.m.in each time zone and hit its high between 8 p.m. and 10 p.m. Which might be when the tryptophan kicked in?

“For the first time, online prices on Thanksgiving Day were as low as on Black Friday with consumers taking advantage of those deals in record numbers, making Thanksgiving Day the fastest-growing online shopping day, with 28 percent growth [year over year],” a rep said in an email.

While it did not provide figures for spend, Salesforce said digital revenue on Thanksgiving was up 18 percent year-over-year—and shoppers placed 54 percent of orders on their phones, which surpassed desktop for the first time. Mobile searches surpassed desktop searches in 2015, so it has apparently taken consumers more than three years to get comfortable with transacting on their phones, too.

Yet transacting, they are: Adobe found Black Friday 2018 was the first day ever to net more than $2.1 billion in sales on smartphones. Over one-third of online Black Friday sales were made on smartphones, which was up from 29.1 percent on Black Friday last year. Adobe also found consumers are getting more comfortable buying more—and buying bigger-ticket items—online as the average order value set a new Black Friday record at $146.

What’s more, Adobe found click-and-collect orders were up 73 percent from Thursday to Friday.

In addition, Salesforce found retail traffic from social grew by 41 percent, highlighting its potential as a channel for product discovery. And it found the most talked-about brands were electronics companies Vizio and Nintendo, as well as Starbucks (perhaps because early morning bargain hunters need pick-me-ups).

And—maybe one surprise here—the most talked-about retailers were Walmart, Amazon and eBay, according to Salesforce.

For its part, the National Retail Federation (NRF) expects overall holiday retail sales—defined as online and in-store sales in November and December—to increase between 4.3 percent and 4.8 percent this holiday season, generating $717.5 billion to $720.9 billion overall. That’s up from $687.8 billion in 2017, according to the NRF’s figures.

In a statement, NRF president and CEO Matthew Shay attributed growth to a healthy economy and strong consumer confidence.

“While there is concern about the impacts of an escalating trade war, we are optimistic that the pace of economic activity will continue to increase through the end of the year,” he added.

Of that $700-something billion, Adobe estimates consumers will spend $124 billion online.

Get read for record-setting Cyber Monday

The NRF projects 164 million U.S. consumers will shop between Thanksgiving and Cyber Monday. It predicted Black Friday would be the most popular day with an estimated 116 million shoppers, followed by Cyber Monday (75 million) and Small Business Saturday (67 million). Just 34 million planned to shop on Thanksgiving.

The NRF will release final figures for spend on November 27.

Adobe also predicts Cyber Monday will be the granddaddy of them all, generating $7.8 billion in sales, which would mean it will take the crown as the biggest online shopping day ever.