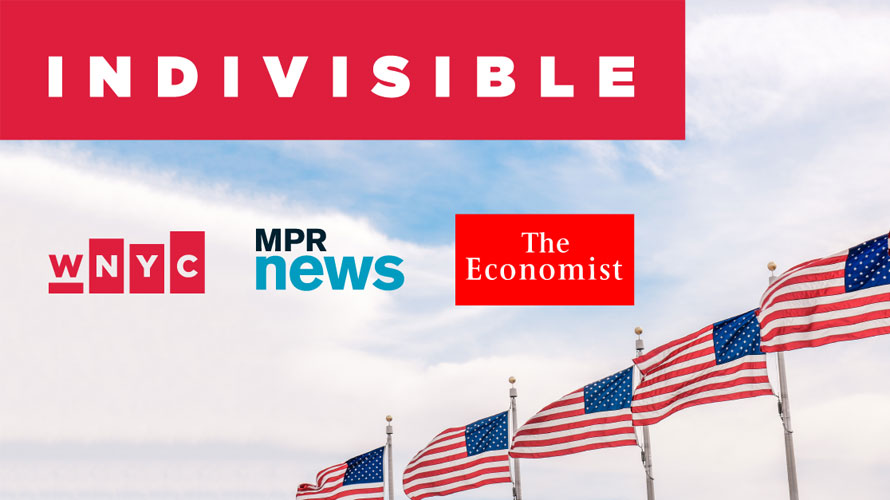 We are deep into the specials, assessments, report cards on the Trump presidency during this first 100 days, that arbitrary but aesthetically appealing number against which an early administration is judged.

But WNYC, MPR and The Economist have been engaged in their own 100 days project, one that began on Jan. 23 and has continued throughout these first months of the new administration. That project is Indivisible, a Monday-Thursday evening call-in show that started at the beginning of President Trump’s term and ends tonight. And while the discussions that have happened each night were about, or at least inspired by, the presidency in its first 100 days, the show wasn’t about that, not really.

What Indivisible has been truly concerned with is people: the people who have called in to answer questions like, “Can protests make a difference?” and “Should healthcare be a right or a choice?” and “Is the American dream still alive?” It has been about their answers, and about the people who might not have ever called but who were listening to those answers on a broadcast that reached 164 public radio stations in 31 states and the District of Columbia.

“That is very much what we all imagined, that in many ways the callers are the stars,” WNYC president and CEO Laura Walker told Fishbowl when we spoke to her, as well as a number of the show’s hosts, as the project was finishing out its first month of episodes.

The hosts had been putting questions of American identity and politics out there, with a different host or set of hosts taking on a different set of exploratory concerns on each of those days. Mondays belonged to WNYC’s Kai Wright, along with The Economist’s John Prideaux and Anne McElvoy, taking on the idea of how the current American political and cultural moment was playing out across the world. Tuesdays belonged to WNYC’s Brian Lehrer, who looked at what had and hadn’t become the new normal for different groups of Americans. On Wednesdays, Charlie Sykes, the former longtime host of a conservative talk show on WTMJ, tackled current events across the ideological span. Minnesota Public Radio’s Kerri Miller closed it out on Thursdays, as she will tonight, taking on the question of American identity.

We’re in a moment in which trust in the media has been shaken, and I think so many people are consuming self-reinforcing media, their echo chambers, that I think that it satisfies a need for a larger convening force that brings the country together.
Laura Walker

On a bare-bones structural level, the show seemed to follow the same formula adopted by so many media organizations attempting to diversify the regional and political representation of its audience, down to its hosts, who between them cover a comprehensive checklist of demographic categories. But if you have been listening, you know the call for red and blue, coast-to-coast opinions wasn’t a mere ploy to attract a larger audience.

“We’re in a moment in which trust in the media has been shaken, and I think so many people are consuming self-reinforcing media, their echo chambers, that I think that it satisfies a need for a larger convening force that brings the country together,” says Walker. The idea that Indivisible was about conversation, in the real sense of the term, rather than the drama of red vs. blue shouting matches to draw still-wounded, bloodthirsty audiences was hit upon by all the hosts we spoke to.

“I think shows like this are increasingly important because I think that the polarization is getting worse,” says Sykes, calling Indivisible “very countercultural in a sense that we try to create a space where people talk to one another, as opposed to the tendency where everybody is going off into narrower and narrower slices of the media.”

And the audience was there for it. The call-in lines during the shows, for one, have always been full, with Miller saying of her night that “people are getting on the phone lines before I’ve even really framed the show.” It was the same for the other hosts. WNYC producer Megan Ryan, in charge of the calls for every night but Miller’s, describes the data-mystery surrounding those who don’t make it to one of 10 open lines. “What I know is that those 10 lines are always full,” she says, “but I don’t know whether that means a thousand people are trying to get through or 11.”

Part of the appeal has been that the hosts weren’t matched to their natural audience segment, with each night representing an intentional spread of regional and ideological identities among the callers. “It is just so enlightening and insightful to hear voices of real people from different points of view and having different accents and different cadences from across the country talk with authenticity about what they’re feeling, without either being in an echo chamber of like-minded people or shouting at each other,” says Walker. “There’s a kind of a respect and there’s an authentic curiosity about what other people think.”

“As a national call-in we’re getting people from many, many different places, and with different kinds of stories to tell about themselves,” says Lehrer, something he says is an experience at once both universal and particular. “To some degree people are people, and to some degree people are defined by being from where they’re from–just ask anybody from Queens about not being from Brooklyn,“ he says.

I’ve been amazed at how many conservatives and Trump supporters listen to public radio.
Charlie Sykes

“I think this is something WNYC was conscious of and I’m grateful for that,” she says. “What I hope is that our partnership says to the audience, wherever they’re at, that we know that, and we think it’s really important that what you have to say in Indianapolis is as important as what they have to say in a borough of New York City.”

And for Sykes, the move from conservative talk radio to public radio challenged his own notions of who is a public radio listener. “I’ve been amazed at how many conservatives and Trump supporters listen to public radio,” he says. “It was kind of a revelation to me that their audience and our callers have been much more diverse than I think someone on the outside might feel.”

When Walker came up with the idea for the show, it was meant as an experiment, and as the weeks passed, the show adapted accordingly. After the first month of shows, a weekly wrap-up was created, a place to stitch all the week’s shows together in a combination of oral and textual summary. At the beginning of April, Indivisible announced a partnership with StoryCorps on an experiment, asking listeners to name someone with a different political perspective from them, and see if they’d be willing to engage in a recorded conversation about those differences.

An irreparably fractured, divided America is a convenient, engaging storyline. And while most Americans have probably been feeling that way, like ideological islands drifting further away from a no longer extant Pangea, broken up by political fault lines, perhaps media can do something other than endlessly reinforce that idea.

This has been both Indivisible’s aim and its takeaway. “I think of a Venn diagram, and people are going to be different on a lot of things, because that’s the nature of being a human,” says Lehrer, “but there are also going to be these areas of overlap, and we can also explore the areas of overlap in addition to the differences, and that maybe in this hyper-polarized moment in our country’s history, if we could get people into those overlapping parts of the Venn diagram a little bit more, then maybe we’ve accomplished something.”

Miller witnessed a lot of that hopefulness through her millennial callers, who “still care deeply about social change. This sounds hopeful. If I can get on the air and say, you are more than the box you checked on election day, I think that’s something that means something. You’re not as jaded, maybe, maybe not as cynical, I hope that. I think there’s something optimistic about the idea that it isn’t over.”