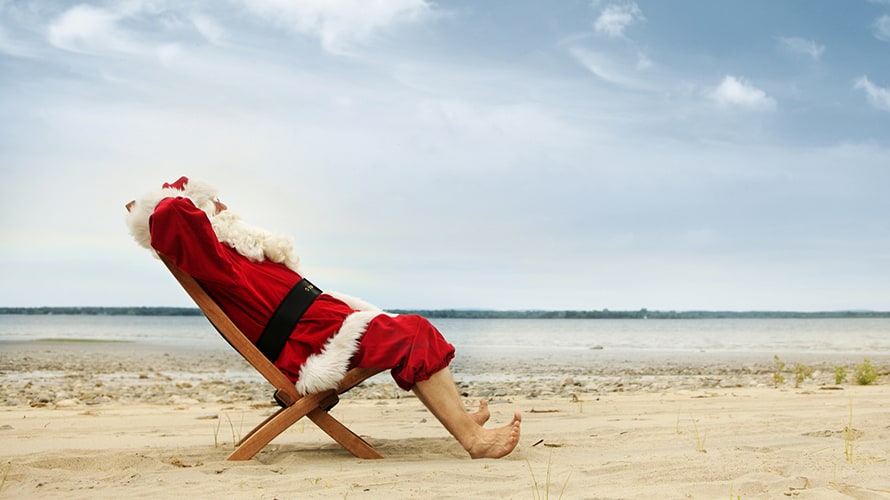 Once upon a time, retailers latched on to Christmas-themed summertime promotions. Getty Images

Believe it or not, Amazon did not invent the mid-July sale. Instead, in 2015, it branded its midyear sale as Prime Day and created its own retail holiday.

But summer is a notoriously slow period for retail, as consumers invest more in experiences like vacations than physical goods. And that’s why retailers have long used summer to get crafty with promotions like Christmas in July, said Ana Serafin Smith, senior director of media relations at the National Retail Federation (NRF).

The term “Christmas in July” may owe its provenance to Yellowstone National Park, which hosts a summertime Christmas celebration honoring the time in 1925 when a freak summer snowstorm reportedly stranded visitors and employees at the Old Faithful Inn.

Country Living, however, reports Christmas in July started at a camp for girls in North Carolina in 1933.

Christmas in July is also the title of a 1940 film about an aspiring copywriter, who submits a slogan for a fictional coffee company and is tricked into thinking he won a contest. Hijinks ensue.

So perhaps it was a fan of the movie, a camper or a tourist who ended up in marketing and suggested borrowing the theme to spice up an otherwise bland summer sale. It’s not clear when exactly retailers embraced the concept, but Smith said the mid-summer sale is a trend the NRF has seen for 30 to 40 years as big-box and department stores in particular try to get rid of their spring/summer inventory with deep discounts—as they also try to get consumers to start shopping for back-to-school season.

And it works. Sucharita Kodali, an analyst at Forrester, said Prime Day 2018 was about a $4 billion day for Amazon, which is probably a 300 percent lift over a typical day thanks in part to heavy promotion. Sales for other retailers aren’t as heavily promoted, so Kodali estimated other sales may generate 5 to 10 percent more than their baseline July sales overall.

And home improvement chain Home Depot says its Christmas in July event “can be the cool down you need to beat the heat” as it pushes inflatable yard decorations, wreaths, lights and trees “before the holiday rush begins later this year.”

JoDee George, head of accounts at business marketing agency Bader Rutter, said July is an ideal month for sales because consumers have recovered from holiday spending, but haven’t started saving for the next holiday—and weather and trips make them happier.

Indeed, in addition to Prime Day, a number of brands and retailers are billing their mid-summer sales as Black Friday in July. That includes Dell, Godiva, Macy’s and Wayfair this year.

Nordstrom, of course, has its anniversary sale in late July. And Walmart has a summer sale. Among others.

And, according to data from the NRF, these Black Friday in July sales are capturing consumer attention: 25 percent of back-to-school and college shoppers said they planned to use Prime Day to shop for online deals at other retailers and 31 percent said they’d be checking for in-store deals.

“Retailers need something more compelling than a July 4th sale, which is the only other message they’ve had in July and isn’t that exciting or effective any more. ‘Mid-summer sale’ is a little boring. Christmas or Black Friday in July screams, ‘deeply discounted offers, great deals!’” Kodali said. “You can see where this will go. Retailers will push it so aggressively that they’ll lengthen the time of the sale and the depth of the discounts because shoppers will get jaded in the future.”

The rebrand may also be because the association with a religious holiday limits consumer appeal. In fact, Smith said even in the actual holiday season, retailers try to stick to more neutral messaging because they have realized not all consumers celebrate Christmas.

“Over the last 10 years, we’ve seen retailers change their marketing plans to call out, ‘Here are our holiday sales’ versus it being just Christmas,” she said. “It’s more welcoming.”

But it may also be because Christmas in July is now strongly associated with the Hallmark Channel thanks to its Christmas Keepsake Week movie marathon, which includes 15 days of Christmas movies from Hallmark’s 200+ movie collection, with titles like A December Bride, Love You Like Christmas and A Very Merry Mix-Up.

Coincidentally, mid-July is when greeting card company Hallmark releases more than 200 of its 400+ 2018 Keepsake Ornament collection.

“It works really well for us,” he said. “It’s as much a play on our association with Keepsake and retail as it is a content play.”

This marks the sixth year Hallmark Channel has had its July movie marathon. These movies are repeats, but it will debut 34 new Christmas movies later this year. That’s right: 34.

“We tie it in as much as we can,” Abbott said. “[Consumers] look at ornaments and [then they’re] coming home and watching Christmas movies. It’s a good break in the heat.”

Data from Google Trends shows Hallmark is in two of the top five queries related to Christmas in July searches. And data from SEO platform Conductor confirms last year, more people were searching for Christmas in July as it pertains to Hallmark and movies than retail sales.

Per George, the problem with limited-time offers like Christmas in July is they have less impact each time.

“Consumers are savvy now more than ever as to how they work, so marketers must move more quickly to implement something catchier and more fun, but also be willing to accept that each offer will have shorter longevity than the last,” she said. “Therefore, Christmas in July, once a fun marketing gimmick that delivered limited time pricing, is no longer clever, it’s been spent. It’s at the end of its gimmick life cycle. Evidenced by the fact that it’s made its way to the Hallmark Channel.”