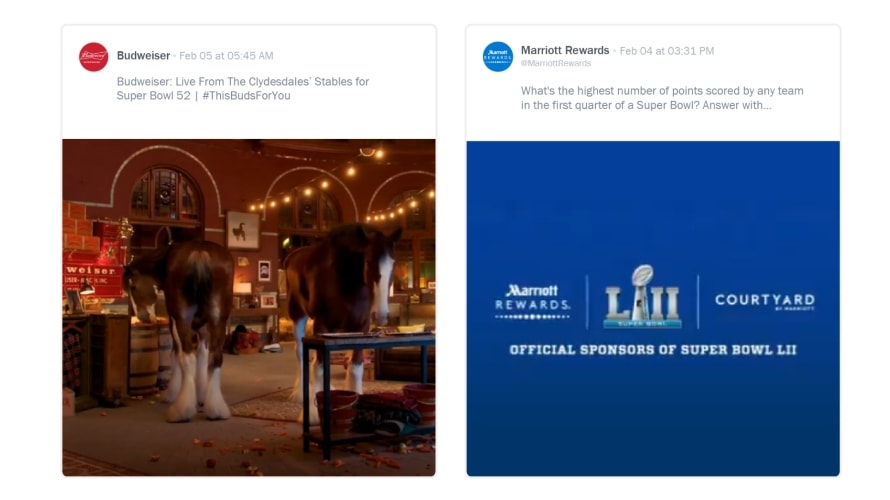 Following the pattern that emerged during the holiday season, brands have been turning their attention toward Instagram and away from parent company Facebook when crafting their social strategies for the Super Bowl, according to social marketing firm Unmetric.

Unmetric CEO Lux Narayan said, “While Facebook remains the most preferred social network for posting, its popularity has been declining since 2015 as brands shift toward Instagram, as consumers interact more on this social platform than any other. This past year, posts on Instagram had two times more interactions than Facebook and 11 times more than Twitter.”

Unmetric analyzed Super Bowl-related activity by U.S. brands on Facebook, Twitter and Instagram from 2012 through 2018, and it found that brands begin posting about the Big Game as early as September, largely with a focus on giveaways.

The majority of posts, however, occur from mid-January through early February.

Narayan added, “The hospitality industry dominated the digital conversation around the Super Bowl, publishing 869 posts on Facebook alone. Marriott Rewards had one of the most engaging posts, through offering giveaways to fans. However, food and beverage and retail trailed closely behind, with many other industries also gaining a spot in the top 100 most engaging posts, from automobile to ecommerce.”

In its examination of the 100 most engaging Super Bowl posts by brands in 2018, Unmetric found that Instagram posts with images tallied four times more interactions than Facebook posts and 79 times more than tweets.