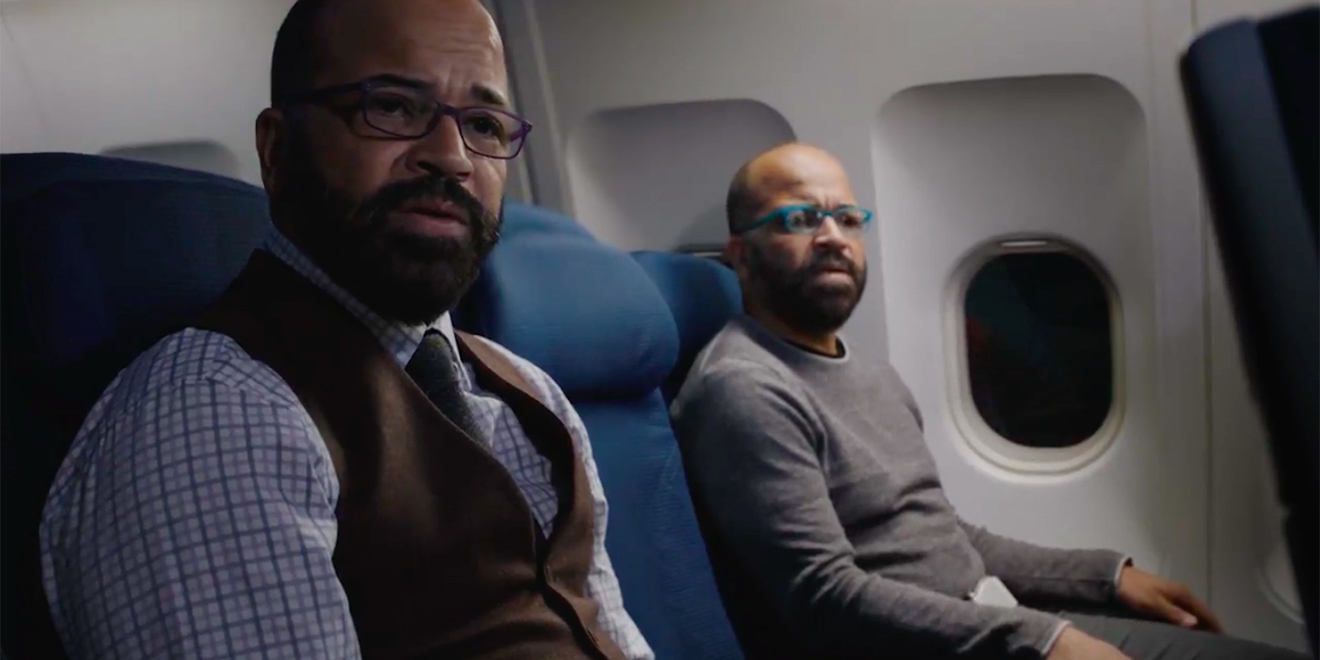 It’s a scary world, and things might seem particularly bumpy right now. But that doesn’t mean you have to panic … at least, not all the time.

A new ad from The Atlantic and HBO is promoting a thoughtful approach to current events, featuring Westworld star Jeffrey Wright—several versions of him, in fact, all arguing with one another.

Set in an airplane, the new 3-minute clip opens on the first, casually dressed Wright wondering if he should be worried about the amount of turbulence. Immediately, a cool and condescending version of himself a couple seats away tells him to calm down and marvel at humanity’s progress. When a third, anxiety-ridden version across the aisle pipes up, convinced of impending doom, the second—an armchair professor—holds steady. “Jeffrey, stop riling up Jeffrey.”

So the gag goes. There’s an asshole Jeffrey in first class, who only leans into the aisle for a moment to peer back through the door and shush all the Jeffreys in cattle class. There’s a flight attendant Jeffrey, fastidious about the rules to the point of tunnel vision. None is quite right—and only the original, presumably a stand-in for Wright’s truest self—remains the most poignantly critical thinker.

An expansion of the The Atlantic’s “Question Your Answers” series, the ad—titled “Should I Be Scared”—marks the addition of HBO as a co-sponsor. The first video under the tagline, created with Wieden + Kennedy New York, launched in early 2017. That one, titled “Typecast,” featured Michael K. Williams—best known for his roles on the premium channel’s The Wire and Boardwalk Empire—in a similar conceit, as he sat in a living room debating the reality of being a black man in Hollywood—and America—with himself.

“HBO and The Atlantic are two brands that share a commitment to helping people understand the human condition and the world around them,” says Chris Spadaccini, evp of consumer marketing at the cable network. “When we first saw “Typecast” were struck by how relevant the message was to HBO’s brand identity and core values. We thought there was a lot of rich territory to explore with other talent, while maintaining the same creative format, so we approached The Atlantic about expanding their campaign to a pro-social partnership between our two like-minded brands.”

The Atlantic quickly embraced the idea.”After one meeting, we all agreed we should pursue the idea as a shared platform,” says Sam Rosen, head of growth at the publisher. “We share a sensibility—a commitment to quality, a desire to provoke thought—and the marriage of The Atlantic’s journalistic approach with HBO’s entertainment values just made sense to us.”

As with the Williams clip, the multiple-Wrights dynamic is a delight to watch, leveraging movie magic to play out a complex inner monologue—easy to believe and relatable. The airplane metaphor adds new dimension—an updated version of the ship of state—that hypes the political overtones without explicitly stating them, while also allowing the perfect setting for neurotic Jeffrey to rattle off a laundry list of terrible things that are really happening on the ground—or easily could.

At the same time, that broader, 30,000-foot view means it’s perhaps not as chill-inducing as “Typecast,” where the more personal, identity-crisis approach—using Williams’ life and career as a lens for examining systemic racial issues—combined with his stunning performances to make for a viewing experience that, while amusing, was also heart-rending—a sweeping and tactile snapshot of a cultural debate that’s tantamount to catching lightning-in-a-bottle—both hard to recreate, and still well worth watching again more than a year later.