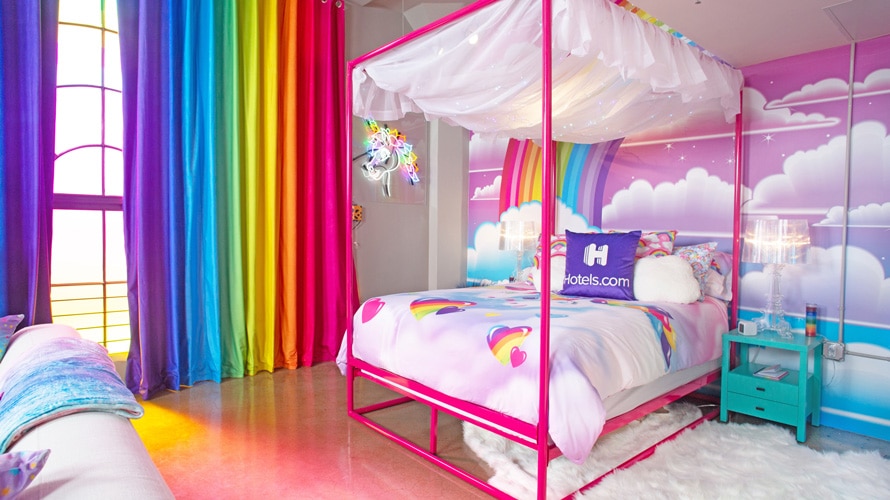 The Lisa Frank aesthetic—dolphins, unicorns and lots of hearts and rainbows—is coming to a Los Angeles penthouse apartment available to rent from booking site Hotels.com and hospitality firm Barsala.

Reservations for the Lisa Frank Flat will open Oct. 11—the annual Day of the Girl, incidentally—on Hotels.com. Stays are available from Oct. 11-27 for $199 per night, which is the standard price of a stay in that room, a Hotels.com spokesperson said. 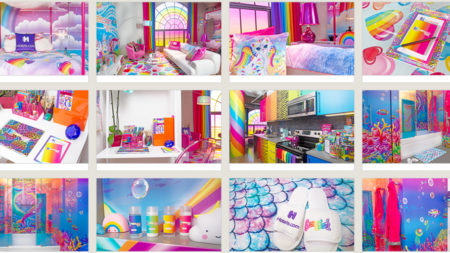 According to a press release, every detail is “thoughtfully curated to give guests a behind-the-scenes experience into Lisa Frank’s colorful world” and promises they will feel “like [they’ve] been transported directly into a scene on one of Lisa Frank’s notebooks from [their] childhood.”

More specifically, according to the Hotels.com rep, this ‘90s kids’ dream room includes:

“[It’s] also worth noting that Lisa was directly involved in bringing her vision world alive within the space,” the rep added. “Every wall and corner is decorated and inspired by Lisa’s original prints and characters.” Expect reservations to sell out “faster than you can say ‘as if.’”

The news comes after the four decade-old brand has faded from the spotlight, but seems to be staging a comeback—or trying to, anyway.

In 2005, the Tucson Citizen reported that Lisa Frank—the person, who was founder and chairman of Lisa Frank the company—was looking to oust her soon-to-be ex-husband, James Green, as president and CEO. At the time, Lisa Frank Inc. had reportedly pulled in more than $1 billion in retail sales since 1990.

A story in Jezebel, however, said the company was down to six employees and zero retail stores by 2013—and its products were nearly impossible to find elsewhere—after turmoil following its namesake’s divorce, including at least nine lawsuits between Frank, Green and/or vice president Rhonda Rowlette and her husband from 2005 to 2009.

Indeed, a listing for the Lisa Frank Factory in Tucson from online travel guide Atlas Obscura said it once offered tours, but is now abandoned. The travel site cautioned visitors to “stay on the correct side of the fence and don’t trespass.”

“Sales declined as the original fans grew up … by 2015, the factory that once employed 500 people had dwindled down to a handful of employees,” according to Atlas Obscura. “Now, the unloved building stands largely forgotten, and has been on and off the market for years.”

A brochure on commercial real estate marketplace Loopnet offers the 300,000-square-foot industrial building for $17 million, but the listing appears to be inactive. And Lisa Frank won’t likely be able to count on Amazon as a potential buyer—the ecommerce giant recently opened an 855,000-square-foot warehouse eight miles away.

The Lisa Frank rep said the brand has “lots of exciting things happening in the next year, but nothing we are officially announcing yet,” and declined to comment on whether it is angling for a comeback.

However, the brand’s partnerships in recent years indicate it may be in the cards. The brand inked a deal with Target to sell pajamas and has an assortment of “collectables from the ’80s and ’90s” in stock at Urban Outfitters—including an All-In-One Stationery Pack and Sticker Pack, as well as unicorn and lips muscle tees. Even Lisa Frank debit cards are a thing now, too, with 31 options.

According to Tim Barlow, senior principal analyst at research firm Gartner, harkening back to late ‘80s and early ‘90s is a well brands can keep going back to in part because of older millennials between ages 35 and 42.

“The important thing to remember is the time they came of age—they were growing up in a fairly idyllic and stable time,” Barlow said. “The Cold War had subsided, there was relatively stable and significant long-term economic growth, and even the problems of that time that ate up the news cycle—O.J. [Simpson] or Monica Lewinsky—you look back on the amount of time we spent as a nation talking about them and it seems so quaint [compared] to what we’re dealing with today.”

Millennials had big dreams—but they haven’t necessarily realized them in adulthood, which was marred by 9/11 and the Great Recession, he said.

“The challenge of millennials’ lives today make it so this past, they view [it] with rose-colored glasses,” Barlow added.

And that is why the past remains such a desirable place to visit temporarily—and why this Lisa Frank hotel room is so appealing.

“You’re literally visiting,” Barlow said. “They’re not asking you to move in and … recast your current reality into a falsified fever dream. But there’s this opportunity you have to go back and temporarily relive [your childhood].”

But will this translate into a brand revival? That depends in part on how younger generations respond.

Barlow cited a product like Nintendo Labo, which combines the throwback element of cardboard construction with the current technology of virtual reality, as a good example of something parents and kids can do together that also appeals to today’s children in a legitimate way.

“Simply repackaging the past for a new audience may have some initial appeal, but if it doesn’t resonate, it won’t have sustaining longevity,” Barlow added.