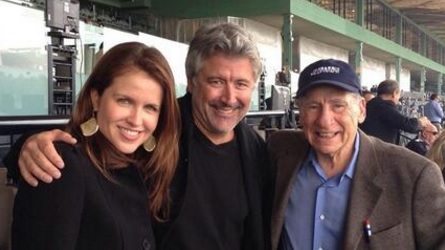 There’s still the odd bit of coverage of Santa Anita Park in the Los Angeles Times, like this fun April 15 piece about a horse named Pee Wee Reese winning a race in Arcadia, Calif. on MLB’s Jackie Robinson Day. But the days of the paper printing daily Santa Anita entry information and the previous day’s racing results are once again gone.

To the @latimes - shame on you for eliminating daily coverage of horse racing (the sport of kings!) from your newspaper.

The paper last month stopped publishing, in the print editions, horse racing entries and results. On the plus side, deputy sports editor John Cherwa was recently assigned to help cover horse racing.

Mel Brooks’ post-Easter weekend tweet, which is getting a fair bit of traction, gives us an excuse to revisit a trifecta of old related bits. First off, if you never read the paper’s coverage last year of new track announcer Michael Wrona, it was memorable. Especially this summer 2016 article about a strange and sad local twist.

Secondly, when L.A. Times reporter Scott Hettrick wrote in 2007 about being laid off on a day dubbed “Black Monday,” he confessed that he never thought he’d see a time when the paper decided to exit the horse-racing blanket-reporting game. He noted that many print subscribers at that time were angry enough to cancel their subscriptions, and also revealed an interesting back-and-forth about Santa Anita Park with then-owner Sam Zell, prior to that brutal July day:

When I first took over the horse racing beat, I continually heard complaints from readers about the abbreviated race charts in the Times. I was told Santa Anita Park was willing to buy an ad to help pay for the space to run full charts. …

I emailed Zell to let him know about Santa Anita’s willingness to help defray the cost of running full horse-racing charts. He emailed back, saying essentially, “Let’s get this done, and if it doesn’t get done, I want to know why.”

But there are basic journalistic rules about selling ads to news sources. … The return of a handicap and some form of charts might bring back a few of those readers. But the Times has to be careful. Selling the space to Santa Anita may come with a high price, and that price is the Times’credibility.

As you might guess, nothing ultimately came out of this.

P.S. A rep for the L.A. Times relays to Fishbowl: “For what it’s worth, our Sports editor Angel Rodriguez would welcome a column penned by Mel Brooks. He is clearly passionate about horse racing.” How about it, Mr. Brooks?

Update (April 22):
Brooks followed up on Twitter with this. Be sure to read the replies!

So happy for all the potent feelings I've stirred up among all the ardent horse racing fans with my rebuke of the @latimes - let's march!

Previously on Fishbowl:
Mel Brooks Is a Big Fan of Al Jazeera America
A Celebrity Santa Anita Trifecta That Can Always Be Counted On for Laughs