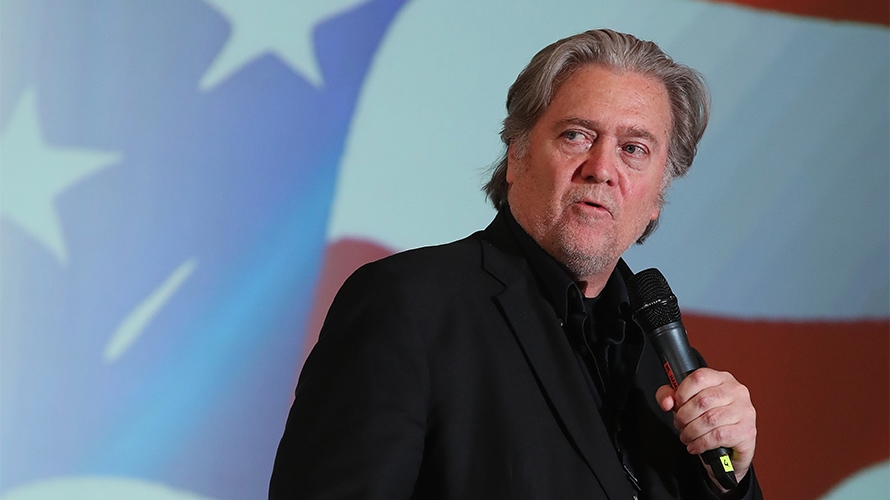 Bannon will not be headlining the festival after all. Getty Images

Steve Bannon, the former chief strategist for President Donald Trump, will no longer appear as a headlining guest at the New Yorker Festival, the magazine announced Monday night several hours after announcing Bannon’s inclusion in the festival.

The rapid reversal in the festival lineup came after public outcry and after a number of high-profile guests, including comedian John Mulaney and filmmaker Judd Apatow, announced they would no longer appear at the festival because of Bannon’s inclusion.

In a lengthy statement released Monday night, New Yorker editor in chief David Remnick, who was slated to interview Bannon onstage at the October event, said he would pursue interviewing Bannon in a more “traditional” journalistic setting, and not on an onstage interview for which Bannon would be compensated.

“I’ve thought this through and talked to colleagues—and I’ve reconsidered,” Remnick said in the statement. “I’ve changed my mind. There is a better way to do this.”

Hours prior to the reversal, Remnick, a frequent critic of the current administration and its policies, told the New York Times in an interview that he planned on “asking [Bannon] difficult questions and engaging in a serious and even combative conversation.”

Much of the backlash centered on the viewpoints of Bannon, a frequent supporter of far-right politicians. Bannon, who left the White House in August 2017, formerly served as the executive chairman of the right-wing website Breitbart, which he has described as a “platform for the alt-right.” While Bannon describes himself as a conservative, his stated opinions have been described by his detractors as white nationalist.

A number of major names scheduled to attend the festival announced they would no longer attend if Bannon were there and cited Bannon’s rhetoric.

“If Steve Bannon is at the New Yorker festival I am out,” Apatow tweeted Monday. “I will not take part in an event that normalizes hate.”

“I’m out,” Mulaney tweeted shortly after Apatow did. “I genuinely support public intellectual debate, and have paid to see people speak with whom I strongly disagree. But this isn’t James Baldwin vs William F Buckley. This is PT Barnum level horseshit.”

Comedians Jim Carrey, Patton Oswalt and Jimmy Fallon were among the other big names who said they wouldn’t attend if Bannon were included in the guest lineup. Musician Jack Antonoff, of the band Bleachers, also said he’d also sit out the event.

“Respectfully that’s a full no for me and normalization of white supremacy,” he tweeted.

The New Yorker had been working to arrange Bannon’s appearance at the festival for months, the New York Times reported Monday night. In a statement to the Times about the cancellation, Bannon said that that Remnick “showed he was gutless when confronted by the howling online mob.”