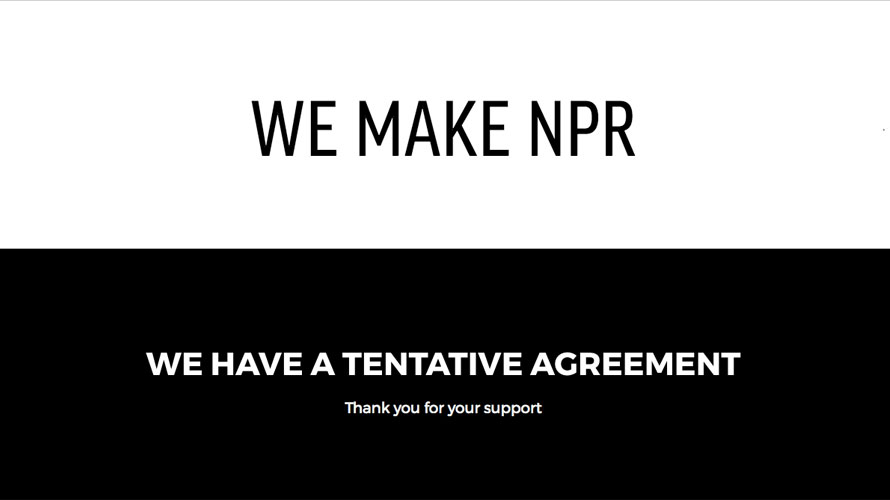 A tentative agreement has been reached between NPR and SAG-AFTRA, the union that represents NPR employees, on renewing a contract that was set to expire over the weekend.

The agreement, reached at 12:08 a.m. on Sunday, comes after a period of negotiations that NPR union members brought attention to with a website and campaign, #WeMakeNPR, to highlight the value union members bring to the organization. The deal avoids a potential strike that could have been called, pending SAG-AFTRA approval, had negotiations stalled.

According to a statement from SAG-AFTRA, “The deal provides for salary increases and effectively repelled efforts to erode union protections and institute a two-tiered salary system.” The system referenced in the statement would have allowed NPR to pay new employees lower rates than current employees for similar roles, and was a major sticking point in negotiations.

“Both sides have been working over several months to reach this new, forward-looking agreement that meets the needs of NPR’s employees and operations,” read a statement from NPR. “SAG-AFTRA members will have an opportunity to vote to ratify the agreement in the coming weeks. Both NPR and SAG-AFTRA look forward to working together in support of NPR’s mission and service to the American public.”

During the negotiation process, the #WeMakeNPR campaign inspired acts of support, both on and off social media. On Friday, the staff of podcasting company Gimlet Media sent a signed letter of support to NPR union members. “We still want very badly to beat you on the podcast charts. But it’s NPR’s ability to attract and maintain top talent that make you a worthy adversary,” read the letter. “A strong and fair NPR is good for its employees, it’s good for the greater audio industry, and it’s especially good for the listeners.”