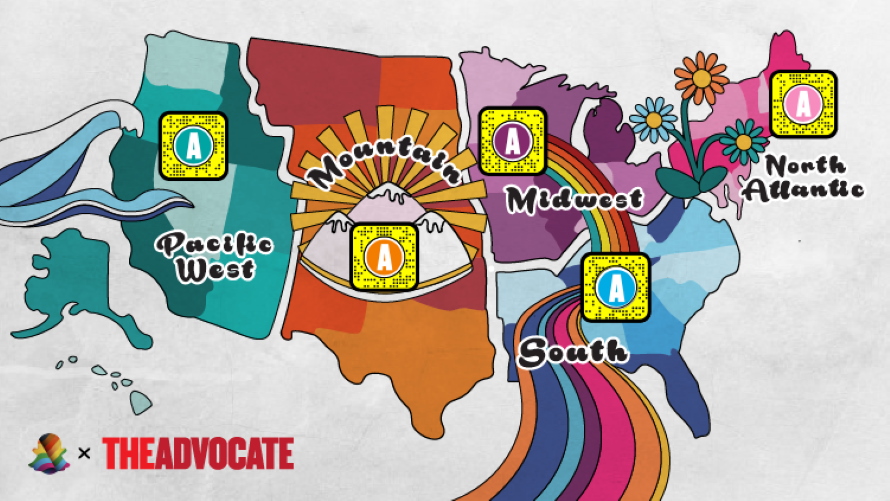 Snap tapped five Official Lens Creators for the project, each representing a different region of the U.S. Snap Inc./Pride Media

Pride Media, publisher of LGBTQ+ outlets The Advocate and Out, teamed up with several Snap Inc. Official Lens Creators on a series of five augmented reality lenses highlighting diverse, queer-identifying changemakers who have been advancing equity for all people in every U.S. state.

The virtual, immersive AR Portal lenses will roll out Wednesday concurrently with The Advocate’s annual Champions of Pride issue, which features the work of activists, artists, elected officials and everyday people representing a full spectrum of LGBTQ+ and BIPOC communities who are affecting real change.

Snapchatters will be able to explore art gallery-style spaces though the lenses, learning about people like “Mighty” Rebekah, a 13 -year-old who successfully lobbied her home state of New Jersey to greenlight an LGBTQ-inclusive curriculum, and Brandon Wolf, one of the LGBTQ community’s leading gun rights activists and the first survivor of the Pulse nightclub shooting in Orlando, Fla., to testify before Congress.

Snap tapped five Official Lens Creators for the project, each representing a different region of the U.S., with ties to that region. All five identify as LGBTQ+ or as an ally.

Brielle Garcia, representing the Pacific West, said in a statement, “I wanted to work on a Pride lens that was not just a celebration of the past, but a celebration of our future. I hope these lenses can be an encouragement to everyone in the LGBT community—encouragement that people as unique as you can have success in business, politics, art or anything you can dream of. This message is important to me because this kind of success has not always been available to us. So many amazing people have come before us to pave the way, and this is a celebration of their success and a guide to what you can achieve.”

Alie Jackson, representing the Mountain region, added, “As an ally of the LGBTQ+ community, I think it’s very important to support the ongoing effort to create equality and end oppression for LGBTQ+ people. I want to help teach people that fairness and justice should be equal for everyone regardless of their sexual orientation. The message behind my lens is to showcase incredible LGBTQ+ champions in my region in an inspiring, artistic way. I wanted to help by using the platform that I am privileged to have to uplift their voices and create a (digital) space to celebrate marginalized identities.”

Joshua Keeney, the Northeast creator, said, “For this lens, the concept was to transport the user to the North Atlantic to celebrate the LGBTQ champions of the region. I had this vision of this industrial-esque New York apartment to serve as a photo gallery for the LGBTQ champions. This lens really celebrates the diversity within the LGBTQ community and helps to bring attention to the accomplishments of figures within the community and within the North Atlantic region. The takeaways that I want people to have with this lens is that there is incredible diversity within the LGBTQ community, and that everyone can be a champion in their own way and can bring changes to their own communities.”

And Cyrene Quiamco, representing the South, added, “The world could use more love, now more than ever. I love how this project highlights the incredible accomplishments of people in the LGBTQ community. It shows that this community is something to be celebrated and be proud of. My lens shows 22 Champions of Pride in the South and spotlights their accomplishments in advancing and advocating equality in the community. By showing this, I want the viewers who are LGBTQ, or know someone who is, to be proud of the community. On the front camera, a crown appears on the user’s head that says, ‘Champion of Pride.’ By wearing this AR accessory and learning about the Champions, I hope the viewers can aspire and/or support to be a Champion of Pride and spark change and equality.”