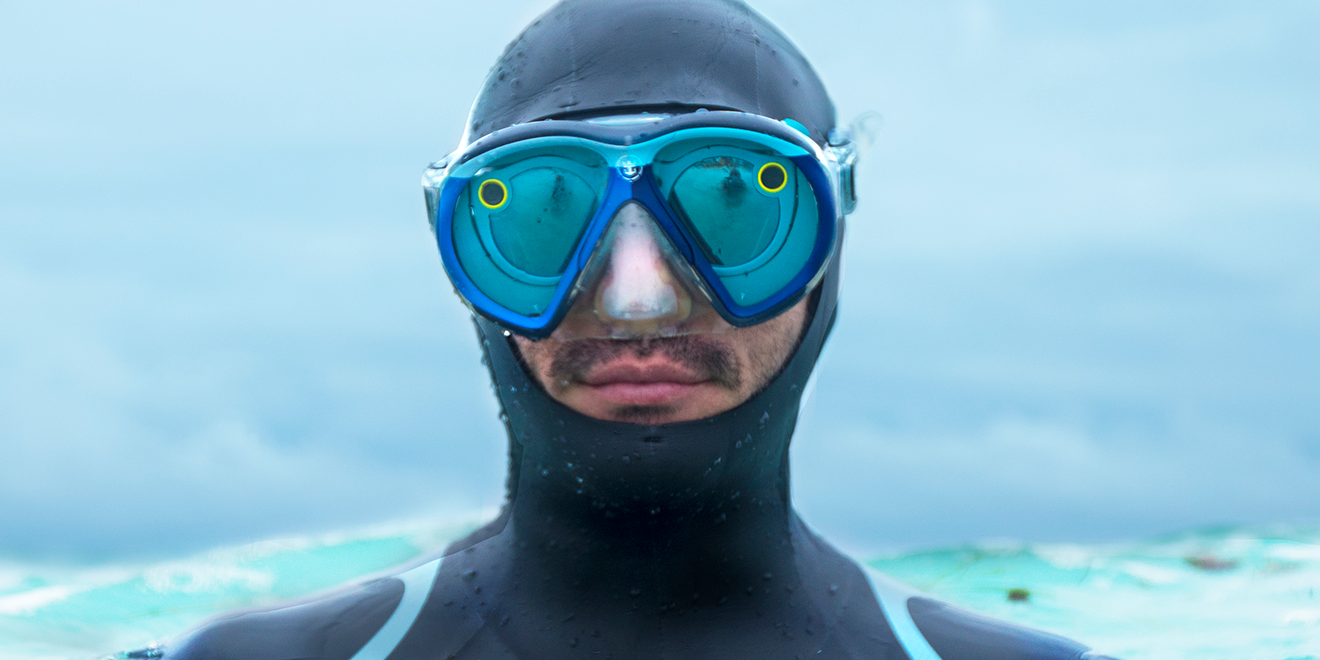 With the exception of professional deep-sea divers and filmmakers, underwater scenery has largely remained unexplored territory on social media. But that could change with an unusual invention from Royal Caribbean, which plans to strap waterproof cameras on cruisegoers’ faces to help them get enviable vacation pics.

This week, the company is debuting a scuba mask with built-in Snapchat Spectacles, which could soon enable everyday divers to swim and shoot videos and photos of marine wildlife in places like Belize and Mexico. The “SeaSeekers” goggles were built by Sexton, an Oregon-based firm that specializes in custom underwater housing. (The concept was developed by Boston ad agency MullenLowe.)

To promote its #SeekDeeper campaign, Royal Caribbean equipped three well-known divers with their own SeaSeekers, which they wore while exploring water that tours often visit. The company dispatched marine wildlife photographer and conservationist Roberto Ochoa to Cozumel, Mexico, to provide a new look into the migration of whale sharks. It sent marine biologist Gabriela Nava to examine a coral reef restoration project. And in Belize, free diver Ashleigh Baird wore a pair while visiting the Great Blue Hole, one of the largest underwater sinkholes of its kind.

According to Royal Caribbean chief marketing officer Jim Berra, the goal is to receive a patent for the product and then equip ships with the goggles so guests can rent them by this fall. He said one purpose of the campaign is to remind people of the biological diversity of the Caribbean.

“You can get off the beaten path and have these types of water-based adventures and then capture it in a really fun and unique way,” Berra said.

Royal Caribbean only made 10 prototypes of the product, but it gave Adweek an early preview. And while doing a demo in the Caribbean would have been ideal, the next best thing was a luxury hotel pool a little closer to home in New York.

During an early-morning swim on Thursday at the Marmara Park Avenue Hotel, I got a chance to try the SeaSeekers. To the untrained eye, it might look like a colorful scuba mask. However, to anyone who’s seen a pair of Spectacles in action, there’s no mistaking the yellow-ringed circular cameras on the polarized lenses, fastened safely behind the waterproof plastic. (This week Snap Inc. won three Cannes Lions for designing Spectacles, which one judged described as both “functional” and “beautiful.”)

While I’m a proficient swimmer, I’m far less proficient as a scuba diver, so the goggles felt foreign at first. And while the overall design was fairly comfortable, the nose had no padding (a minor inconvenience but one that proved a little painful over time). There was just one other problem: The suction around the eyes and nose was not 100 percent waterproof, which made it tough to stay underwater for too long without getting water in my eyes and nose. However, that in no way seemed to affect the function of the glasses themselves, which worked underwater perfectly.

Compared with the Caribbean there’s not a lot to document in terms of wildlife in a Manhattan pool. But I brought a friend along, who helped keep things interesting while we documented an improvised form of spontaneous synchronized swimming—underwater handstands and torpedoing through the blue like whatever fish might be floating off the coast of Belize. And the Specs worked each and every time, syncing to my water hazard of an iPhone 6 sitting safely on the side.

Viewing the underwater snaps afterward felt more immersive than a lot of other content, and it makes a lot of sense why a cruise line would want to have a way to show people on land what they’re missing. And, to be honest, the SeaSeekers were actually pretty fun to use—they even made me wish I could actually go out in the deep blue sea. (All that organic content cruisegoers will generate onboard could make for good social marketing just in time for the winter travel months.)