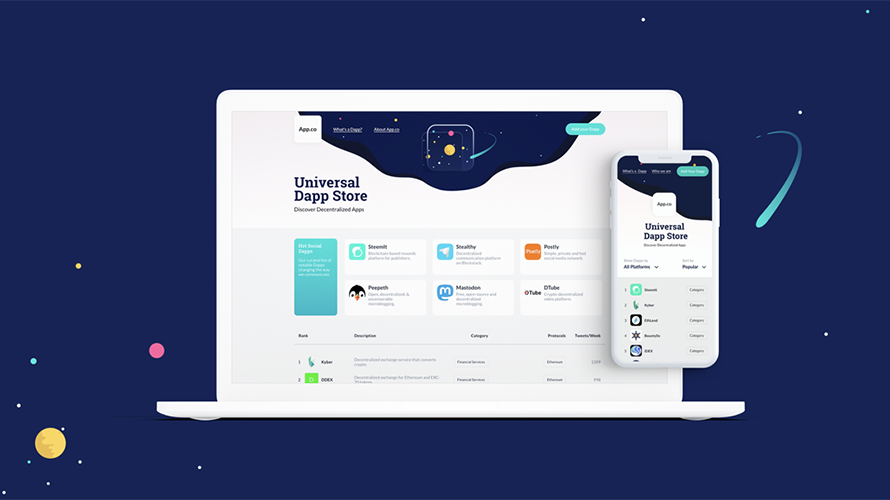 Blockstack has a new store for decentralized apps. App.co

It’s a big week for the internet. Decentralized app protocol Blockstack has unveiled an app store for decentralized apps that, naturally, are called dapps, making this arguably the world’s first Dapp Store.

Blockstack said in a statement that these customer-developer networks are more transparent, equitable and resilient than traditional apps, with all parties incentivized to treat each other well as they innovate. (Blockstack did not respond to a request for comment.)

“If you use traditional apps, your digital rights, privacy and choices are severely limited,” Blockstack said in an explainer on App.co, the Dapp Store website. “These app ecosystems serve to enrich a small number of powerful corporations by centralizing user identities and data storage.”

But dapps are also an avenue into the decentralized internet, which similarly uses peer-to-peer communication to enable users to store and exchange information without an intermediary. And it could be the basis for a new kind of internet if consumers embrace it, despite its existing technical challenges.

For its part, Blockstack hopes its Dapp Store will create a more streamlined process for discovery and drive everyday users to dapps.

“We strongly believe that projects across the decentralized community need to join together and familiarize users with this new online experience,” Blockstack wrote in a blog post published on Wednesday. “Consumer education across the board will lift up every project and dapp, showcasing what internet freedom and user choice can truly look like. Together, we can show users that there are better alternatives to a small number of powerful corporations that exist to benefit from their data.”

The creation of the Dapp Store is also arguably a sign the decentralized ecosystem is graduating from the infrastructure phase to the utility phase.

Blockstack is one way to build dapps, but said all protocols are welcome on App.co as it is committed to “celebrating an open, decentralized internet for all.” (No word on why it isn’t called Dapp.co.)

Blockstack is curating the Dapp Store initially but said it plans to eventually include user ratings to rank dapps.

Blockstack backer Union Square Ventures recently updated its thesis to focus less on the application layer of the web, which includes consumer-focused businesses where it said the value of the service to a user increases as others also use it, and includes examples like Twitter, Etsy and Tumblr.

“But the success of businesses that benefited from network effects dominated consumer internet to a point where it became extremely difficult for new networks to emerge, which remains true today,” the firm said in a blog post.

As a result, Union Square Ventures updated its thesis to focus in part on “the enablers of open and decentralized data, which have the potential to counteract the centralizing force of the large internet networks.”

A rep for Union Square Ventures did not respond to a request for comment.