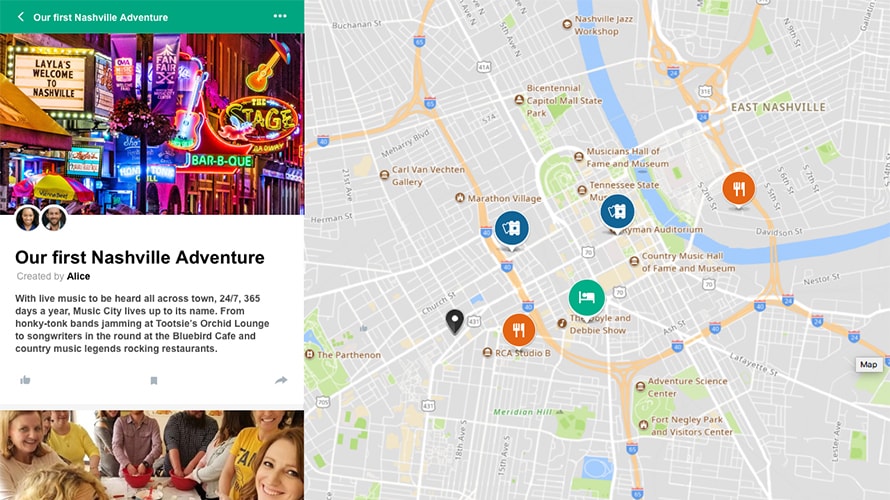 Later this year, TripAdvisor will release a new version of its platform that includes a social media component. TripAdvisor

These days, there’s a social media app for everything. So of course TripAdvisor is making one for travel.

On Monday, the company unveiled its plans for a redesigned website and mobile app that puts people and places front and center. The debut of Travel Feed, which will roll out later this year, moves away from using the platform for completing tasks such as finding a hotel and allows users to curate their own trips—both for planning and also for posting they’ve returned.

“Eighteen years ago, we revolutionized how people planned their trips by enabling travelers to benefit from the wisdom of the crowds,” said TripAdvisor co-founder and CEO Stephen Kaufer said at a New York event. “We have the most robust data helping us understand what all of you are going through when you’re planning this trip—which stage you’re in, where you’re looking, the past trips you’ve taken.”

Here’s how it works: When users log into their account, they can follow accounts in order to see relevant content from friends, media partners, content creators and brands in a familiar-looking news feed. For example, an article by National Geographic about a city will also prompt several related posts to pop up.

National Geographic and more than 500 media companies, brands and people are part of a beta version of Travel Feed. Others currently using it in beta include Travel Channel, GoPro, Goop, The Points Guy, PopSugar and Giada De Laurentiis.

According to Nicole Brown, senior director of partnerships, the partners using the beta version have an opportunity to build their own audiences.

“The No. 1 goal is really to bring in that inspirational, aspirational content that really can bring people to visit TripAdvisor more often,” she said. “So to make it more of a daily habit to come to TripAdvisor to look at your travel feel while you’re standing in line just at the grocery store, scrolling through and seeing some really great content.”

While there won’t be any ads in the Travel Feed to begin with, travel brands will still be able to place ads within the hotel and restaurant verticals like they currently can. However, a spokesperson for TripAdvisor said that while the business side and social media sides of the business are separate, she wouldn’t rule out the possibility of ads in the future.

TripAdvisor isn’t the first travel platform to try and make sharing trips more social. For example, last summer Lonely Planet announced a new standalone app called Trips, which aimed to turn every user into a travel guide. (At the time, the company’s CEO likened it to a “glossy magazine.”) Meanwhile Airbnb itself has continued to expand from being a place to book homes to a destination for booking activities and tours. And of course, people still turn to their Facebook friends for recommendations—but that only works if the social network’s ever-changing algorithms show it in their friends’ feeds.

There could be another use for anyone that’s recently been to a city where their friends are going next or that lives in a city where they’re frequently asked for recommendations. For example, a person who lives in Boston or San Francisco might compile a list of restaurants and coffee shops they can then send a link for whenever someone comes to town.

While it won’t be clear for a while how many average people decide to use the platform on a regular basis—either for connecting with people and brands about trips or for posting their own—the company said its more than 456 million monthly active users already publish 661 million reviews and opinions to the current version of TripAdvisor. And with the 500 initial partners already using the beta version, it could help create more of a culture of a social network over the next few months might be easier to catch on than others starting from scratch.