The National Football League season reaches its end with Super Bowl LIII Feb. 3, and Twitter shared some data about the two teams who will be facing off: The New England Patriots and Los Angeles Rams.

While the Patriots and Rams are facing off for the Vince Lombardi Trophy, neither club came close to claiming the Twitter crown, as they finished fifth and 15th, respectively, in 2018 Twitter mentions among NFL teams. The top four were the Pittsburgh Steelers, Dallas Cowboys, Cleveland Browns and Philadelphia Eagles.

The top three Patriots plays this season, in terms of tweets per minute, were:

And the top three plays for the Rams were: 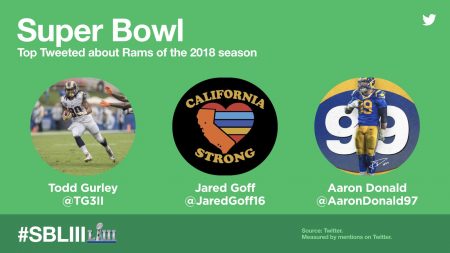 The most-mentioned Patriots players were:

And the most-mentioned Rams were:

The Patriots’ top games of the season, measured by related tweets, were:

And Los Angeles’ top games were:

The most viral tweets from the official Patriots team handle, by times viewed on and off Twitter, were:

Sorry to reign on your celebration. pic.twitter.com/EfXyR1JEna

The most viral tweets from the official Rams team handle were:

???? WE WEARING THROWBACKS AT THE SUPER BOWL! pic.twitter.com/MfHN6W0k4T

The most viral tweets from Patriots players were:

And the most viral tweets from Rams players were:

It’s my favorite play ever https://t.co/YLWi7c3DNE