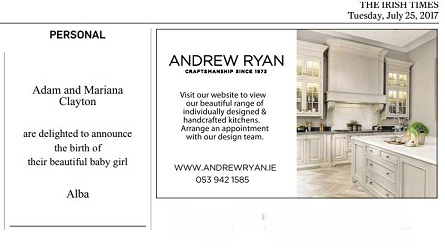 “Want to thank the Arch of bishop for the lend of the hall,” Bono began over the weekend from the stage at Dublin’s Croke Park. “Here we are off Jones Road, Hill 16. C’mon!” U2 is currently in the midst of a European tour swing through France, the Netherlands and Belgium before an August break and a scheduled return to the U.S. in September.

A few days after the hometown concert, the following advertisement appeared in The Irish Times. A modest posting from U2 bassist Adam Clayton and his wife Mariana Teixeira de Carvalho, who married in 2013.

Mrs. Clayton currently works as a director for the Michael Werner art gallery, which has locations in London’s Mayfair district and on the Upper East Side. Congrats to them on the birth of their daughter Alba.

If more well-heeled rockers follow in Clayton’s footsteps, it could make a real dent in the depleted landscape of print-newspaper advertising. And we can’t help but think adjacent advertiser Andrew Ryan, a purveyor of ‘Luxury Bespoke Kitchens’ since 1973, felt like they won the lottery here. Imagine all the extra impressions the company’s “advert” is getting. (It made Fishbowl check out their website; they service Ireland, the U.K. and… Monaco, where maybe one day one or more of the U2 crew will retire.)