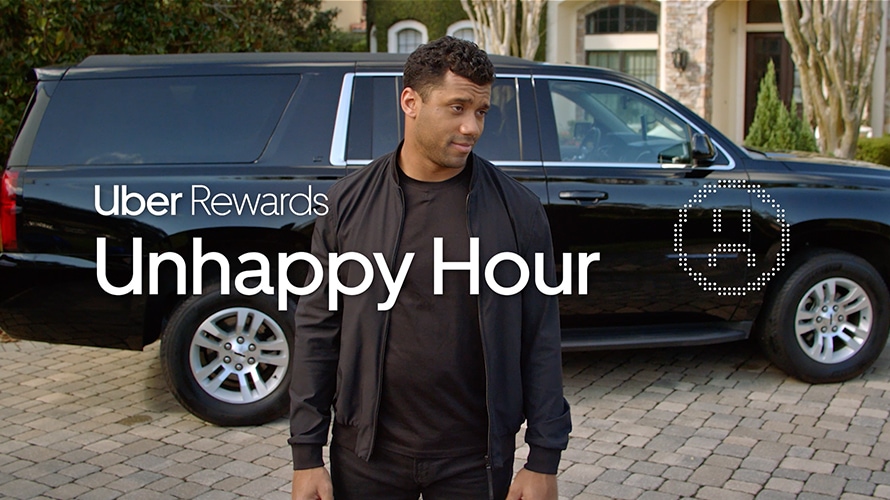 Russel Wilson knows what it's like to lose a Super Bowl (and win one). Uber

After this year’s Super Bowl, Uber wants to give the losing team’s fans something to cheer about: a safe (and free) ride home after they’re finished drowning their sorrows.

To promote its Uber Rewards program, the company will offer riders in the losing city—either Boston or L.A. this year—up to $50 in free Uber credits to members of the loyalty program for the first hour after the game.

The campaign, which begins today and will run on Twitter and Instagram through Sunday evening, features a video starring Seattle Seahawks quarterback Russell Wilson, who knows what it’s like to lose a Super Bowl (and to win one). In 2014, Wilson led the Seahawks to a defeat of the Denver Broncos in Super Bowl XLVIII. However, just a year later, he threw an interception from the one-yard line with 25 seconds left in the game and lost to the New England Patriots by just four points.

The video shows Wilson stepping out of a black SUV with Uber’s logo on the back window before humbly bragging about his own victories in the Big Game and showing off his ring.

“On one hand, I know what it’s like to be a champ,” he says. “And on the other, well you know. But for the city that doesn’t get that ring, Uber Rewards members get free rides for 60 minutes right after the game.”

According to Uber CMO Rebecca Messina, the company is calling the promotion the “Unhappy Hour.” She said Wilson’s own experience winning and losing in the Super Bowl made him the right athlete to promote the campaign.