It seems that every time Facebook makes a change to its News Feed algorithm that affects pages, its advice to page administrators is to find ways to organically engage with people. Online apparel retailer Betabrand is doing just that, but can it keep up?

Betabrand is piggybacking on Facebook sponsored posts by using the comments section as a way to engage with people and potentially convert those interactions into sales, a process social media coordinator Emelia Hildreth calls “adception.” 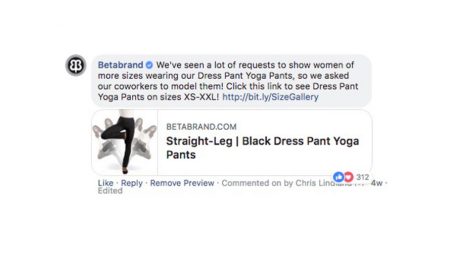 The company focuses on Facebook because the platform accounts for most of its social ad spend, and as a result, most of the revenue it brings in. Vice president of marketing Doug Hoggatt said Betabrand spends “millions of dollars” annually on Facebook and Instagram, but he would not provide further details for competitive reasons.

As for whether the checkout feature Instagram unveiled earlier this week will tilt the balance at all, Hoggatt said Betabrand is not part of the initial group testing the feature, and he didn’t know enough about it to speculate.

“I’d love to be able to branch this strategy out to Instagram, but unfortunately its comment capabilities aren’t up to par with Facebook’s,” Hildreth said. “While we don’t use the same strategy on all other social platforms, we always try to reply with humor when we can.” 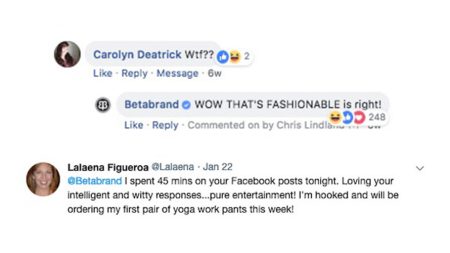 Hoggatt added, “Facebook helps by presenting the most popular comment threads first, so brands don’t have to react to every comment, allowing a focus on making the top comments as informative as possible. Top comments get the most attention, so we focus on turning these discussions into the longest, most entertaining threads.”

The brand sells crowdsourced and crowdfunded clothing. People submit design ideas for voting, and samples of the most popular ones will be created and listed for crowdfunding, and then manufactured and sold if successful. They also have an in-house design team, with some concepts going through the voting process and others going directly into production.

Betabrand has also teamed up with companies like Timberland, The North Face and Mountain Hardware.

Dress Pant Yoga Pants is one of Betabrand’s most popular offerings, with comments on sponsored posts often reaching four-digits, and the company said demand for pockets expressed repeatedly in that forum led to the testing of 14 styles, which drove an additional $2.5 million in sales since last summer.

Hildreth said, “People are pleasantly surprised, if not shocked, by a brand that listens, learns and tries to entertain. It can turn an entire comment thread into a social sales pitch.”

Betabrand founder Chris Lindland also endorsed the strategy, saying, “Every 30 seconds, a potential customer comments on one of our ads. If we’re not standing by to strike up a conversation, how can a relationship ever start?”

Here’s how it currently works. Betabrand runs sponsored posts on Facebook, promoting its brand in general and its most popular products. “Then I go into the comments and dig around for opportunities to be funny or make sales,” Hildreth said. “All of the commenting is organic.”

She does nearly everything manually, using automated responses only for instances such as questions related to shipping. Her responses to comments are tailored to each potential customer and their specific questions or wording, and as you can imagine, it’s a daunting task.

“It is a lot of work, and when our ads are performing well, there are tons of comments to handle,” Hildreth said. “We are in the process of adding more to the team so I don’t have to do it all by myself.”

Will the company keep adding to its social team if it keeps growing and achieves those lofty heights, and will a bolstered social team even be able to keep up with the volume of comments and respond in kind?

Hildreth said, “Some of the most valuable consumer feedback never makes it off Facebook, so if your brand isn’t deep in the discussion, you’re missing out.”

And, Hoggatt added, “We’ve invested our marketing, design and creative departments into this process because it is hyper-relevant to our business. A big part of what we do is give people a vote in fashion, and we’re more than OK starting that conversation in Facebook comments.”