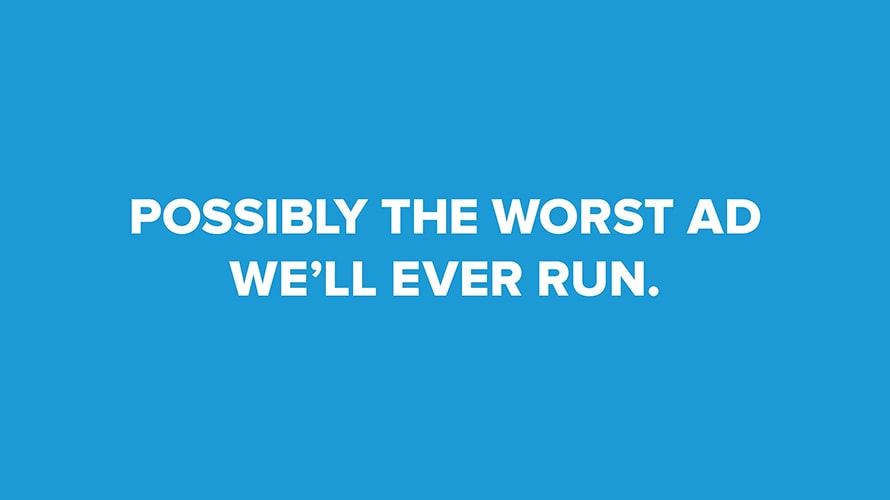 The ads will appear in The New York Times, The Mercury News and The Wall Street Journal. The Trade Desk

The Trade Desk is currently the toast of the ad-tech sector, with the company’s latest earnings report detailing how revenues rose 54 percent year-over-year to hit $112 million in the three months to June 30 and winning favor with investors.

Therefore, the fact that it has today taken the rare step of launching a print ad campaign in the mainstream press raises eyebrows and offers an insight into its eagerness to convince investors of its worth.

The new campaign consists of three print ads with tongue-in-cheek copy that reads, “Possibly the Worst Ad We’ll Ever Run,” “Buying This Ad Was Excruciating” and “This Pretty Much Goes Against Everything We Believe.” 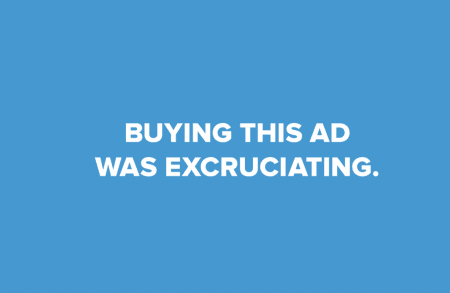 Ads are set to run in business-orientated mastheads including: The New York Times (both the domestic and international editions); The Mercury News and The Wall Street Journal for the remainder of the week commencing Sept. 10. 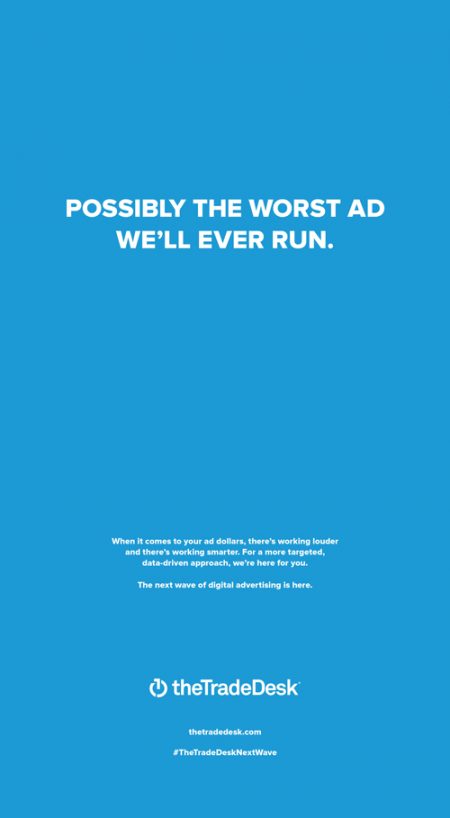 Devised by The Trade Desk’s CMO Susan Vobejda and Jaclyn Ranere, vp of global brand marketing, along with creative shop VSA Partners, the campaign aims to demonstrate that “ads don’t have to be the loudest in the room in order to be the most effective.”

Instead, the programmatic outfit wants to better convince readers–presumably the investor community–that data-driven media campaigns executed using ad tech wares (such as The Trade Desk’s demand-side platform) can be just as effective.

In short, the company hopes the campaign will use “the oldest form of media to tout new narratives” with Vobejda telling Adweek that the campaign “is a good reflection of the company” and geared towards getting advertisers to “think differently.”

“We loved this idea when it first came together. The ads capture the moment where marketing is experiencing a foundational shift from mass media to data-driven, customer targeted digital channels,” she added. 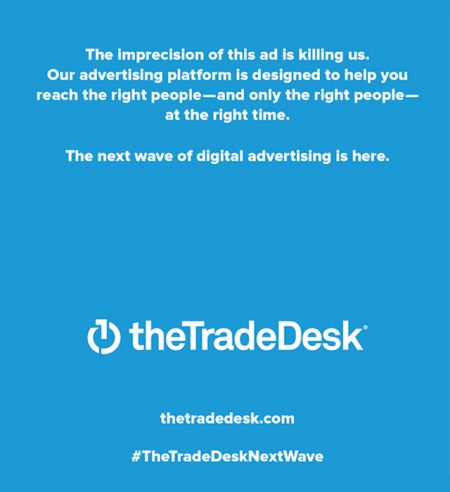 Since its latest earnings call, The Trade Desk’s stock price has been riding the crest of a wave, with its market cap circling around the $6 billion mark this week–consider that ‘the biggest deal in ad-tech history’ was Google’s purchase of DoubleClick for $3.1 billion–arguably making The Trade Desk the standard bearer for the sector.

However, debate does exist as to whether or not this is a fair valuation of the company, with Pivotal Research’s senior analyst Brian Wieser eager to highlight that The Trade Desk’s current high is the result of investors’ willingness “to take a punt” on the stock.

He also goes on to point out that the fact that in recent weeks the trades on the ad-tech company’s stock have averaged around $100 million a day in volume and this is evidence of a difference of opinion among investors.

He adds, “That means one of two possible things: one is that there is an active debate among investors about what the right valuation is; but ultimately it means that everyone is punting, and then you get this momentum-driven trade … and that can add about $1 billion in market cap, that is insane!” he told attendees at an ad-tech conference hosted earlier this week.