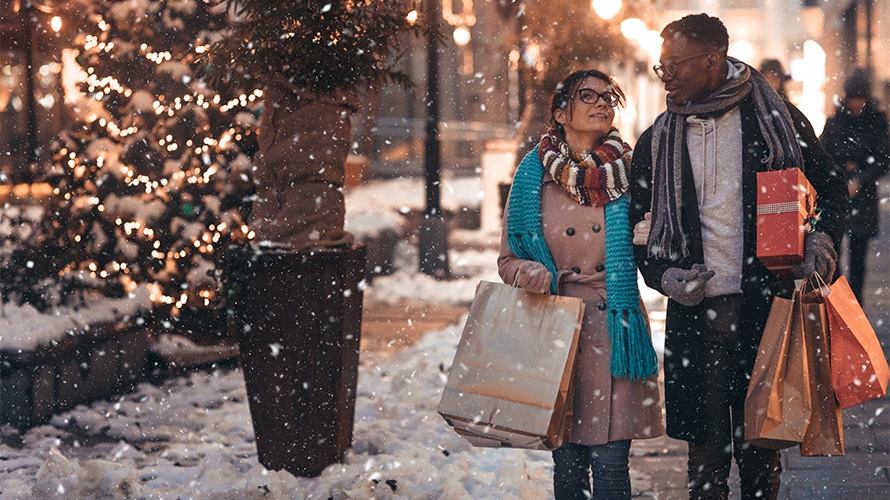 By Dec. 3, 50 percent of all holiday shopping was over. Getty Images

Even though the holidays are long gone, retailers and brands are already looking at data from last season to start planning for next year.

A new report from Salesforce shows how the holiday season shaped up and which trends companies are paying close attention to, like mobile shopping, dates when consumers finish their shopping and the continuing rise of social media’s influence on retail behaviors.

“It’s less about what retailers are doing, but more about the consumer behavior,” said Rob Garf, vp of industry strategy and insights at Salesforce. “The way I see it is [that] social is the shopping mall and the Main Street of the 1950s.”

Smartphones played a big part in various ways this holiday shopping season, from browsing to purchasing. Salesforce reported 48 percent of orders were conducted on a mobile device versus 44 percent on a computer. Almost a third (28 percent) of consumers using a mobile phone also used a digital wallet like Apple or Google Pay, resulting in the consumer saving 90 seconds.

“It’s really breaking down that friction between inspiration and purchase,” Garf said.

Surprisingly, the peak shopping day on mobile was Christmas, with 60 percent of orders conducted that day. Garf said the day accounted for 48 percent of all orders and 66 percent of traffic. It’s an opportunity for retailers to capitalize on, since Garf said the spike was due to gift card redemption and self-gifting. So, while Christmas Day marks the end of the season, the shopping is far from over.

Another area that saw growth this season: traffic share from social, which jumped 22 percent from last year and can be tied to increased mobile usage, with Facebook and Instagram claiming 93 percent of all visits. During Cyber Week (which Garf defines as Tuesday before Thanksgiving through Cyber Monday), 8.5 percent of all mobile traffic was from social media, with Thanksgiving day claiming 10 percent of that traffic. Some of the top retailers on social this year were Amazon, Walmart and Etsy, with Nike, Apple and Nintendo claiming the top brand spots.

Reach customers where they are

On Cyber Monday, 4 billion messages were sent across text, push notifications and email. During Cyber Week, SMS texts were up 57 percent year over year, with a 159 percent increase year over year on Thanksgiving Day alone. However, Garf said retailers carry a risk of sending too many messages if you’re not thinking about the customer.

“You want to create something that adds value and creates convenience,” Garf said.

Garf said AI powered recommendations are a tool retailers can use to avoid “discount chicken,” a term describing retailers rolling out discounts early in the season.  The data showed that 16 percent of consumers that click on an AI powered product recommendation have a 14 percent average order value versus people who didn’t click on one.

“If you actually serve up the right product at the right time, you don’t actually you don’t necessarily need to discount,” Garf said.

Shipping for free is the new expectation

During Cyber Week, 80 percent of orders were shipped for free, as compared to 68 percent of orders after this time period. Thanksgiving Day saw a discount average of 27 percent, with “record high discounts” on Cyber Monday. However, average order value decreased as the holiday season continued. Garf said retailers offering free shipping without a minimum purchase order led to that result. The Amazon effect is real.

How the season shook out

So, while the big shopping days definitely still matter, there are plenty of other points in the season to capitalize on shoppers trying to get the best gifts for Christmas.