The Hollywood Foreign Press Association does not officially announce its new members. The deadline for applications this year was February-March, and a list of members that once adorned the organization’s official website is no longer there. 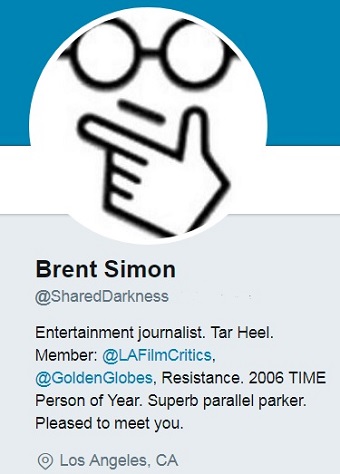 However, if you look at the Twitter bio of L.A.-based journalist Brent Simon, boom! He is now a card-carrying member of the HFPA. Simon, who served formerly for several terms as president of the Los Angeles Film Critics Association (LAFCA), works currently for Mtime, a Chinese website.

The organization will have another such matter to celebrate this coming Wednesday when they hold their annual Grants Banquet at the Beverly Wilshire Holtel, hosted by Chelsea Handler. Earlier this summer, Meher Tatna was elected president of the organization, succeeding Lorenzo Soria. Originally from Mumbai, Tatna earned a B.A. from Brandeis University and has been an HFPA members since 2002. She was previously vice president of the journalist group and will be making her first ceremonial remarks Wednesday.

We’re not sure if Simon has been joined on the HFPA rolls in 2017 by others, though we are guessing there are likely one or more additional new members. Our heartiest congrats to Mr. Simon, a tremendously well-respected and hard-working North Carolinian, as well as one of the nicest entertainment journalists patrolling the Hollywood celebrity interview and film festival beats. He remains, as indicated, a member of LAFCA and also earlier this year accepted the 2017 International Media Award from the Publicists Guild.

Clarification (Aug. 3):
We failed to make clear here a very important detail. Simon was actually voted into the HFPA in 2016 and then promoted this year to full, active status. Fishbowl apologizes for not including that timeline.

Previously on Fishbowl:
The Grand HFPA Membership List
In 1944, It Was a Much Simpler Golden Globes Ceremony
Meet LAFCA’s Fully Accredited HFPA Member