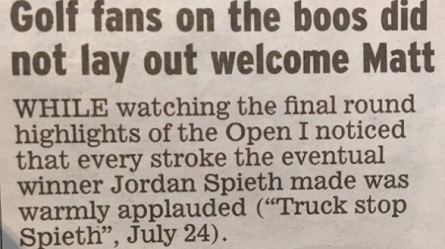 Via Alex Myers, a senior writer for Golf Digest, comes a reminder that in this wired world, not all things have fully crossed the Atlantic.

Above is a letter-to-the-editor published July 25 in U.K. newspaper The Daily Express. Complete with added puns in the headline for “booze” and “doormat.” The author, Jim Bowens, failed to understand while watching The 2017 British Open that what sounded like fans booing runner-up Matt Kuchar was actually enough of an Americanized contingent hollering, “Kuuuuuuuch!”

At the Golf Channel coverage-end of this topic, the Grill Room team roped in a bit of historical context that will likely make Mr. Bowens feel a bit less foolish. In 2002, Bernard Langer was similarly confused by the gallery’s behavior during a round with Luke Donald.

In the letter, mention is made of “Truck Stop Spieth.” That was the Sports section headline used by The Daily Express following Jordan Spieth’s miraculous recovery in the final round after shanking his 13th hole tee shot into an out-of-bounds parking area occupied by tournament sponsor trucks. The 23-year-old phenom’s next stroke, an iron shot Tiger Woods in his prime would have been proud of, was launched in-between semis belonging to Teitlist and Wilson. 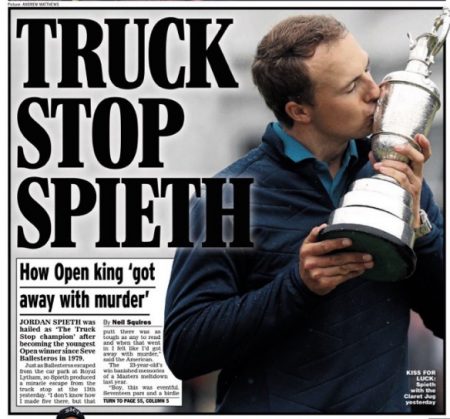