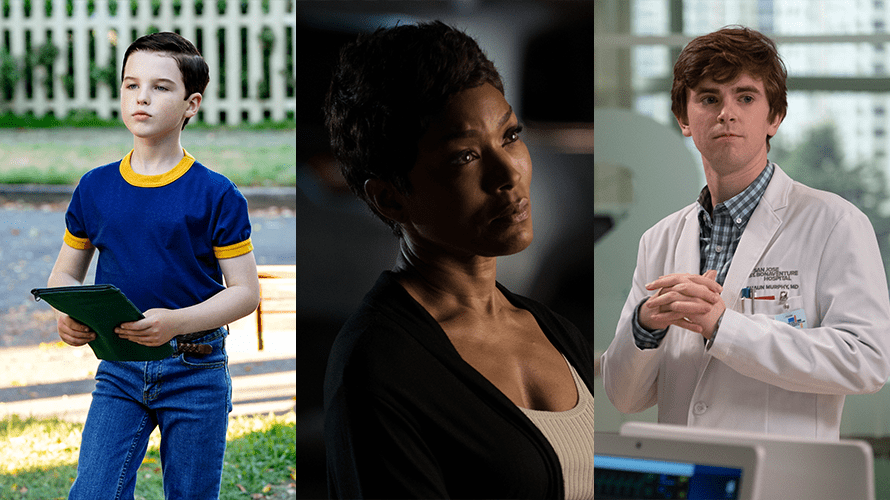 There’s only one thing harder than creating a new broadcast TV hit: building on those ratings in the series’ sophomore season. Time and again during the past few years, a freshman phenom has broken through in a big way—like Empire, How to Get Away With Murder, Blindspot and Quantico—only to lose a large portion of that audience in Season 2, if not by the end of Season 1.

Only This Is Us has been able to avoid the sophomore slump across broadcast, as Season 2 of the NBC drama was the highest-rated entertainment broadcast series in the adults 18–49 demographic last season, with a 5.4 rating.

Now, last year’s trio of breakout freshman shows—CBS’ Young Sheldon, Fox’s 9-1-1 and ABC’s The Good Doctor—hope to follow This Is Us’ same trajectory as they return next week for their second seasons.

The procedural drama 9-1-1 was an instant midseason hit for Fox when it debuted in January, so the network brought it back in the fall. Not only that, but Fox will air 9-1-1’s Season 2 premiere on Sunday, immediately following an NFL on Fox doubleheader game, which should give the show a huge premiere number. The second part of 9-1-1’s season premiere will air the following day in the drama’s regular Monday 9 p.m. ET time slot.

“That show was just getting started last season,” said Michael Thorn, president of entertainment at Fox. “We didn’t make that many episodes. This year, the first couple of episodes are fantastic story ideas, and we’re going to use football to give 9-1-1 a special launch. Through sheer innovation, the nature of the concept and the way we’re going to launch it, our hope is that we’ll avoid [a sophomore slump].”

Thorn suggested that 9-1-1’s mix of procedural and serialized elements will be a benefit as the show tries to continue its momentum in Season 2. “Unlike a true serialized soap, we have these visceral 911 calls every week that gives us those close-ended stories and that engine,” he said. “So our thinking is that we have all the great character drama that you would get from a soap, but we have the benefit of the spine of the first responders.”

Fox also has faith in the show’s creators—Ryan Murphy, Brad Falchuk and Tim Minear—to navigate any potential sophomore season minefields, which is something that CBS echoed when discussing its own hit from last season, The Big Bang Theory prequel Young Sheldon.

“I might buy into that [idea of the sophomore slump] if it was anybody other than [creators] Chuck Lorre and Steve Molaro,” said CBS entertainment president Kelly Kahl about Young Sheldon. “They have such vision for the show and for the characters and amazing specificity as to what they want. So if there’s a show I’m worried about a sophomore slump, that one’s not it.”

Like Fox’s NFL lead-in for 9-1-1, CBS is also giving Young Sheldon the best launch possible on its network, by continuing to air the series immediately after The Big Bang Theory. That show, which is going into its 12th and final season, remains the number one primetime show in total viewers. Both sitcoms will debut on Monday night before settling into their Thursday night homes three days later.

ABC entertainment president Channing Dungey opted to keep the show in its Monday 10 p.m. time slot rather than relocate it to help it boost another show, which could have potentially disrupted viewing patterns and dented The Good Doctor’s audience. “There’s something to be said for stability and consistency on Monday nights,” Dungey told Adweek earlier this year.

Executive producer David Shore told Adweek in March that Season 2 will continue along the same path that hooked audiences last fall. “I just want to continue exploring this character and what he learns,” said Shore. “But more importantly, I think the fundamental thing about this show is what can we learn from Shaun Murphy, and I’ll continue to explore that question.”