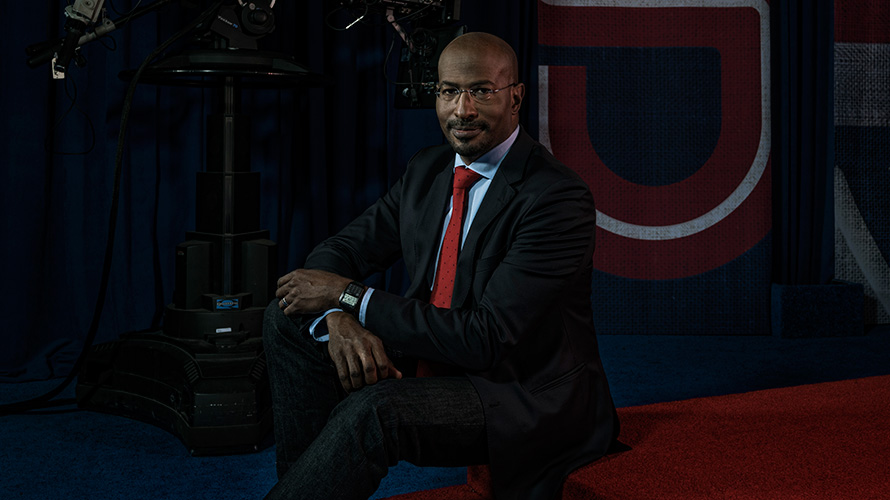 Van Jones surprised his CNN colleagues the evening of Feb. 28 when he effusively praised a portion of President Donald Trump’s address to a joint session of Congress: “He became president of the United States in that moment, period,” the left-leaning political commentator proclaimed. “That was one of the most extraordinary moments you have ever seen in American politics. Period.”

Jones was referring to the moving moment when the president honored the widow of William “Ryan” Owens, the Navy SEAL who was killed during the January raid in Yemen. It became yet another viral sound bite from the commentator, who has been one of Trump’s most vocal critics since the real estate mogul announced his candidacy for president. Following Trump’s victory, Jones even went so far to as to describe the president-elect’s Nov. 8 victory as “a whitelash.”

While Jones has attempted to clarify those comments in recent weeks, explaining on The View that he wasn’t referring to all Trump voters, just “the alt-right and the neo-Nazis who were celebrating,” they ignited a social storm that significantly raised Jones’ profile–for better or for worse, depending on which side of the political divide viewers fell.

"I’m trying to get to a place where we can have a different kind of conversation where the goal isn’t to just bludgeon the other side."
Van Jones

Jones is no stranger to controversy. He had a brief stint as a green jobs adviser in the Obama administration but resigned in 2009 when a public feud with former Fox News host Glenn Beck became too much of a distraction. “It was very painful at the time, and I didn’t think that I would ever recover professionally or emotionally,” Jones admitted. “But anyone who’s gone through something really tough like that has to just keep on living because neither success nor failures are permanent conditions.”

In addition to being a Yale Law graduate and longtime activist—he founded a number of not-for-profits engaged in social justice, including job accelerator Dream Corps—Jones had a stint as host of CNN’s rebooted Crossfire in 2013 before establishing himself as one of the network’s go-to progressive political analysts and host of his own show, The Messy Truth.

Here, Jones talks about his role as a commentator navigating the uncharted political waters and how the media is faring in the age of fake news and partisan politics.

Adweek: What’s your take on the state of political coverage?
Van Jones: The press is trying to hold the administration accountable for their actions, and this one has said and done unprecedented and bizarre things. That makes holding them accountable a harder task. It’s interesting, the entire national conversation of the left and the right has now boiled down to a simple statement: “I’m right, you’re wrong.”  End quote. Full stop. We’re not talking to each other; we’re talking about each other.

And that’s sort of what I’m wrestling with in my role and my show, The Messy Truth. I’m trying to get to a place where we can have a different kind of conversation where the goal isn’t just to bludgeon the other side with your talking points, but it’s really something more basic, which is the quest to understand and to be understood. When I go out to West Virginia or Ohio, Pennsylvania, Arizona to talk to Trump supporters, I’m not trying to catch them in the act of being awful people. I’m not out there trying to do “gotcha” segments.

Based on those cross-country Messy Truth specials, what should Madison Avenue know about blue-collar America?
They’re proud, and scared. Some of the positive values in great abundance in the heartland are not necessarily celebrated in the culture. Things like neighborliness, work ethic, family first. These people feel a little overlooked and left behind by the latest lingo around immigrant rights or transgender liberation. It’s not their reality. Progressives like myself are shoving a lot of change down the throats of middle-aged, lower middle class white guys. Change is hard. While progressives should not let up, I do think that we should be a little more understanding that some people experience that change as a loss.

After Trump was declared the winner of the election, you said on air: “How do I explain this to my children?” So how are you explaining the current state of affairs?
I point out to them that both Democrats and Republicans are a lot better than this. That this is what happens when both parties don’t do what’s best. Republicans are supposed to defend the Constitution, stick up for clean government, be patriotic defenders against foreign enemies like Russia. Right now, they’re not doing those things, but they’re not terrible. Democrats are supposed to stick up for underdogs, including people who are transgender, immigrants, the poor, as well as the white guys who have gotten the short end of the stick. We need to do better.

How are the Trump advisers faring these days?
They’re probably doing the best they can with what they’ve got. President Trump doesn’t seem to understand the mechanisms of government and some of the traditions that he’s upending, so he’s probably a hard person to advise. There’s a reason presidents measure their words carefully, and why they go out of their way to show respect to other institutions. It’s hard to make chicken salad out of chicken feathers. I also think there’s a danger for the advisers of eroding their own credibility and standing over time when he says things that are ludicrous.

At South by Southwest, you spoke against the concept of “safe spaces” for students on college campuses. Why go there?
I am for one kind of safe space and concerned about another. Every student should be physically safe and free from targeted harassment. But it seems as though there’s this new definition of “safe space” which indicates that students should be ideologically or emotionally protected from arguments they find threatening, or offensive. Campuses are places where people should be exposed to offensive, even upsetting speech. Students should take advantage of the opportunity to learn how to speak back. I don’t want students to be ideologically or emotionally safe; I want them to be strong, and that requires being challenged.

So, it can’t be politics 24-7. How do you decompress?
Well, I’m still a geek—comic books, science fiction, anything science related. Fundamentally, I’m a Marvel comic book kid that somehow wound up being six-foot-one and 190 pounds. So I can now go around and try to enact some of those fantasies from childhood that’s, you know, standing up to a bad guy or sticking up for the people who need a little bit of help. 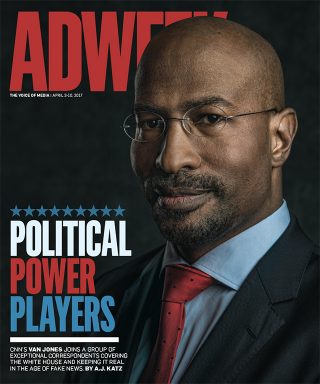 Click for more from this issue
This story first appeared in the April 3, 2017, issue of Adweek magazine. Click here to subscribe.
@ajkatztv aj.katz@adweek.com A.J. Katz is the senior editor of Adweek's TVNewser.