Condé Nast had its NewFront at a restaurant in Hudson Yards today. Sara Jerde

As subscription-based video services become more standard, Condé Nast hopes to fill that void for advertisers on all its platforms to become “the new prime time.”

Pitching advertisers at its NewFronts event, held at the newly opened Mercado Little Spain in Hudson Yards, execs said Condé Nast has a slew of new and returning video series and a new partnership with Nielsen to further legitimize its video views.

In the migration to digital, TV buyers have lost the same sort of scale and transparency about what they were buying, Condé Nast CMO and CRO Pamela Drucker Mann told Adweek. “You knew who you were reaching, but you didn’t know … where your content was going to live.” The partnership with Nielsen is a step to try and correct that gray area, she said.

“I love that combination because it’s a new network way of thinking with a traditional measurement tool,” Drucker Mann said.

Condé Nast commissioned the study from Nielsen that found a 15% lift in brand familiarity and 36% lift in purchase intent between those shown Condé videos and those who were not.

Executives also revealed a new ad offering, dubbed Condé Nast Prime Time, which is an expanded version of the platform they rolled out last year, but now includes inventory across YouTube and OTT.

Those who attended the presentation sat near a marquee designed to tout programming from Condé, which will include 175 new pilots this year, said Oren Katzeff, president of Condé Nast Entertainment, who joined from Tastemade last year.

One of those programs will be called Go Ask Anna — featuring editor-in-chief of Vogue and artistic director of Condé Nast Anna Wintour — in which people ask Wintour advice and she answers desk side.

Those in the room got a thrill when Wintour came out on-stage to take part in a live Q&A, with some of the questions coming from editors from other Condé brands. (She’s not endorsing “Mayor Pete” but likes his “story”), thinks crossbody bags are very in and thinks all-black outfits should probably be avoided all together.

In the past year, Condé Nast launched two new OTT channels, for Wired, then Bon Appétit. Execs had previously said there would also be a new GQ OTT channel, which is expected to launch later this year.

This year, the company said that GQ will get even more video play with a new sports channel on YouTube that will cover topics including culture and style.

“Viewers aren’t watching platforms; they’re watching content. And they’re discovering that content through search many times,” Drucker Mann said. “They’re chasing the content, and the idea that they’re going to spend all their time on one platform is not only not realistic, it’s not indicative of real consumer behavior.” 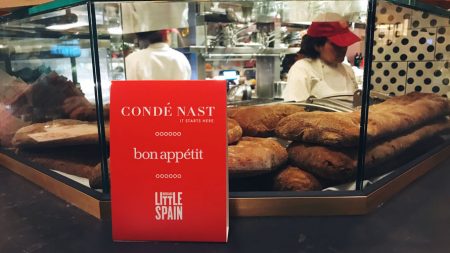 Condé Nast will also partner with Twitter for greater access to some of Condé Nast’s tentpole events, which it has made greater investments in throughout the year, including Vanity Fair’s New Establishment Summit, WIRED25 and The New Yorker Festival.

The company attracted over 14 billion digital views in 2018, which represented a 16% year over year increase, according to Condé Nast. Its programming was nominated for an Academy Award, had two ASME nominations and won five Webby awards.

This also marked the first time Condé Nast has held a NewFronts with a “global CEO”—a new title given to Roger Lynch (formerly Pandora CEO) earlier this month after its board combined Condé Nast and Condé Nast International into one entity. Lynch’s first day at the company was a little over a week ago.

Condé Nast has made a point to launch video content across platforms, a tactic that execs stuck to today as they teased new and returning programming, including Condé Nast Traveler’s Say I Sent You, a travel guide for Instagram Stories; a new season of It’s Alive: Goin’ Places from BA’s Brad Leone showcasing new culinary destinations on the BA OTT channel; and Glamour’s Queenpins, an eight-episode series from Keke Palmer on Glamour’s Facebook page.

Though the shows will appear on each of these platforms, Drucker Mann said the company is focused on and committed to producing quality programming.