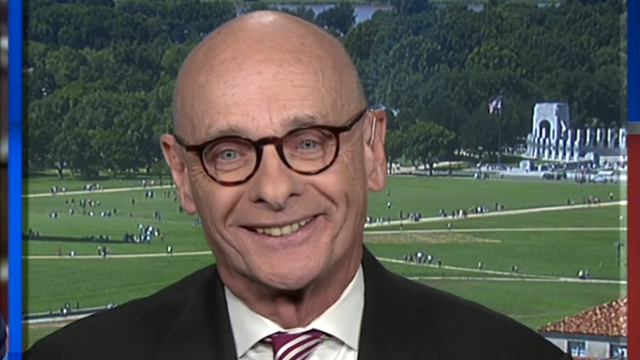 The full-page ad that Fox & Friends took out in The New York Times on Thursday was a perfect illustration of how Fox & Friends shapes its world.

The ad was a quote from a column by James Poniewozik that contained lines like, “Diagraming the feedback loop between ‘Fox & Friends’ and the president requires a very small bulletin board and maybe six inches of yarn.”

On Sunday’s Reliable Sources, host Brian Stelter addressed the serious flipside to the quote flaunted in fun. “Now, if you buy into that premise, then surely you agree that Fox & Friends, with great power, also has great responsibility,”

“At this moment in time, when the president and his aides are regular guests, as well as viewers, these conservative talk show hosts may or may not consider themselves reporters, but they have an obligation to be careful like reporters, to be correct, to be fair, if not balanced,” he said.

Stelter’s version of fair also necessitated him adding that CNN and MSNBC have that same responsibility, but back to the real subject at hand. “My question is,” continued Stelter, “do the hosts of Fox & Friends think about that when they wake up in the morning?”

We’re going to give this a pause for rhetorical effect for a moment, but Stelter did bring on Baltimore Sun critic David Zurawik to discuss the Fox News Channel/Fox & Friends approach.

For one, Zurawik dismissed the idea that a show that deals in opinion is exempt from attempts at accuracy.

“Even if you’re not doing hard journalism, especially on a news channel, you have a tremendous responsibility, because all of the shows help set the parameters of conversation in America, the civic conversation of American life,” he said.

“And when you are as reckless and, in some ways even I would say dishonest as these guys, you’re dangerous. And now that you have Trump and them doing this Twitter dance and feeding each other, it’s even more dangerous.”

Zurawik warned about the damage the network’s alignment with Trump may have on its long-term reputation. “The way [Trump] seems headed, this is going to end not just in embarrassment, but infamy,” he said. “And if you are the channel that goes down with that boat, it’s going to be really hard to salvage anything for your brand. It’s a very risky strategy by Fox. It’s a cynical strategy.”

Watch the interview below.