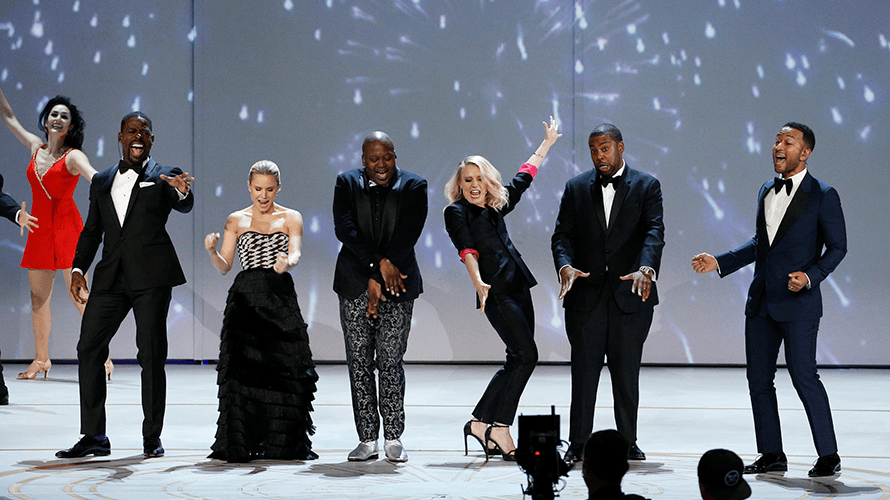 Monday night’s 70th Primetime Emmy Awards were not immune from the TV awards show audience exodus. The NBC telecast was watched by 10.2 million total viewers and received a 2.4 rating in the 18-49 demo, according to Nielsen’s fast official numbers. Both represented all-time lows for the telecast.

The total audience fell 10 percent from last year’s Emmys, which were on CBS and watched by 11.4 million total viewers and hit a then-low 2.5 in the demo. The 2016 Emmy telecast on ABC had the previous lowest total audience number, with 11.3 million tuning in to go along with a 2.8 demo rating.

It should be noted that this year’s Emmy telecast fell on a Monday night, not the traditional Sunday night, because NBC isn’t about to mess with its Sunday Night Football package, which doubled the Emmy ratings. Sunday’s NFL game between the New York Giants and Dallas Cowboys was watched by 20.7 million and had a 7.0 demo rating.

The Emmys is the third major awards show telecast this year to see double-digit ratings declines. In March, the Oscars audience plummeted 20 percent, with 26.5 million, while the demo rating dropped 25 percent to 6.8, its lowest ever.

Two months earlier, the Grammys, which aired on CBS, saw a 24 percent decline in total audience to 19.8 million viewers, its lowest total in nine years. The demo rating dropped just as precipitously, to a 5.9.

January’s Golden Globes on NBC, also lost viewers, but those declines were much smaller than the other awards shows—total audience fell 5 percent to 19 million, and the demo rating dropped 11 percent to 5.0.

There wasn’t much for the broadcast networks to celebrate during Monday’s ceremony, as HBO, Netflix and Amazon dominated ad-supported TV.

The broadcasters only won two awards during Monday’s telecast. Saturday Night Live was honored for variety sketch series, and ABC picked up a directing for a variety special Emmy, which led to the night’s best moment: Glenn Weiss, who won for directing this year’s Oscars, capped his speech by proposing to his girlfriend onstage.

There are no signs the trend will change anytime soon, as Fox, NBC, ABC and CBS just set a new deal with the Television Academy to rotate Emmy rights through 2026. Fox will broadcast the ceremony next year.