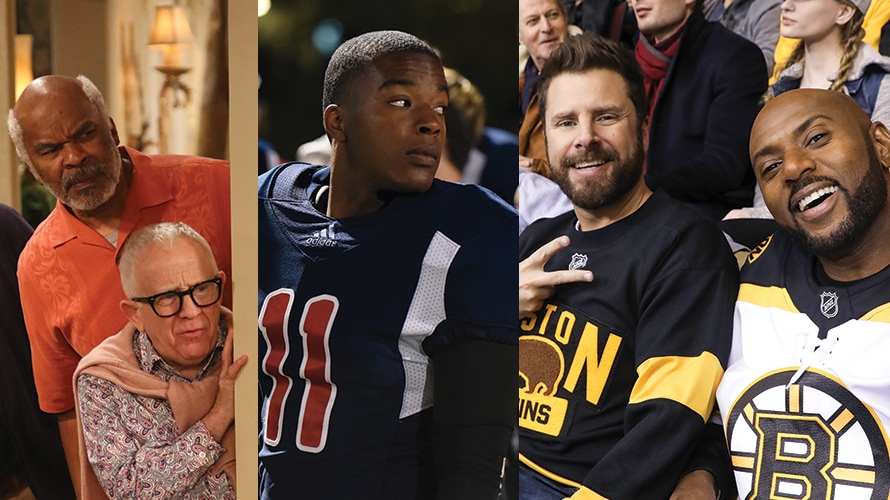 Buyers aren't fans of The Cool Kids, but are optimistic about All American and A Million Little Things. Fox, The CW, ABC

Twenty-two new prime time broadcast series are debuting this fall as the new TV season begins today. Last week, Adweek told you which six of those freshman shows are actually worth watching, and now it’s time for buyers to weigh in with their thoughts on the new fall pilots they love—and hate—the most.

Overall, buyers are more bullish on the freshman class than Adweek was, at least when it comes to the new dramas.

“There seems to be a lot of quality across both cable and broadcast. In years past, we’ve often left upfront week feeling less enthused. But there was a lot of enthusiasm coming out of what we saw across both network and cable leading up to and during the upfront,” said Carrie Drinkwater, executive director, integrated investments at MullenLowe’s Mediahub.

This fall, “there are some really strong dramas, especially from ABC and NBC,” said Maureen Bosetti, chief investment officer at Initiative. “I think the dramas were definitely much better than the comedies. The comedies were a bit disappointing.”

No single show was cited by all buyers as being among the strongest new shows, but two dramas were mentioned multiple times: ABC’s relationship drama A Million Little Things, which many buyers saw as ABC’s attempt to have its own version of This Is Us, and The CW’s high school football series All American.

“I think everyone, including myself, is excited about A Million Little Things,” said Drinkwater. “ABC’s done a great job of promoting it, targeting it to the right audience—that This Is Us audience.”

Bosetti agreed. “If that can catch on in a similar way and have strong compelling characters and storylines, I thought that had a lot of potential to be a hit.”

There was also a lot of enthusiasm about All American, going back to The CW’s presentation for the show at May’s upfront. “It was like a movie. It looks really good. I think that’s going to do quite well,” said Betty Pat McCoy, svp, managing director and director of investment at GSD&M.

Beyond those two shows, there wasn’t anything that several buyers seemed to get behind. Neil Vendetti, president of investment at Zenith is intrigued by NBC’s medical drama New Amsterdam. “Having the lead-in of The Voice and This Is Us for New Amsterdam is a good thing,” said Vendetti.

He also pointed to ABC’s ’70s comedy The Kids Are Alright, which “should be fairly client-friendly” for advertisers.

McCoy said she was hopeful about CBS’ Murphy Brown revival. “It does have good chemistry, and the writing in the past was good. If they stay current, it will be topical that I think people are interested in,” she said. “They have to be very careful of tempering it—not too much to take away her edge, but enough that you’re not going to turn off people who don’t agree with everything she says.”

Drinkwater is also intrigued by The Alec Baldwin Show, ABC’s prime time talk show hosted by the actor, which “has potential to be amazing.” But she is baffled at why the network has done so little promotion for the show. “Given the political climate, I think what he does—and he certainly attracts a very A-list celebrity following—will be interesting,” Drinkwater said.

While there wasn’t much consensus on the best shows, there was more agreement about the other end of the quality spectrum, with concern about the overall quality of CBS’ new sitcoms. “CBS is in trouble; they need to find a comedy,” said one anonymous buyer.

The Neighborhood was singled out as among the weakest of the new fall shows. “I didn’t think it was funny—and that’s Monday nights at 8, which is a pretty important night for them,” said another buyer. “That was disappointing.”

Then again, “some people might think it’s the best thing ever,” said another of The Neighborhood.

There were no such glimmers of hope for The Cool Kids, which multiple buyers dismissed as “terrible.”

Still, there are fewer out-and-out duds this fall than in recent seasons. “Obviously not all these shows are going to succeed, but I don’t think there’s necessarily the same one or two shows that in the past couple of years you could easily say, ‘Well, that thing is going to flop and will be done in two episodes.’ Maybe that’s a plus,” said Vendetti.

Each new fall season is a crapshoot, for both buyers and viewers, but “you’ve got to place your bets somewhere,” explained Bosetti. “We know we’re going to have [around] 20 percent of our investments come in new programming. We have to go to our clients with some educated forecast in terms of a program that we think is going to be successful because you can’t rely only on the existing programs.”

And even though buyers have their opinions about which new shows they like most and least, their approach to media buys is often less about specific series and more about the network as a whole.

“When we look at a network schedule, it’s really, is there overall stability and strength, and are there any glaring holes?” said Vendetti. This year, “I think each network stayed pretty true to its identity.”