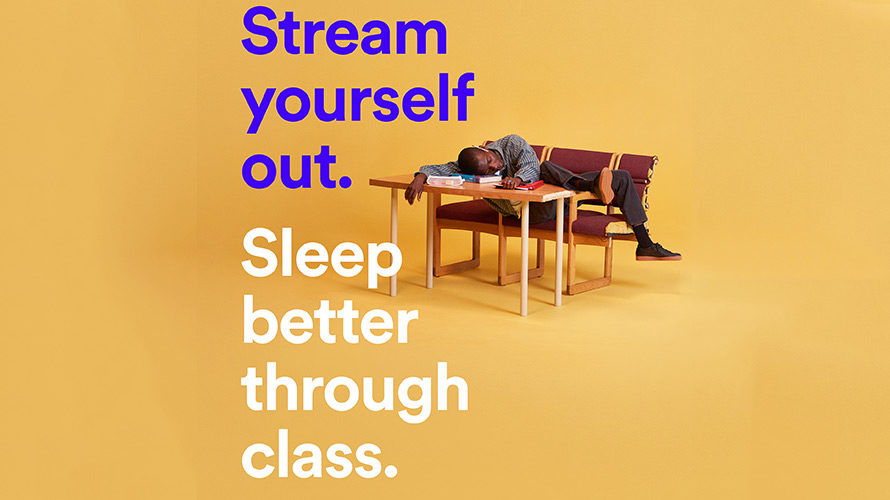 After broadening its subscriber base in May with its livestreaming TV bundle, Hulu is at again, teaming with Spotify for a new discounted streaming bundle that in essence gives Hulu to college students for free.

Hulu and Spotify announced today that they’ve partnered to enhance the Spotify Premium for Students streaming plan, by adding Hulu access for the very same $4.99-per-month rate that Spotify had already been charging students just to stream music. With a new, clunkier title—Spotify Premium for Students, now with Hulu—the plan allows students to stream music, movie and TV offerings from the two companies.

Eligible undergraduate students, who are enrolled in a U.S. Title IV accredited college or university, can have access to Spotify Premium and Hulu’s standard “limited commercials” plan (which usually costs $7.99 per month), through one subscription, at $4.99 a month.

And this is just the beginning: the companies said they will be creating bundled offerings of their two subscription services for broader markets. 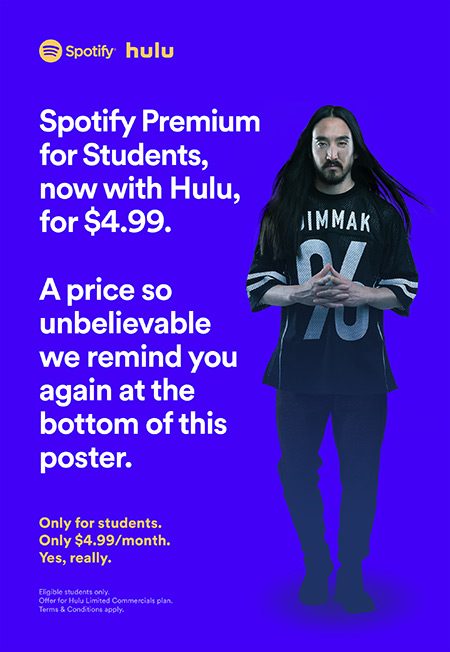 “By bundling our enormous catalogues of content together in a single, highly compelling offer, we’re making it easier for people to enjoy all of the TV and music they love, whenever and wherever they want,” said Tim Connolly, svp and head of distribution and partnerships at Hulu, in a statement.

Added Alex Norstrom, chief premium business officer at Spotify, in a statement, “We’re very excited to be partnering with Hulu—a like-minded company which is as focused as we are on delivering the very best in high-quality streaming content. ”

Norstrom said that “millions” of students are already on Spotify Premium. Those subscribers will need to access their accounts and switch their plan to Spotify Premium for Students, now with Hulu.

Both streaming services launched in 2008. Spotify says it has more than 140 million active users, and more than 60 million paying subscribers across 61 markets. As of May, Hulu has 47 million unique viewers, and the service said 32 million of them, or 68 percent, opt for ad-supported content.

During its most ambitious year yet, Hulu has made a number of significant moves to broaden its subscriber base. In April it launched the critically acclaimed The Handmaid’s Tale, which received 13 Emmy nominations. Among them: best actress in a drama for Elisabeth Moss, who could be the best thing that ever happened to Hulu.

One month later, Hulu launched its live TV streaming service, offering access to live and on-demand programming on more than 50 channels, along with a Hulu subscription, for $39.99 per month.

By including its service as what amounts to a free add-on for Spotify subscribers, Hulu hopes to build a loyal audience of college students, who would then start paying standard subscription rates after graduation.