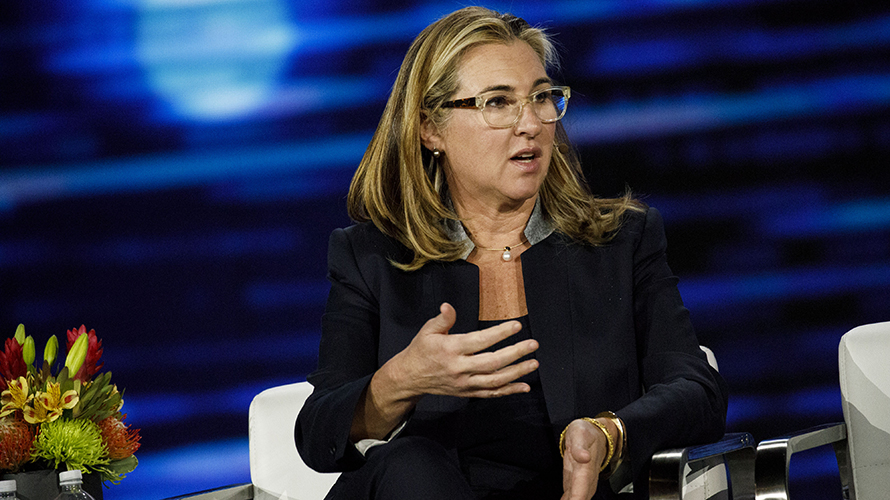 Nancy Dubuc will leave A+E on April 16 after almost two decades at the company. Getty Images

A month after losing out on the chance to become Amazon Studios’ next chief, A+E Networks president and CEO Nancy Dubuc announced that she is leaving the company on April 16 after almost two decades. The exec is finalizing a deal to replace Shane Smith as Vice Media CEO.

The Vice Media deal is not closed, but Dubuc is in “advanced talks” with the company, according to a source. If the deal is completed, Dubuc will replace Vice Media founder Smith as CEO. However, Smith would not leave the company, and is expected to stay on in a role in which he could focus more on content.

UPDATE: On Tuesday afternoon, Vice Media announced that Dubuc would indeed be joining as CEO, with Smith becoming executive chairman to focus on strategic deals and content development.

In a statement, Smith called it a “perfect partnership,” explaining that Dubuc is “better than me at everything” and as executive chairman, “I can concentrate on the only things that I am good at: content and deals.” Together, Smith said, he and Dubuc are “a modern day Bonnie and Clyde and we are going to take all your money.”

Dubuc said Vice is a brand with “tremendous opportunity” and that “the opportunity to partner with all of the incredibly creative people across the entire company was one of those rare moments in a career.”

Until Dubuc’s replacement is named, Abbe Raven, A+E’s chairman emeritus and former CEO, who retired in 2015, will return to the company as acting chair and will oversee the transition.

Dubuc’s move comes just three days before A+E’s upfront event for buyers and advertisers. There was no immediate word from the company whether Raven will be in attendance at the event to help calm buyers after Dubuc’s surprise exit.

“In her roughly 20 years at A+E Networks, Nancy played a major role in building the success of A&E, History and Lifetime, and we thank her for her leadership. We are also very grateful to Abbe, a former CEO of the company and one of A+E’s first employees, for agreeing to return on a temporary basis as acting chair,” said Hearst president and CEO Steven Swartz and Ben Sherwood, co-chair of Disney Media Networks and Disney-ABC Television president, in a joint statement. Disney and Hearst jointly own A+E Networks.

In her own statement, Dubuc said, “Anyone who knows me well knows I am an entrepreneur, creator, rebel and disruptor at heart. I have a famous neon sign in my office that blares, ‘Who dares wins.’ After 20 years at A+E, the hardest thing will be to leave the people and company I love. But, as a creative executive and leader, and to stay true to my personal mantra, I need my next dare and my next challenge.”

Dubuc continued, “I have supreme confidence in the brave storytellers and management team A+E and I will always be rooting for and watching proudly from the sidelines—even as I head off to my next adventure.”

Dubuc, who has been A+E CEO since 2013, had been a finalist for the Amazon Studios job that ultimately went to Jennifer Salke last month. While she publicly took herself out of the running for the job just prior to the Salke announcement, sources said that Dubuc had been deeply disappointed to lose out.

And the same could be said of A+E upper management, which had also assumed Dubuc would be exiting and began planning their next moves, according to a source. Once the Amazon job went to Salke, some started to look for other jobs, which could have prompted the move, especially with Dubuc nearing the end of her contract. Now, “everybody’s happy, especially Abbe,” said one source.

The most likely candidates to replace Dubuc, according to sources, are Paul Buccieri, president of A+E Studios and A+E Networks Portfolio Group, and David “Digger” Granville-Smith, the company’s COO and CFO.

The move could ultimately help stabilize both A+E and Vice Media, where Dubuc will face a challenge similar to the one that would have awaited her at Amazon Studios, in the wake of former chief Roy Price’s exit following sexual harassment allegations.

The company was also sued last month by a former employee who claimed that Vice Media marginalized and discriminated against women by paying men more for similar work.

In her new job, Dubuc will still be involved with A+E, which jointly owns Viceland with Vice Media. The network has been struggling since it launched in 2016, but will still be part of A+E’s upfront on Thursday.

Vice Media, which launched in 1994, also includes an international network of digital channels, a TV and film production studio, a weekly newsmagazine show and nightly news series on HBO, an in-house branded studio and a record label.

And Viceland’s troubles haven’t scared off investors. Last June, the company closed a $450 million from TPG to expand its content offerings worldwide.