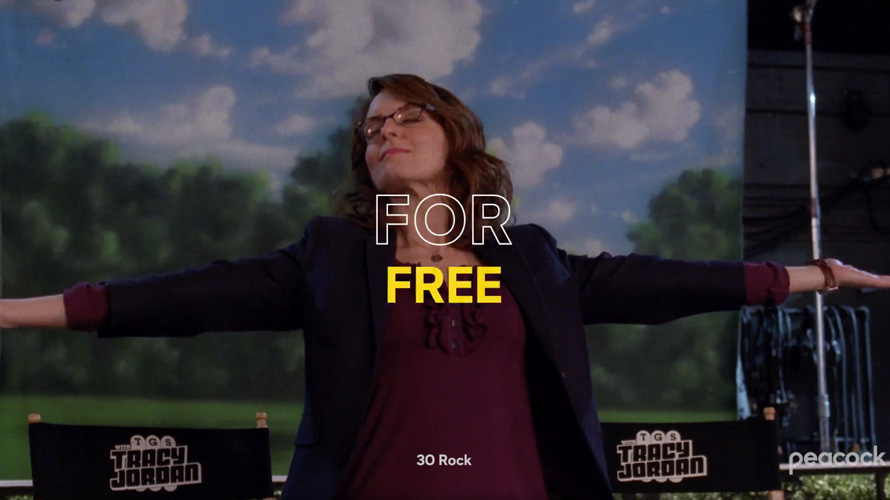 Peacock's new campaign emphasizes that much of its programming—including 30 Rock—will be available for free. Peacock

In advance of its new streaming service Peacock’s national debut in July, NBCUniversal is pushing out a big brand campaign with the hope of building excitement not only for its content, but the platform’s $0 starting price point.

A marketing campaign for the service, which kicked off this week, leans hard into the platform’s free, ad-supported tier. Ads are running on NBCUniversal-owned television stations as well as across digital and social, connected TV devices and off-platform linear and addressable.

The 60-second spots highlight the shows and stars that will comprise the streamer’s library, plus its biggest message—that it will have a free tier—is front-and-center. The spots end with a declaration: Viewers “can’t not watch” it.

The campaign, from agency Anomaly, will continue through this month and ramp up even more in the two weeks leading up to Peacock’s July 15 national premiere date in an effort to build excitement for a service that will land in a crowded and competitive streaming landscape. NBCUniversal is hoping Peacock will find sure footing in the future of ad-supported streaming television.

“When we’re coming to market late, you can’t come in and follow the same rulebook as everyone else,” said Alexandra Shapiro, evp of brand marketing and strategy at Peacock. “We knew we had to come out with a brand persona, a personality and a tone of voice that would punch above its weight and break through the clutter.”

Peacock’s debut, which comes after the spring premieres of streamers HBO Max and Quibi, was initially planned to occur just before the 2020 Summer Olympics, with the idea that the new platform would receive some hefty promotional muscle from the international competition. The Olympics have since been postponed due to the ongoing Covid-19 pandemic, meaning a major shift in marketing plans: In the two weeks prior to Peacock’s debut, promotional text will appear in lower-third graphics on NBCUniversal networks, Shapiro said.

The continued economic fallout from the coronavirus has had other effects on Peacock’s marketing, too. The spike in unemployment and dire economic situation prompted NBC to shift its messaging to prioritize the free tier even more than originally planned.

“The external factors of Covid-19 made us realize that ‘free’ was more potent than we could have imagined,” Shapiro said. “It made our value proposition—the fact that we have a premium and free tier—even more timely and compelling than it was even at its origin.”

"Covid-19 made us realize that 'free' was more potent than we could have imagined."
Alexandra Shapiro, evp of brand marketing and strategy, Peacock

NBCUniversal executives have emphasized that Peacock’s free tier is intended to serve as a “robust front porch” to the service, with 7,500 hours of movies, classics, current-season programming and samples of original shows. Peacock Premium, which contains 15,000 hours of content and full access to original programming, will cost $4.99 a month, but that tier will also be free for a number of viewers, including Comcast’s Xfinity customers and a wide net of partnerships that NBCUniversal is striking with television providers like Cox.

Peacock’s third tier will be ad-free tier and cost an additional $5 a month, meaning that ad-free viewing on Peacock will cost $4.99 or $9.99 monthly depending on whether subscribers receive Peacock Premium for free.

Widespread production shutdowns meant NBCUniversal talent weren’t available to film marketing materials on set. Because filming hadn’t yet started, the team dug into existing programming clips to piece together a tableau of the service’s programming offerings. The advertising copy uses free verse poetry to tie together the shows and characters with Peacock and its price point.

“When you know what you can’t do, it forces you to figure out what you need to do,” Shapiro said. “Everyone loves to do a shoot, but in this case, I don’t know if we could have beaten what we delivered. The external factors forced us to really focus on something that was distinct, ownable and flexible over time.”

To entice viewers to start watching free, Shapiro and the marketing team aimed to redefine how consumers think about what free meant to them. The team leaned into images of shows and movies that have broad audience appeal and are generally considered quality content.

“‘Free’ is a very powerful word, and it’s intoxicating, it’s motivating, but it can be fraught with skepticism,” Shapiro said. “People think, ‘Is there a hitch?’ ‘Free’ connotes sometimes that there’s not quality. We had to turn free on its head and make sure that free meant everything we know that it does, and that it means quality. How do you deliver that in a way where it doesn’t feel like a fire sale?”

Peacock isn’t the only streamer that’s had to rework marketing due to Covid-19. HBO Max also had to slash out-of-home spend and adjust messaging into a condensed marketing push amid the pandemic, while Quibi was forced to revamp its campaign to target at-home consumers instead of the flashy events and sports sponsorships that were originally in the cards.

Peacock, like those streamers, is using out-of home not as a heavy-lifter but as “fairy dust” to punctuate marketing messages, Shapiro said. Instead, Peacock is adjusting the bulk of its marketing spend on platforms where people are spending more time while sheltering in place. That marketing mix will shift as reopenings continue and consumers readjust their media habits again, Shapiro said.

Peacock has already been available to some U.S. customers since April, when the streaming service was rolled out across certain Xfinity devices. That ongoing beta has given NBCUniversal the chance to experiment with continued marketing messages to build interest in the service. While the company had considered moving up its July 15 launch in light of Covid-19, the service right now is on track to debut as planned.

The campaign rolling out this week will continue to accelerate in the coming weeks, and is the first iteration of many planned marketing efforts to get people watching Peacock. When production resumes, expect to see more traditional talent promotions and other marketing materials added to the Peacock promotional efforts.

“We think of this as a marathon, not a sprint,” Shapiro said. “This is not a one-and-done campaign.”