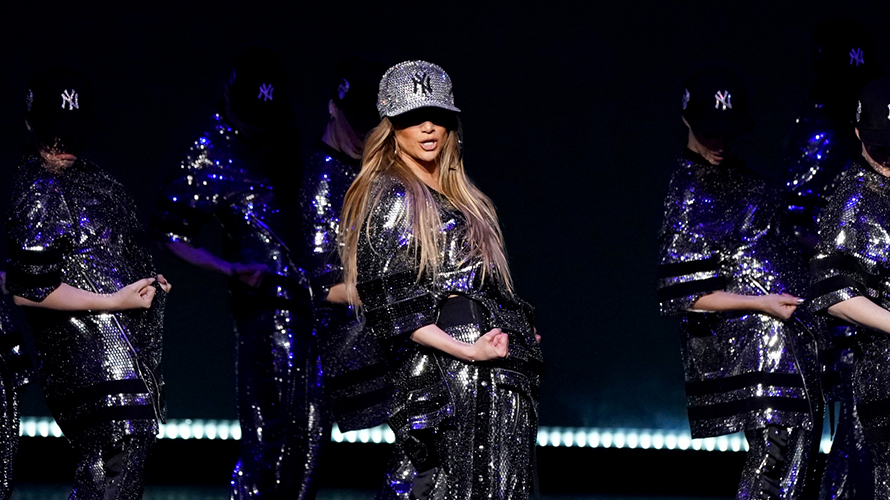 NBCUniversal closed out its upfront with a performance from Jennifer Lopez and her World of Dance colleagues. Virginia Sherwood/NBCUniversal

It wouldn’t be an NBCUniversal combined upfront without ad sales chief Linda Yaccarino taking aim at legacy metrics and the Facebooks and Googles of the world. While it took a little longer than usual for her to get onstage, she didn’t disappoint once she got there.

Yaccarino, the company’s chairman of advertising and client partnerships, didn’t make an appearance until about two hours into NBCUniversal’s annual event at New York’s Radio City Music Hall, following an amusing taped segment in which she appeared to be testifying in front of Congress, Mark Zuckerberg-style.

“Nothing brings people together like television,” she said to buyers, who were attending the first of this week’s broadcast upfront events. “Come on, no family has ever gathered around a news feed before.”

“Nothing brings people together like television. Come on, no family has ever gathered around a news feed before.”
NBCUniversal ad sales chief Linda Yaccarino

Referencing all the talent onstage and production numbers that NBCU had executed during the upfront (more on that below), Yaccarino noted: “When the social media guys can do that, let me know. But I wouldn’t hold your breath, because we’re not in the likes business—we’re in the results business. Real, verified results, delivered the right way.”

She talked about the benefits of working with clients to drive consumer engagement, as well as improving ad recall, brand affinity and purchase intent. “Those are the metrics that matter, not whatever a C3 tells you,” said Yaccarino. “I still cannot believe I have to get up this stage and talk about legacy measurement.”

When the C3 metric was created back in 2007, she said, everyone still had flip phones, and “Meghan Markle was on Deal Or No Deal.” As a modern alternative, she touted NBCU’s new CFlight unified advertising metric, which measures live, on-demand and time-shifted commercial impressions of episodes on every platform.

This upfront, NBCU will reduce ads by 10 percent in all its prime-time original series across its entire broadcast and cable portfolio (50-plus shows in total). It will also create a 60-second “prime pod” of audience-targeted advertising in the first or last breaks of all those shows.

Two hours before Yaccarino’s appearance, NBCUniversal president and CEO Steve Burke told the assembled buyers that the company would be shaking things up a bit for this year’s presentation. “What we’re going to try to do today is not just go through network by network,” he said. ” … [I]nstead, we’re going to celebrate all of our businesses together.” But then, oddly, much of the event proceeded just as it did last year, going through each network one at a time. (Burke also said in this turbulent time in the industry, “We feel like we already have the perfect set of assets to really thrive in this business,” which seems to run counter to the news that parent company Comcast is prepping a hostile bid for 20th Century Fox.)

E! talked about Busy Phillips’ new late-night talk show, Busy Tonight, and the return of E! True Hollywood Story this fall. Guiliana Rancic called it “what is sure to be everyone’s pick for the revival of 2018,” which would be news to ABC and the cast of Roseanne.

Syfy broadcasted trailers for new shows Deadly Class and Nightflyers, while Telemundo staged an emotional rendition of The Greatest Showman’s “This Is Me” to talk about the cultural power of the Hispanic audience. Andy Cohen announced that Project Runway will be returning to Bravo for Season 17 after spending the last decade on Lifetime.

“Journalism is at the heart of what we do. Facts do matter, and trust is earned.”
NBC Nightly News anchor Lester Holt

USA revealed its upcoming Suits spinoff starring Gina Torres will be called Suits: Second City and be set in “the dirty world of Chicago politics.” It also showed a sizzle reel for Treadstone, inspired by the Bourne franchise, which called it a “new series” even though USA has only ordered a pilot at this point.

NBC News’ stars took the stage as a unified group, with NBC Nightly News anchor Lester Holt talking about their “unparalleled team of journalists.” “Journalism is at the heart of what we do. Facts do matter, and trust is earned,” he stressed.

The members of the gold-medal-winning women’s Olympic hockey team received a standing ovation.

As the event stretched on, MVP Seth Meyers once again single-handedly energized the crowd with several barbs about his company and network.

“NBC had a huge year thanks to the Super Bowl and the Olympics, and I realize that’s a weird thing to bring up, because this year we don’t have either. It’s like a waiter coming over to tell you which specials they’re out of,” he said.

“NBC had a huge year thanks to the Super Bowl and the Olympics, and I realize that’s a weird thing to bring up, because this year we don’t have either. It’s like a waiter coming over to tell you which specials they’re out of.”
Seth Meyers
@jasonlynch jason.lynch@adweek.com Jason Lynch is TV/Media Editor at Adweek, overseeing trends, technology, personalities and programming across broadcast, cable and streaming video.