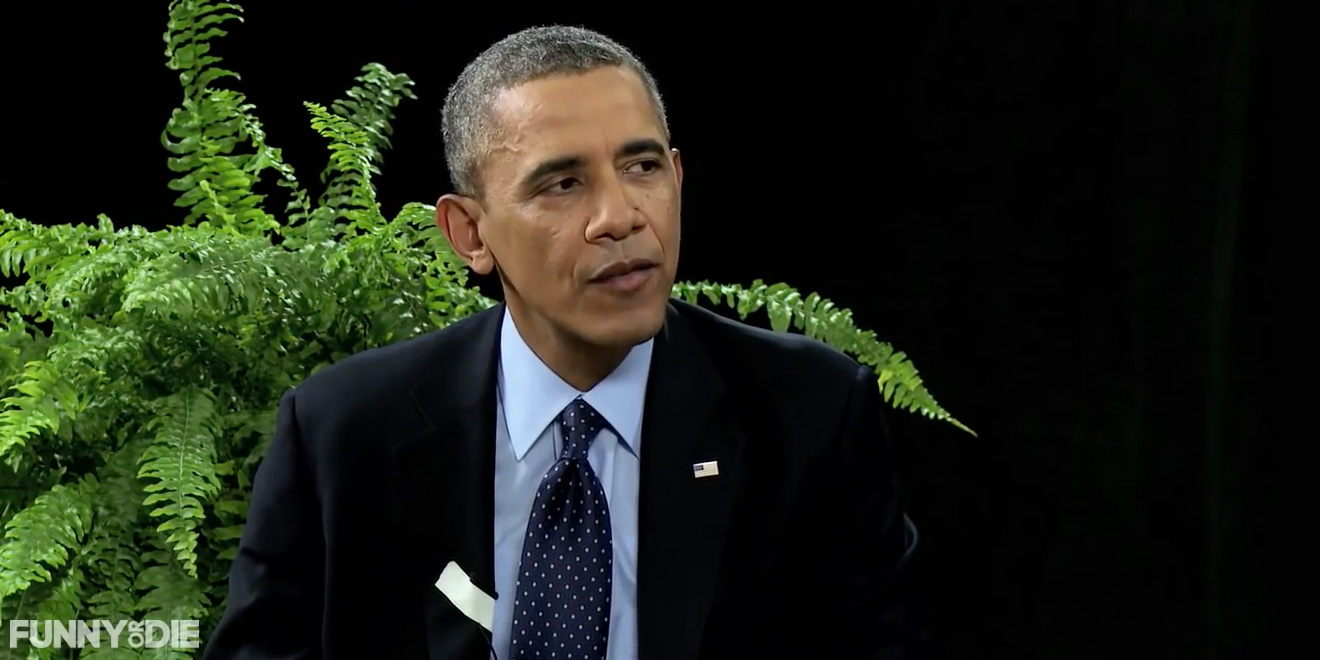 Yesterday, Funny Or Die turned 10 years old. Founded by Will Ferrell, along with comedy writing and directing veterans Adam McKay and Chris Henchy, FOD has been on a wild ride since the 2007 release of “The Landlord,” a short that featured McKay’s daughter as a caustic landlord demanding rent from a fearful Ferrell.

Branded content has been a big part of the FOD’s operation since nearly the very beginning, producing innovative and amusing advertising for brands big and small, as well as creative viral smashes like President Obama’s appearance on “Between Two Ferns” to promote Healthcare.gov.

Adweek asked Chris Bruss, president of digital at Funny Or Die and co-founder of FOD’s commercial production company Gifted Youth, to pick noteworthy branded videos from each of FOD’s 10 years in business—and tell us how they came together.

Check out his picks below.

This was the very first brand deal—or really, ad revenue deal—we ever did at FOD. August of 2007. Sony sponsored a sketch on Funny Or Die to promote their upcoming Superbad release. We would go on to make a ton of these “stunt” junket videos over the next decade. In fact, we just released our first ever 360 branded content video, which we shot for Disney at the Beauty & the Beast junket. In case you don’t recognize him, the smug British “journalist” in this Superbad video is the insanely talented filmmaker Edgar Wright, who would, of course, go on to direct Michael Cera in 2010’s Scott Pilgrim vs. the World. This video was the brainchild of Superbad producer Judd Apatow, who would become a Funny Or Die principal partner later in 2007.

Funny Or Die launched a seven-college comedy tour in early February 2008 in support of the theatrical release of Will Ferrell’s New Line Cinema comedy Semi-Pro. This video is just one of about two dozen videos shot on the road with Will and comedians Zach Galifianakis, Demetri Martin and Nick Swardson. Funny Or Die’s Adam McKay acted as emcee for the shows, and Funny Or Die’s up-and-coming director Jake Szymanski shot the backstage and from-the-road video content. Funny Or Die has produced many live events since then, including the well-known “Oddball Comedy Festival,” but this Semi-Pro tour was the first.

It's The Ass 'n Balls Show! from Will Ferrell

Sandra Bullock, Ryan Reynolds (and Betty White) Behind the Scenes of The Proposal

A year before her Snickers ad on the Super Bowl, this video showcased Betty White at her best—who knew she could be so irreverent!—and likely contributed to introducing her to a new generation of fans who would later champion and campaign for her to host SNL. Drew Antzis, who directed Funny Or Die’s “The Landlord,” shot and edited the sketch, with Anne Fletcher, director of The Proposal, directing.

Sandra Bullock & Ryan Reynolds: Behind the Scenes of The Proposal from Funny Or Die

In 2010, video game publishers really started to put massive marketing campaigns together for their biggest titles—at and above the level of what film studios were doing for their summer blockbusters. This video was Microsoft wanting to do something that would really makes some noise. They were very enthusiastic about the concept, and were great partners.

We shot LL Cool J and Zachary Levi on the same day, at the same location, in Los Angeles. The USC marching band—yes, that’s the real band—and other driveway/doorbell stuff was shot at a different house in L.A. on a different day. And then we shot both Snoop Dogg and Wayne Newton up in Vegas, but at two different locations. That’s actually Wayne’s real living room.

We knew Snoop and LL and Zach through various things, and Wayne had actually appeared in a small bit on our HBO television series Funny Or Die Presents. This video won a Webby Award for best branded entertainment content. And if that weren’t marketing enough, if you look closely, you can see subtle integrations, via T-shirts, for two other companies/brands: Boomdizzle, started by LL Cool J, and Nerd HQ, started by Zach Levi.

Back in 2011, this was one of the most successful “branded” videos we’d ever released. On the day of the launch, Harvey actually called to inquire about how it was doing, and we informed him that it was currently the second most-viewed branded video we’d ever launched. He plugged the video that night in an appearance on CNN’s Piers Morgan Live, which drove a bunch of views and put it in the No. 1 spot. The video ended up being recognized that year at The One Show Entertainment Awards.

In the fall of 2011, we rolled out a series of “local” commercials for Old Milwaukee beer starring Will Ferrell. We shot them in three small Midwest cities: Terre Haute, Ind., Davenport, Iowa, and of course, Milwaukee. And then we aired them only via small cable buys in the cities where they were shot. While we ultimately released over 30 spots, there were still a bunch left over after that campaign ran its course.

In January 2012, we heard a story on NPR about how large beer brands (Heineken, etc.) got around Anheuser-Busch’s exclusivity on Super Bowl TV spots by purchasing local spots in major markets (like New York and Los Angeles). This got us thinking: Are there local spots available during the Super Bowl in very small TV markets as well?

One spot that we had “left over” was one that was shot on the side of the road as we crossed the Indiana/Illinois border on our way from Terre Haute to Davenport. The sun was just setting over a field of soybeans, and director Jake Szymanski told us to pull over so we could try an idea he had been mulling over. Will turned his purple Lakers T-shirt inside out, and we did probably two or three takes of the slow walk/can catch before the sun dropped too far below the horizon and we had to call it a day.

That spot, while not actually shot in Nebraska, ended up airing in North Platte, Neb., on NBC affiliate KNOP-TV, during Super Bowl XLVI. The media spend for the 30 seconds of airtime was $550, and the spot went on to be one of the most talked about Super Bowl ads of the year—and maybe even of the last decade.

“Backseat Italians” has no major celebrity talent, and yet showcases Funny Or Die’s comic sensibilities and ability to use storytelling to tackle a brand’s goal. Our creative team came up with a way to get the message of a larger-size Fiat across in a way that played up some humorous tropes of Italians, without being offensive or inappropriate—in fact, the video did really well on Italian digital sites as well as here in the U.S. The video was done as part of Funny Or Die’s partnership with Turner Broadcasting, so portions of it were actually shown on TBS as well. The woman who plays the grandmother isn’t actually an actress—but we needed really authentic Italian speakers, and she was very funny. So funny, that we actually used her in another series of videos we made for Fiat the following year.

Cannes Lion, Clio, Emmy—this spot has garnered top awards, and Funny Or Die became the top referrer to Healthcare.gov when the video launched. It represented the first time the president, or any president, had appeared in an online video looking to reach and connect with a younger demographic. Following the success of this video, Funny Or Die opened a D.C. office, replicating what we do for brands with the private sector, advocacy organizations, political campaigns, as well as state and federal policymakers—producing breakthrough content for millions of Americans disengaged from the political process.

Between Two Ferns with Zach Galifianakis: President Barack Obama from Funny Or Die

This campaign, “Greg the Genie,” is a great example of how Funny Or Die’s relationship with talent, and expansive content universe, is invaluable to our clients and partners. When Slim Jim came to us, we had already been working with T.J. Miller and his team on our “Gorburger” TV series, so we were able to enlist the same team from that show to help create and execute these videos. The idea of T.J. Miller portraying a not-that-great “genie” came from Funny Or Die, but T.J. and his Gorburger team really conceptualized this great—and very blue—series. Funny Or Die has since gone on to produce TJ’s standup comedy special, TJ has gone on to perform at Funny Or Die’s Oddball Festival … and TJ and FOD came together again in the fall of 2016 for another round of “Greg the Genie” videos for Slim Jim.

Funny Or Die approaches every project as a unique opportunity, but “The Earliest Show” really is unlike anything we’ve ever done before. It was developed very similarly to how we develop our TV shows, and was a true collaboration between FOD, writer/director/star Ben Schwartz, and the brand—Cap’n Crunch.

FOD came up with the initial idea of a traditional morning show set in the middle of the night, inspired by Cap’n Crunch’s insight that lots of millennial-aged men were consuming Crunch not during breakfast but as a late night snack. When Ben came on board, he brought with him this amazing story arc, the idea that our host character gets dumped by his girlfriend on live TV in episode 1, and then progresses through the five stages of grief in each subsequent episode—denial, anger, bargaining, depression, acceptance.

The series, which was mostly improvised, was rounded out with an amazing cast, including Lauren Lapkus and Joe Hartzler, and guests like Jake Johnson, Reggie Watts and Thomas Middleditch.

Jake Johnson Joins The Earliest Show And Things Get Real from Jake Johnson
@nudd Tim Nudd is a former creative editor of Adweek.