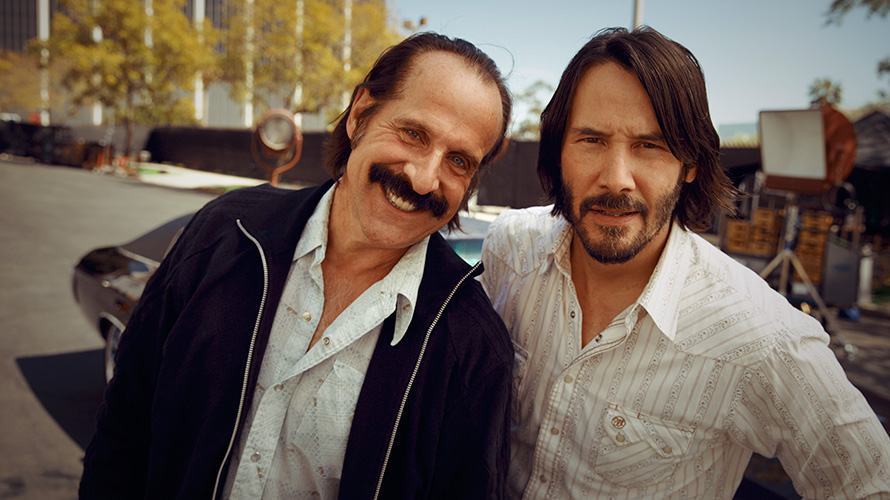 Keanu Reeves enjoyed his recurring role in Season 1 of Swedish Dicks so much, he'll likely appear in the entire second season. Pop

Pop, which targets “modern grown-ups” in their 30s and 40s who are nostalgic for ’90s programming and stars, has landed its biggest ’90s celebrity yet as part of its new upfront slate—Keanu Reeves.

The actor, who starred in ’90s hits like Speed, Point Break and The Matrix, and made a comeback with the John Wick films, appears in one of the network’s new shows, Swedish Dicks. Airing this fall, the comedy stars Peter Stormare as an ex-stuntman who teams up with a Swedish DJ to work as private investigators in L.A. Reeves plays Stormare’s former stuntman colleague, who was thought to have died long ago in a stunt accident but is revealed to be alive, and a secret agent. (Reeves and Stormare are longtime friends who appeared together in Constantine and John Wick: Chapter 2.)

“Getting Keanu Reeves on TV is a really big deal,” said Pop president Brad Schwartz, in an upfront press briefing held in between the company’s upfront meetings with agencies. While Reeves appears in six of the first season’s 10 episodes, “he’s had so much fun doing it, that he’s going to be in every episode of Season 2,” which has already been ordered and will film this summer, said Schwartz. (UPDATE: Pop later said that the actor’s Season 2 deal is still being finalized.)

In addition to its coup with Reeves, Pop is making noise this upfront by acquiring off-net rights to the ABC sitcom The Goldbergs and branching into scripted drama for the first time.

Bringing The Goldbergs to the network this fall “is a very big move for us, and shows us competing with the big guys” to land in a first-run, off-net sitcom, Schwartz said. “Here’s a chance to take a swing. It’s a great match with some of our movies, and it’s a great thing to promote a lot of our comedies out of. If we’re in the comedy game, it’s good to have some other comedies to promote out of.”

The network also recently began airing ER, which fits alongside some of the other shows Pop has acquired that “bring back warm feelings” like The O.C. and Beverly Hills, 90120, Schwartz said, adding that the medical drama is not available on any streaming sites like Netflix or Hulu. “We’re the only place you can find it.”

While most of Pop’s acquired shows are dramas, its original series lineup until now has been exclusively comedies. But the network is branching out into drama for the first time with Clique, a show about two childhood friends who head off to the same college, where one of them falls in with an elite crew of girls. The show, which was developed for BBC Three, will air in 2017. It’s already been renewed for Season 2, with Pop on board as a co-producer.

“We felt like we had to have it because it’s so bold and provocative, and it felt like we could capitalize on our fanbase that showed up for our soapy acquisitions,” said Justin Rosenblatt, evp, original programming and development. “It was a good gamble.”

Schwartz said the network, which is developing other dramas as well, will build a separate night of programming around that genre, separate from its Wednesday night comedy block.

Pop’s other new comedies include Hot Date, a sketch comedy series premiering this fall from CollegeHumor and executive produced by Will Arnett. Each episode features several different characters and takes place over a single night.

And Nightcap, which stars Ali Wentworth and takes place behind the scenes at a late-night talk show, returns for Season 2 on June 7 and features guest stars like Alec Baldwin, Julianna Marguiles, Julianne Moore and J.J. Abrams.

Schwartz said that Schitt’s Creek, which stars Eugene Levy and Catherine O’Hara and will return for Season 4 next January, helped move the former TV Guide Network into premium content after its big rebrand two years ago. “[Now], we’re no longer doing inexpensive reality stuff with people you’ve never heard of,” he said.

In its upfront pitch, Pop is touting its double-digit total day growth among adults 18 to 49 (22 percent in C3, total day), while ratings have fallen for competitors like Oxygen, Lifetime and Bravo. Last season, the network added 58 new advertisers.

Michael DuPont, evp, ad sales, said Pop offers brands a “relatively low cost of entry to do things like added value sponsorships or custom integrations.” Even if advertisers want to partner with a show that isn’t currently airing new episodes, DuPont will find a way. Last year, Zillow enlisted Schitt’s Creek’s Daniel Levy to write and produce a segment for the company featuring himself and co-star Annie Murphy. “It looked like it was part of the show,” said DuPont.