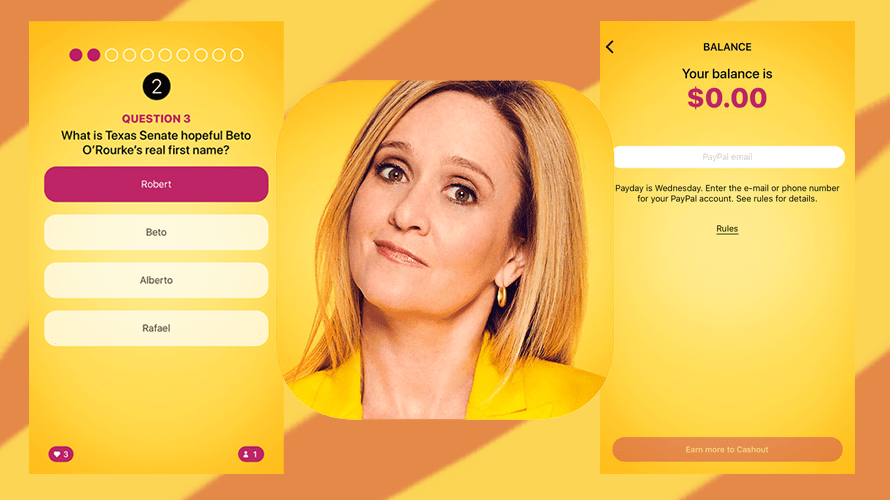 You could (theoretically) win $5,000 via Samantha Bee's trivia game. TBS

Beginning Sept. 12, Samantha Bee will offer a $5,000 cash prize every day to those who play her new trivia game.

This Is Not a Game: the Game is inspired by a Bee segment that showed how games could entice people to do things they might not otherwise be inclined to do. The TBS crew decided to see if they could use the game to get people to register to vote.

“Can we gamify the midterms? Is it possible? Is it legal? Is it fun?” Bee told reporters at a media event to preview the app. “It felt like somebody should try to do something.”

Full Frontal With Samantha Bee’s internal research showed that only 52 percent of its audience is registered to vote.

The game’s questions are politically themed (think history and current events) and include jokes in the same tone you might hear from Bee, who described the game as a “real bipartisan experience.”

“Somehow, we’ve captured the voice of the show,” Bee said. “But we’ve done it so we could make fun of everyone as appropriately as possible.”

Designed to run up to the midterm elections, the app will give you extra lives if you do things like check to make sure you voted and share the app with friends.

At the press event on Wednesday, Bee mingled with reporters, getting advice on the app after they played a round. The theme of registering to vote was carried through to the event space, which had the paperwork to start the process and snacks from swing states (like Ohio buckeyes, Wisconsin cheese curds and Florida lime pie).

Similar to HQ, Bee’s game is easy to use and doesn’t have many graphics or other attention grabs. It has gone through several iterations, losing a wheel and other activities in favor of a more “stupid” easy-to-use experience for fans, said Full Frontal field producer Razan Ghalayini.

Though the app is able to support ads, it has launched without them. The app is live for download, and Bee will tease it on an upcoming September show.