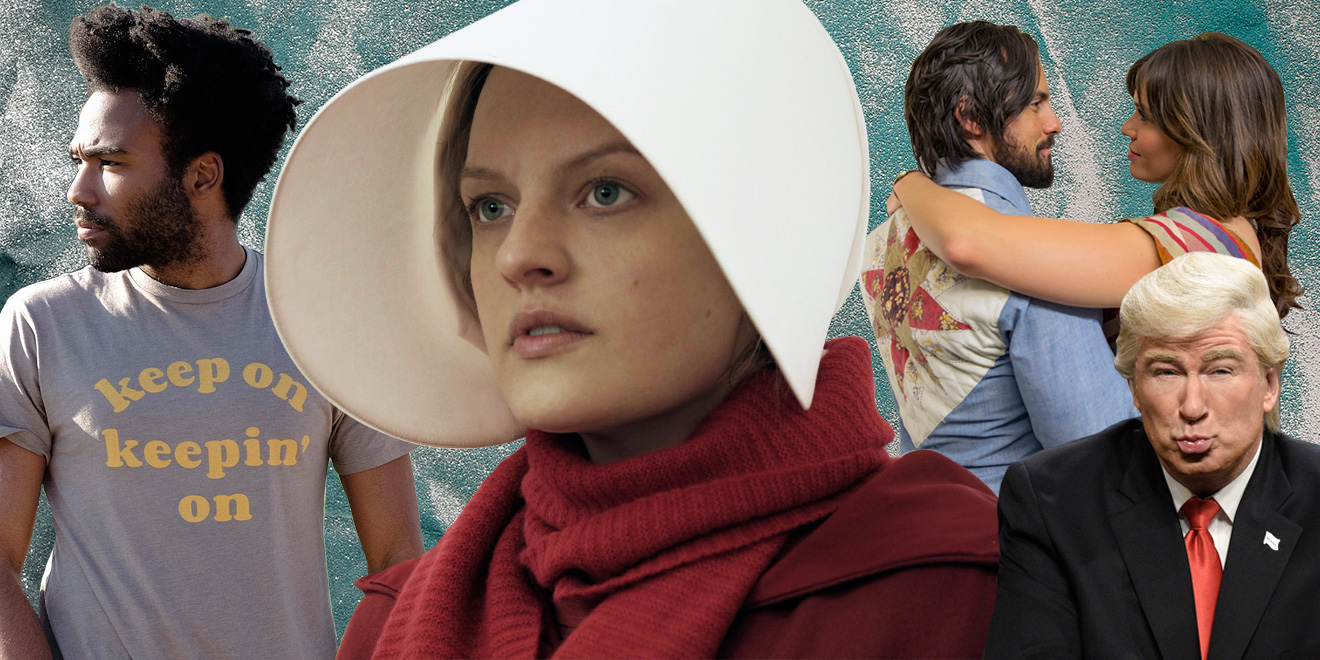 Thanks to Peak TV, there are more scripted series than ever—with around 450 expected to air this year—making it seemingly next-to-impossible for new shows to make a splash with overwhelmed audiences.

But that didn’t stop an impressively large number of first-year programs—including shows like This Is Us and The Handmaid’s Tale, which shook up the industry over the past year—from storming The 69th Emmy Awards, as nominations were announced today.

Of the new series, HBO’s Westworld led the pack with 22 nominations, followed by Stranger Things with 18, and The Crown and The Handmaid’s Tale with 13 each (the tally for Handmaid’s included a nomination for Elisabeth Moss, who might be the best thing that ever happened to Hulu). This Is Us—Adweek’s show of the year—also scored double-digits nods, with 11, and became the first broadcast series to land a best drama nomination since The Good Wife six years ago, in 2011. (It wasn’t all about the freshman however: Julia Louis-Dreyfus’ Veep racked up 17 nominations in all.)

Adweek already looked at this year’s outstanding commercial nominees; here’s our big takeaways from the rest of this year’s Emmy lineup (the full list of nominees can be found here).

It’s good to be the new kid on the block

There was a time when Emmy voters would sometimes take several seasons before allowing shows to have a seat at the table (looking at you, The Americans). But five of the seven nominees for outstanding drama series were first-year shows: The Crown, The Handmaid’s Tale, Stranger Things, This Is Us and Westworld. (Better Call Saul and, sigh, House of Cards, rounded out the category.)

However, this year’s shiny new toy could easily became next year’s discarded plaything. Mr. Robot, which roared onto the scene with six nominations last year—and star Rami Malek ultimately won for best actor in a drama—nabbed just three small nominations this year, with nothing for Malek.

The premium network, which has now led all networks in Emmy nominations for 17 straight years, was expected to have a down year, given that Game of Thrones, which had 23 nominations in 2016, was ineligible (Season 7 starts Sunday). Instead, the network increased its tally from 94 to 111 this year, thanks to Westworld (22), Veep (17), Big Little Lies (16), The Night Of (13), Silicon Valley (10) and Last Week Tonight with John Oliver (8).

With FX dipping slightly this year (from 56 to 55), the network with the best shot at challenging HBO’s Emmy supremacy looks to be Netflix. The streaming service jumped from 54 nominations in 2016 to a whopping 91 this year, led by Stranger Things (18), The Crown (13) and Master of None (8). As the network continues to expand its programming slate, it could finally catch up to the Big Network on Campus within the next year or two.

Despite Netflix’s surge, Hulu might have had even more reason to celebrate today. The streaming service, which had just 2 nominations last year, walked away with 18 nods in total, 13 of which went to The Handmaid’s Tale. Hulu’s tally even surpassed Amazon’s, which treaded water with the same number of nominations (16) as last year.

(On the broadcast side, NBC increased from 41 nominations in 2016 to 64 this year thanks largely to This Is Us. Other networks lagged far behind: ABC had 34 nominations, CBS had 29 and Fox had 21.)

The Emmys giveth, and the Emmys taketh away

While Emmy voters got their nominations mostly right last year, they weren’t quite as successful this time around, with far too many great series left out of major nominations, if they weren’t snubbed entirely.

At the top of this year’s Emmy snub list is HBO’s spectacular final season of The Leftovers, which saw superb work by stars Justin Theroux and Carrie Coon go unrecognized (Coon did receive a nomination for Fargo, where she was also terrific, but her Leftovers turn was the only performance in the same stratosphere as Elisabeth Moss’ Handmaid’s Tale turn this year).

Another of the year’s best performances belonged to Michael McKean, whose devastating work on this season of Better Call Saul is one of the year’s most egregious Emmy oversights.

The Good Fight, CBS All Access’ Good Wife spinoff, was a worthy successor to the original series, and while Christine Baranski and Carrie Preston’s work is every bit as good as it was on The Good Wife, where both received recognition from Emmy voters, neither one landed a nomination.

On the comedy side, Amazon’s Fleabag and HBO’s Insecure both had memorable debuts; hopefully Emmy voters will warm to them in subsequent years. But this was the end of the line for Girls, whose confident final season landed only minor nominations. And BoJack Horseman, whose Fish Out of Water episode was last year’s single best episode, was also overlooked.

Last year, Colbert was the odd man out among the outstanding variety talk series, while Full Frontal with Samantha Bee had to settle for a writing nomination. But both shows rode their Trump-fueled momentum to variety talk series nominations this year, ousting The Tonight Show with Jimmy Fallon. (It’s a pity there also wasn’t room for Late Night with Seth Meyers, whose A Closer Look segment is the most essential 10 minutes in late-night.)

Nothing tiny about miniseries

Once again, the miniseries/limited series category will feature some of the fiercest Emmy competition, with several shows scoring double-digit nominees: The Night Of (13), Feud: Bette and Joan (19), Big Little Lies (16) and Fargo (16). And many of those stars will be facing off against one another in acting categories. The Night Of’s John Turturro and Riz Ahmed will both compete as lead actor, while Feud’s Jessica Lange and Susan Sarandon each received lead actress nominations, alongside Big Little Lies’ Nicole Kidman and Reese Witherspoon.

Time to clean out the cobwebs

Despite the influx of new series, some Emmy voters just can’t quit certain shows that are well past their prime, and are no longer Emmy-worthy. House of Cards still ended up with 6 nominations, including for drama series and stars Kevin Spacey and Robin Wright. Meanwhile, Modern Family received its eighth consecutive comedy series nomination, which means that shows like Catastrophe, Better Things, Insecure, Girls and Speechless were stuck on the outside looking in. Both of those shows have overstayed their Emmy welcome and need to make way for new contenders, like the ones listed above.