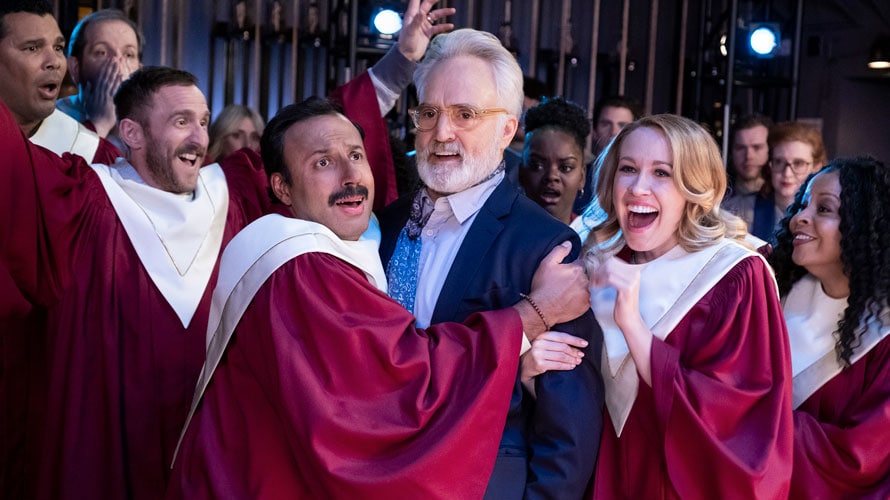 NBC's Perfect Harmony was among the most interesting trailers screened for buyers during upfronts week. Justin Lubin/NBC

During the just-wrapped upfronts week, the only thing more plentiful than the postshow cocktails were trailers. Every presentation featured several sizzle reels for new (and some returning) series, with buyers seeing more than 50 of them over the course of the week.

Many trailers fell into the “perfectly average” category, but several did manage to stand out. The actual shows they are promoting might not live up to their clever marketing campaigns, but these 10 upfronts week trailers had us most eager to see the rest of their respective pilots:

Given that this is The CW’s sixth superhero series, the network could have just gone through the usual origin-story motions. But this trailer, showcasing Kate Kane’s (played by Ruby Rose) complicated backstory and evolution into Batwoman, stepping in for an MIA Batman to fight crime in Gotham, promises a show that is different from any other on the network—and not just because this is the first live-action series centered around an LGBTQ superhero. When told the Batsuit is “literal perfection,” Rose’s Kane replies, without missing a beat, “It will be … when it fits a woman.”

Fox’s Beverly Hills, 90210 semirevival—the original cast members minus Luke Perry, who died tragically in March, play heightened versions of themselves as they consider reviving the series that made them all stars—finds the perfect nostalgic hook: the eight notes that make up the show’s iconic theme song, which each actor encounters in unexpected places. Aug. 7 can’t get here fast enough.

TBS will soon begin airing dramas as WarnerMedia starts blurring the brands of several networks, but this new series, in which SNL alum Nasim Pedrad, who created the show and is co-showrunner, plays a 14-year-old Persian boy in his first year of high school, is squarely in the network’s comedy wheelhouse.

The Good Wife and The Good Fight creators Michelle and Robert King return to broadcast TV with an X-Files-esque show about a skeptical female psychologist who teams up with a priest-in-training and a carpenter to investigate the Church’s backlog of unexplained mysteries. It’s the week’s creepiest trailer (what’s at the foot of the bed?) and also the most compelling one for any freshman broadcast series debuting this fall.

With Empire ending next season, Fox might have found its next addictive soap opera with this story about a uberwealthy family who, after their conservative icon patriarch dies unexpectedly, learns that he has three illegitimate offspring, each of whom was written into his will. The trailer has everything you’d want in a sudsy drama: face slaps, whispered threats, passive-aggressive banter and Kim Cattrall uttering the line, “I’ve dealt with a lot of bastards to get where I am, and these three will be no different!”

This 10-part documentary focusing on Michael Jordan’s final championship season with the Chicago Bulls (1997-98) looks sensational—must-see viewing for sports fans and packed with drama that is every bit as juicy as any scripted series unveiled this week. The exact spot ESPN aired during the Disney upfront hasn’t been released online yet, but this earlier trailer touches on many of the same themes.

This Black-ish spinoff follows the childhood of Rainbow Johnson (played on Black-ish by Tracee Ellis Ross, who narrates the trailer), whose commune life is upended by the ATF—turns out her family was part of a “radicalized cult”—which means she and her siblings must join a regular community (and attend school) for the first time. The ‘80s-heavy soundtrack and a Black-ish-like mix of humor and heart lay the groundwork for a promising spinoff.

Bradley Whitford is a washed-up music professor who gets a new lease on life when he tries to whip a small church choir into shape. It will be an ensemble comedy, but Whitford does all the heavy lifting in the trailer, selling the premise and the character. The trailer hit all the right notes, and kudos to the bleeping funny last line of dialogue.

Justified’s Walton Goggins might not be the first person you’d expect to star in a CBS comedy, but he’s impressive in the trailer for this comedy about a man trying to get back in the dating world a year after the death of his wife. His winning personality, and those of costars Rob Corddry and Michaeala Watkins, who play his married friends, could take this show a long way.

NBC is keeping one of the week’s best spots under wraps—it didn’t release trailers for any midseason shows—but this drama looks like a winner: Suburgatory’s Jane Levy is a computer coder who suddenly begins hearing the innermost thoughts of the people around her as they start breaking into song (the trailer includes “All By Myself,” “Help,” “I Think I Love You” and “True Colors”). It’s the biggest swing among broadcasters this season and a high-concept show that will probably turn out either great or terrible with no in between. But for now, we’re all in.