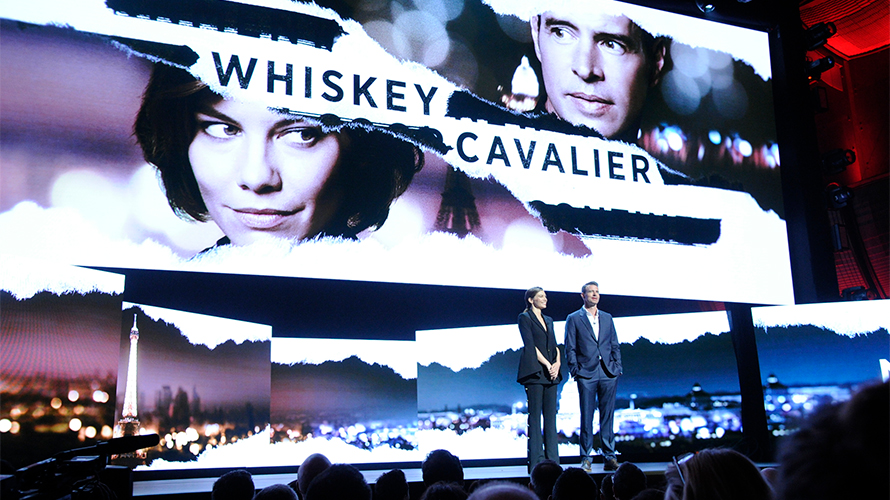 Another upfront week has come and gone, and while buyers had a more muted response than usual as the broadcast networks unveiled next season’s slates, there was still plenty for them to talk about amidst all the onstage spinning and offstage drinking.

Before the upfront negotiations begin, let’s take one last look back at the week’s 10 most memorable moments, compiled by me and the rest of the Adweek TV team. If you missed any of Adweek’s comprehensive upfront coverage, you can find it here.

As his company kicked off the week’s upfront festivities, NBCUniversal president and CEO Steve Burke proclaimed that they were shaking things up for this year’s presentation. “What we’re going to try to do today is not just go through network by network. … Instead, we’re going to celebrate all of our businesses together.”

But what followed over the next two-plus hours was exactly the kind of presentation that Burke had just promised to avoid, with each of the company’s many networks taking its allotted turn onstage. That was a harbinger for the rest of the week, as buyers were often promised innovative new shows, but ultimately some of them appeared indistinguishable from the ones that had just been canceled.

An upfront pitch is very much like running for political office: Networks make grand promises about all the big things in store next season while avoiding any concrete commitments that could come back to bite them. But Fox Television Group chairmen and CEOs Dana Walden and Gary Newman made some surprisingly specific predictions about how the network would fare this fall with the addition of Thursday Night Football: Its 18–49 demo rating will increase by “double-digits,” and Fox’s percentage of “real-time consumption of our content this fall” (i.e., live viewing) will grow to 82 percent. Then Tim Allen went one better, declaring that his show Last Man Standing, which Fox revived after ABC canceled it last year, will bring “literally 8 million of the most passionate and appreciative fans” to Fox on Fridays this fall. If the network stumbles this fall, those lofty public promises will loom large.

Another eyebrow-raising moment during Fox’s presentation occurred as the network’s onstage talent like Jamie Foxx and Diddy kept trying to get network executives to dance, without much luck. “I think we’ve established today that executives cannot dance,” joked Walden at one point, which prompted this off-hand remark from Diddy: “Next upfront, you’ll be dancing.” The comment reminded several people in the audience that Walden’s future at Fox is very much in question given the looming Disney-Fox deal—and while she (and some of the company’s other top execs) could indeed be dancing on an upfront stage next year, it might not be Fox’s.

While NBCU’s Spanish-language network got a few minutes on stage at Radio City Music Hall Monday morning, the network had its own musically-infused concert for buyers Monday night. The Park Avenue Armory played host to chart-topping Colombian reggaeton singer J Balvin, who was up early the next morning performing on Good Morning America. Before his set, and after an acrobatics performance set to a backdrop of some of Telemundo’s new shows, network chairman Cesar Conde told buyers why his network is the right bet for their buy. —Chris Ariens

The Worldwide Leader in Sports has experienced a difficult few months, highlighted by the chaotic exit of former ESPN president John Skipper. But new president Jimmy Pitaro did a nice job steering the annual upfront ship last Tuesday, sticking to the script and reporting the positives, including social media growth, ratings growth for its NBA on ESPN franchise and a number one ranking primetime among younger audiences. And, of course, it’s not a true ESPN upfront without a wacky cameo from Kenny Mayne. The longtime ESPN personality performed his annual comedy bits throughout the presentation, at one point saying, “I’m sick of this shit just as much as you all are,” which elicited lots of laughs from a packed Minskoff Theater. —A.J. Katz

Even as America’s leading Spanish-language network finds itself in the midst of a business review, Univision brought ad buyers to TriBeCa, taking over five floors of event space in Spring Studios. “We’re in the hip district not the theater district,” said CRO Tonia O’Connor. The network’s experiential upfront allowed buyers to sit in the cockpit of a flight simulator, for new show La Piloto, walk through a raucous tunnel and onto the field of a Mexico City soccer stadium to experience what it calls “the beautiful game” and have a haiku written for them to promote new drama Tijuana. After a brief 30-minute pitch by execs, buyers then ascended to the rooftop for drinks and bites. —C.A.

Jimmy Kimmel made a welcome return to his brutal-yet-hilarious upfront roast after skipping last year’s presentation due to his son’s heart surgery. But the people behind the network’s midseason drama Whiskey Cavalier probably wished Kimmel had stayed in L.A. after the comedian’s withering takedown of the show’s silly moniker (“We finally came up with a title worse than Cougar Town!”) and premise (“Should we cancel it now?”). Minutes later, when the title flashed onscreen during president Channing Dungey’s midseason pitch, the audience burst out laughing—with more gusto than any comedy trailer had elicited from them to that point. It will be hard for any buyer who saw Kimmel’s withering act to take that show seriously, so ABC might want to consider a title change.

The Turner networks wrapped their upfront with raps: Daveed Diggs (who has a show on TNT) began the morning with the rhyme Tell Me a Story, while Snoop Dogg (who hosts a game show on TBS) ended the show with several of his early hits. In between, buyers got to watch Shaquille O’Neal play goalie (promoting Turner Sports’ UEFA Champion League games), and Conan O’Brien delivered his heartfelt gratitude marking 25 years in the business, until he added, “I look forward to seeing you next year when I walk this shit back.” —C.A.

“So, how’s your week been?” There wasn’t a single upfront trailer that was received as warmly as CBS Corp. chairman and CEO Leslie Moonves was when he appeared onstage at Carnegie Hall, two days after the company ignited a legal battle with majority owners Sumner and Shari Redstone over control of CBS’ future. The executive entered to a standing ovation—the first time in recent memory that a TV executive has received one during an upfront event—making it clear that Madison Avenue is Team Les.

After a week of presentations that frequently came close to, and sometimes blew right past, the two-hour mark, The CW blessedly kept its event to under an hour. But the network also took the time to make a big statement in expanded its programming to Sunday nights, with a slate that includes more scripted hours this fall than NBC, ABC and Fox. “We do believe in broadcasting,” said network president Mark Pedowitz, which was an optimistic note to end the week on.