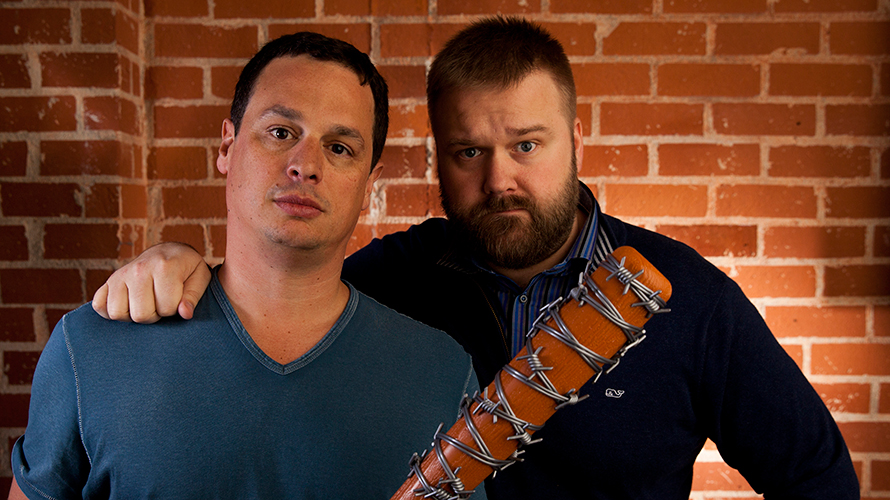 A conversation between Robert Kirkman, author of The Walking Dead comics, and his longtime producing and business partner, David Alpert, sounds like an improv routine. You’re on the edge of your seat listening to them finish each other’s sentences, and the discussion is beyond lively—it’s electrifying.

After working with each other for more than 20 years, it’s clear the pair is still having fun. They’ve taken that energy to the production and distribution company they co-founded, Skybound Entertainment, where they have a slew of projects already developed and in the works.

Kirkman and Alpert met at a comic book convention, where they became friends and business partners, going on to produce an animated show centered around Kirkman’s self-published comic book, Battle Pope.

“There’s a similar entrepreneurial mode from both of us,” said Alpert, CEO of Skybound. “We connected because we saw the world the same way. You want something, go out and do it.”

The partnership led them to co-founding Skybound Entertainment, a multiplatform entertainment company built on supporting and empowering creators, and to working on The Walking Dead TV series, for which Alpert and Kirkman are executive producers. The key to success, they say, is to keep creating.

“You’re never going to learn how to open a parachute faster than while you’re falling out of an airplane. Whatever endeavor you’re trying to accomplish … just figure out the shortest path to do it and sacrifice all other aspects of your life to make it work,” said Kirkman, chairman of Skybound, with a laugh.

They use that same driven, learn-as-you-go approach at Skybound. What started as a company in Alpert’s old office has grown to include about 80 staffers.

Figuring out how to “find the hills in the distance” and achieve their goals involves “details, details,” Kirkman said.

“Generally, Robert comes up with some crazy idea,” Alpert said. “I say, ‘I don’t know what that is!’ He goes, ‘Doesn’t matter, let’s figure out what it is.’ I think there’s probably a better method than banging your head against the wall … but we’ve yet to find it.”

Founded in 2010, Skybound Entertainment has expanded to include about 80 staffers and into Canada. Its projects include 12 books in active publication and over 20 in development for Skybound Comics; five TV shows in production and 32 TV projects in development; 11 films active at the studio level and 16 film projects under development; as well as 12 products in the market and 13 games in development.

“The most important thing is to continue to create,” said Alpert. “That consistency and persistence leads to success. People get better with time. The more you do, the better off you’ll be.”

As for Kirkman? “My advice is always terrible.” (Alpert added, “I agree with that, by the way,” to which Kirkman said, “It’s true.”)