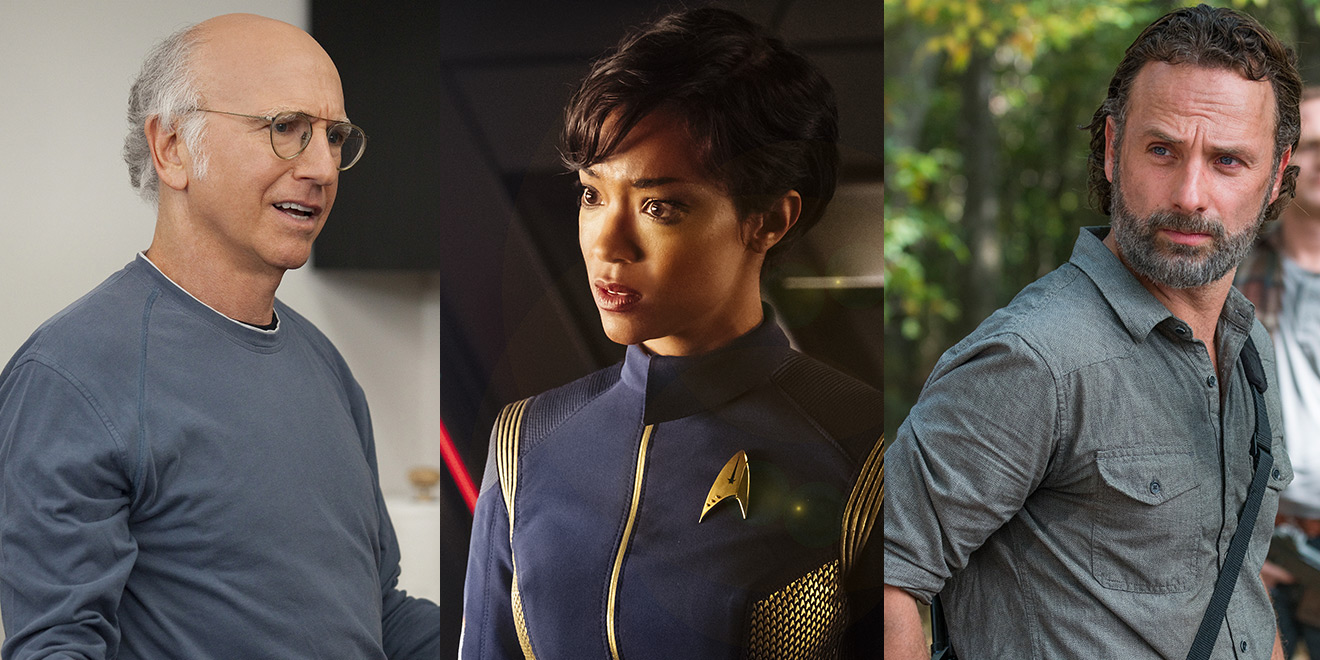 Curb Your Enthusiasm, Star Trek: Discovery and The Walking Dead will all face TV journalists. HBO, CBS All Access, AMC

Now that the networks have completed their upfront business, the TV industry is turning its attention to summer’s other major event: the Television Critics Association’s summer press tour, which kicks off Tuesday at the Beverly Hilton in L.A.

During the semiannual event (there’s also winter press tour, which is held each January), more than 200 television journalists and critics will gather for 16 days of panels, set visits and receptions, as dozens of broadcast, cable and streaming outlets present more than 100 panels featuring talent and producers from their new—and sometimes returning—programs and execs talk about their network’s vision. (Adweek, as always, will be filing stories extensively throughout.)

The TCA press tour has always been a place where the industry makes news. FX Networks CEO John Langraf coined the phrase “peak TV,” Kevin Reilly unveiled his overhaul of TNT and TBS (complete with a 50 percent ad-load reduction for TNT), NBC trigged a war with Netflix after sharing ratings data for the secretive streaming service and Donald Trump lied, repeatedly, about the ratings for Celebrity Apprentice. And at least once each press tour, a session goes completely off the rails, as was the case last summer when Glenn Geller, who was then CBS Entertainment president, came under fire for the lack of diversity in his network’s fall slate.

As networks battle for the attention of viewers and TV journalists in the era of (thanks, Landgraf!) peak TV, the TCA press tour is a make-or-break moment. All of the 40 or so outlets participating will be under the microscope, but none more so than these six, which have the most to gain, or lose, depending on how their sessions shake out:

Casey Bloys had hoped for a strong TCA debut last summer as HBO’s new programming chief. Instead, he struggled to defend the sexualized violence of women in shows like Game of Thrones, The Night Of and Westworld. But after that early stumble, Bloys has been soaring—in just the past few weeks, HBO nabbed 111 Emmy nominations, the most of any network for the 17th year in a row, while Game of Thrones’ premiere drew a record-breaking 16.1 million viewers on its first night alone. And with Curb Your Enthusiasm returning this fall, Bloys was preparing to take a well-deserved victory lap at TCA. Instead, he might be back on his heels again, after last week’s news that the (white) creators of Thrones will be tackling a new drama set in an alternate America, where slavery continues in the South. The backlash has already been fierce, and Bloys will have to defend the network’s creative decisions better than he did a year ago.

Like HBO, CBS is looking for redemption after last summer’s exec session with Geller quickly unraveled. This time, new CBS Entertainment president Kelly Kahl will be on the hot seat, with his own potential controversy to handle: While CBS’s fall lineup is more diverse than last year’s, its freshman series all feature male stars. Les Moonves was able to downplay the all-male lineup in May (“We think our track record is OK,” he told reporters), but Kahl won’t get off so easily.

During the winter press tour, it was evident that Hulu had something extraordinary with its new drama, The Handmaid’s Tale, which went on to land 13 nominations, including the streaming service’s first-ever drama series nomination. But now, Hulu has to prove that Handmaid’s wasn’t a fluke as it rolls out its slate for the rest of the year, which includes time-travel comedy Future Man and Marvel’s Runaways, one of three new Marvel series debuting on TV this fall. With Amazon and Netflix sitting out a second straight press tour and foregoing all that media attention, it’s Hulu’s time to shine—perhaps.

The network is bringing The Walking Dead—which despite its Season 7 ratings erosion, remains TV’s No. 1 series in the 18-49 demo—back to the press tour for the first time in four and a half years. But the network and the show’s producers will undoubtedly have to field questions about the recent release of explosive emails as part of ousted co-creator Frank Darabont’s bitter lawsuit with AMC, as well as the tragic death earlier this month of Walking Dead stuntman John Bernecker after an on-set accident. Beyond current events, producers will also be expected to address how much more life is left in Dead and whether they’ve decided on an endgame.

Just days after the series finale of Bates Motel aired in April, the network announced it was throwing in the towel on scripted and pivoting entirely into unscripted. Then on Thursday, parent company A+E Networks made even bigger shifts, elevating Rob Sharenow, who had previously overseen A&E and Lifetime, to president of programming for A+E Networks’ entire portfolio. What does it all mean, and what happens now? This will be the network’s first opportunity to explain.

While CBS has some minefields to navigate this press tour, its sister subscription streaming service is also facing a big one of its own, with the upcoming debut of Star Trek: Discovery. The series’ September debut is a make-or-break moment for the streaming service, which has been preparing for this for almost two years. Given the rabid Star Trek fan base, if this show can’t convince people to fork over $6 a month for CBS All Access, nothing will. Buyers were enthusiastic about the first footage screened during May’s upfront, but it will take more than a sizzle reel to impress TCA journalists.