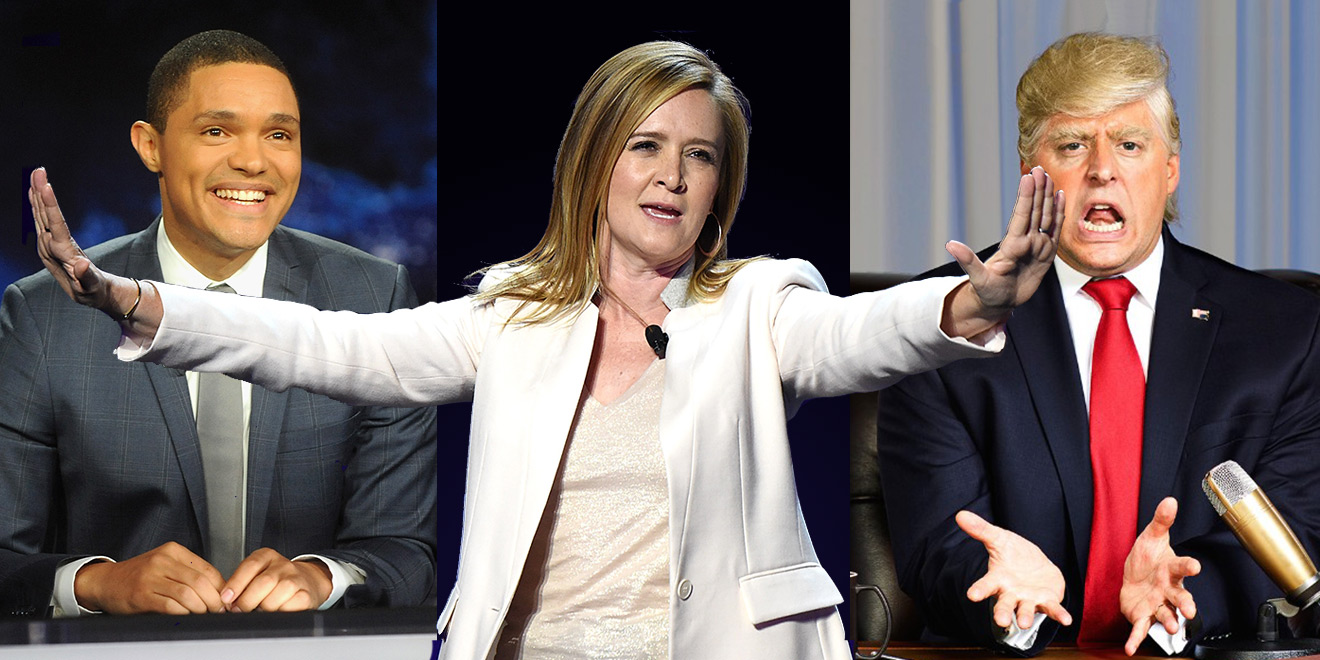 Writers for The Daily Show, Full Frontal and The President Show say they are struggling with new ways to poke fun at Donald Trump. Getty Images, Comedy Central

President Trump has fueled a surge in late-night ratings and ad revenue, but the writers behind many of those shows say they’d rather not have to cover the increasingly outlandish 24/7 news cycle of his presidency.

“I just find it exhausting. I don’t find it fun,” said Jason Reich, head writer of Comedy Central’s The Jim Jefferies Show of having to deal with all Trump, all of the time. “I don’t want this job,” added Hallie Haglund, a writer for The Daily Show with Trevor Noah.

Reich and Haglund were part of a group of late-night writers who spoke about their jobs in a Trump administration during the Television Critics Association’s summer press tour in L.A.

The writers, who represented late-night shows on Comedy Central and TBS, said that rather than providing them with plenty of material, the incessant nature of Trump-related churn has made their jobs tougher than ever. “It can also get really boring to deal with this same person who is provoking the same level of outrage with everything he does. To find a new way to go after that can be really boring,” said Haglund.

For comedy writers, “the challenge is always, ‘How do I heighten this?’” said Haglund of Trump’s tweets. Now, “there’s nothing left to do, because it’s so ridiculous.”

The writers agreed that whenever Trump tweets, their first reaction is not to think about the new material they’ll have for their next show. “You process it as a person first,” said Christine Nangle, head writer for Comedy Central’s The President Show. “My first thought is always, ‘We’re all going to die.’”

Because Trump so dominates the news cycle, the shows are always struggling with new ways to joke about him.

“One of the challenges is to try to avoid the low-hanging fruit of, this person talks funny or has funny hair,” said Nangle. “We try to look at what goes deeper than all that insanity. What made this man? And how are we implicated in this? As much as you can go deeper without being heavy-handed, that’s what we aim for.”

Ashley Nicole Black, a writer and correspondent for Full Frontal with Samantha Bee, said her show tries to look beyond the obvious punchline. “For everything that feels like a joke, there’s something that’s happening behind it,” she said. And given that Bee is the only female host in late-night, Black said there are always “stories that nobody is going to make funny that doesn’t have a uterus.”

Because Daily Show host Trevor Noah is South African, he doesn’t approach Trump-related topics with same partisan baggage as most others. “He grew up with apartheid, so he’s like, ‘Guys, it gets way worse,’” said Haglund. Because Noah’s audience is younger than previous Daily Show host Jon Stewart’s was, the show also strives to cover issues at face value. “There’s a lot more explaining we do on our show now.”

Another daily challenge is avoiding “the breathlessness of the coverage,” said Haglund, and the temptation to tear up an entire show to incorporate all of the news or tweets that emerge just prior to taping an episode.

The only advantage to what is occurring under President Trump, said Nangle, is that his win has “unearthed a part of our culture and country that people didn’t know existed.”

Nangle said The President Show doesn’t come out and tell Trump voters, “You’re so stupid, you got conned,” because people don’t want to hear that. Instead, “It’s trying to present from a different angle: this is what’s happening … see for yourself.” The show does that through its Forgotten Manatee character. “We’re just illustrating this guy doesn’t care about you. It’s a different way of trying to approach that idea,” said Nangle.

Still, given how bifurcated the media landscape is, that message might never be heard by Trump supporters. “I truly do not know if there’s a way to reach the other side,” said Black. “Their media diets are so separated.”

Added Reich, “we’re not really going to convert anyone, but we’re trying to point things out that people would have missed.”